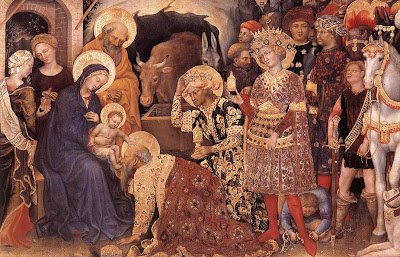 "And he saddled the ass, and set her upon it; and his son led it, and Joseph followed. And when they had come within three miles, Joseph turned and saw that Mary was sorrowful; and he said to himself: 'Likely that which is in her distresses her.' And again Joseph turned and saw her laughing. And he said to her: 'Mary, how is it that I see in thy face at one time laughter, at another sorrow?' And Mary said to Joseph: 'Because I see two peoples with mine eyes; the one weeping and lamenting, and the other rejoicing and exulting.'"

Christmas is a time for rejoicing, but for many people it is also a time for sadness - either as they mark the first time they have spent the holiday without a particular loved one or recalling painful memories. The above verse from a Jewish-Christian hagiography, intended to be a life of the Virgin Mary up to and until the point where she features in the biblical Gospel according to Saint Luke, is a very pretty and moving verse (I think), which captures the twin emotions Christmas can often invoke for people. In any case, I wish everyone the very best of Christmases and hope you and your family have been together and above all safe at this time of the year.

(For those wondering about the cryptic mention of Joseph's son guiding the donkey with the pregnant Virgin upon it, according to the earliest Christian sources Joseph had been married before his betrothal to Mary and by his first wife he had several sons and two daughters. The sons are mentioned elsewhere by name in the Bible as well, but it is clear that the recent attempt to suggest they were Mary's biological children, born after the Nativity in Bethlehem, is inaccurate, as shown by the fact that at the time of His Crucifixion, Christ entrusted His mother's well-being to his beloved disciple, Saint John the Evangelist, which he would have needed to do had she had other biological children of her own.)
Posted by Gareth Russell at 20:28