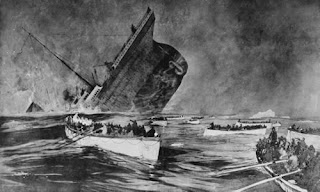 Today marks the ninety-ninth anniversary of the sinking of arguably the most famous ship in history - a 46,000-ton British passenger liner, the Titanic. Built in Belfast by the city's famous Harland & Wolff shipyards, Titanic was the second in a trio of sister ships built for the White Star Line between 1911 and 1915. Her elder sister, the Olympic, had garnered most of the lion's share of press attention for her maiden voyage in May 1911, but there had still been significant enough media interest when the Titanic set sail from Southampton on April 10th 1912, when her high quota of wealthy passengers allegedly led her to being nicknamed "the Millionaires' Special." At the time, she was the largest moving object on earth, eclipsing her big sister by just over one thousand tons thanks to the partial enclosure of the promenade deck and the addition of an  à la Carte restaurant and Parisian-style cafe for the first class passengers.
Four days later, after stop-overs in Cherbourg, France, and Queenstown, Ireland, the Titanic had collided side-on with an iceberg, resulting in over 300ft of the 882ft-vessel being opened to the freezing Atlantic waters. In keeping with the Board of Trade regulations at the time, the Titanic had woefully few lifeboats for the number of people on-board and due to the initial slow-moving tilt in the sinking ship and the fact that many of the passengers and crew had slept right through the collision, which caused no more than a shudder in most parts of the liner, many of the lifeboats initially left less than half-full.
The collision had occurred at 11:40 p.m. on Sunday April 14th and, as it approached 2 a.m., it became more and more clear to those still trapped on-board that the ship was doomed. As she began to sink further and further beneath the eerily calm waters, bow first, people began to hurl themselves overboard or rush to the stern as it slowly lifted out the ocean. According to an old but, I think believable, legend, the ship's band played the hymn Nearer My God To Thee, as the largest and most luxurious liner in the world disappeared beneath the waves.
Over fifteen hundred people perished when the Titanic sank on her maiden voyage; the seven hundred survivors were picked up at dawn by the Cunard liner, Carpathia, en route for a Mediterranean cruise. My late great-grandfather, who worked as a 7 year-old boy in the shipyards, could remember walking out into the streets of east Belfast on the morning of April 16th 1912 to see his father and all the great, burly men of the yard he worked with, huddled outside the local Presbyterian church sobbing at the news the ship they had built from scratch had sank with the loss of so many lives. Today, a memorial to the Belfast engineers who gave their lives trying to keep the power (i.e. light and heat) going for as long as the Titanic sank, sits outside Belfast City Hall.
Below is one of the most moving dramatisations of the Titanic's final moments from the 1958 movie A Night to Remember, produced by William MacQuitty, a Northern Irish movie producer who had actually seen the original Titanic launched in Belfast back in 1911. A Night to Remember is my personal favourite movie about the Titanic disaster and I would recommend it to anyone.
Posted by Gareth Russell at 23:52