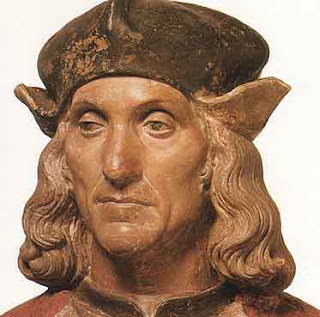 The death of Henry VII was, in many ways, the real death of the Middle Ages in England. No era ever truly dies, of course, unless it has been violently truncated, but having been born in a Welsh castle in 1457, Henry VII was the last leader of the nation to be born in what could indisputably be deemed the British Middle Ages. His path to the throne had been dangerous and his eventual triumph in 1485, when he won the crown in hand-to-hand combat at the Battle of Bosworth, had been improbable to say the least. In many ways, had it not been for the lethal incompetence of the House of York and the Machiavellian schemes of his mother, Henry Tudor might never have returned from exile in France, let alone seized the throne.
For the defeat and death of Richard III at Bosworth, Henry VII has never quite been forgiven by modern day adherents of the former, known as Ricardians. It's difficult, frankly, to see why, given that Richard himself had been more than capable of prosecuting similarly bloody conflicts against his own rivals in days gone by. Both Richard and Henry were products of the violent and duplicitous generation in English history known as "the Wars of the Roses," a name which endows the era with a poetic loveliness that it absolutely does not deserve. When the occasion called for it (and many times when it did not), Richard and Henry, as well as many of their contemporaries, were quite prepared to perpetrate deeds which violated the laws of church, justice and modern sensibilities.
Whatever one thinks of its beginnings, Henry VII's twenty-four year reign must be judged a political and fiscal success. Through shrewd and often dishonest manipulation of both the judiciary and the taxation system, the King had broken the power of the aristocracy, which had swollen to lethal proportions during the civil war. He had restored good government to his native Wales, he had ended definitively the possibility of the Rose conflict re-starting and he had left the monarchy secure, respected and, for the first time in a generation, solvent. By any impartial standards, Henry VII had been a successful monarch - intelligent, resourceful, determined and sober-minded. What he had not been was popular. And proof of this was given by the almost obscene euphoria with which the public greeted the accession of his son and replacement, the seventeen year-old Henry VIII.
Henry VII had been ailing since the spring of 1507, when he had apparently given up on the idea of marrying the Dowager Queen of the Naples, Giovanna. He had only been fifty at the time, but it was rumoured about the court within weeks that the King was suffering from consumption. The middle-aged monarch's health had become so frail that in Easter 1507, Candlemas 1508 and July of the same year, there had been very real fears that he was about to die. He rallied every time, but with each brush with death, the King became more and more devout. Perhaps tortured by the memory of the dishonest and amoral methods of financial extortion that he and his government had used to re-stabilise both the monarchy and the economy, Henry spent the winter of 1508 and the spring of 1509 performing penance. In his will, he insisted that any subject who had been unfairly squeezed by illegal taxation or fined unjustly by the government should be repaid and he left enough money for ten thousand Masses to be said for his soul in Purgatory. He pardoned all minor criminals and cancelled all existing fines owed to the Treasury lower than the sum of £15. On March 24th, the King collapsed and was taken to his bed. Within a week, the Venetian ambassador to London heard that there was no doubt that Henry was now "utterly without hope of recovery."