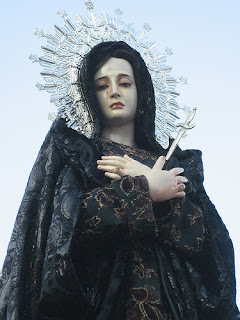 In honour of Mother's Day, which occurs today in the United Kingdom, I thought I would write very briefly on one of the most vibrant cultural developments in medieval Christianity - the emergence of the cult of the Mother of Sorrows. Also known as Our Lady of Sorrows or Our Lady of the Seven Dolours, the veneration of the Virgin Mary in her guise as a sorrowing mother was first given its own feast day by a church council at Cologne in 1413, when it was decreed by the Church that the third Sunday after Easter should be set aside to honour Our Lady of the Seven Sorrows. The decision to inaugurate another Marianist festival was primarily a response to the recent emergence in Bohemia of Hussitism, which denied the importance or utility of venerating the Virgin, particularly in relation to remembering the Passion.
However, prior to the fifteenth century, the Mater Dolorosa had already been de facto venerated by many European Christians, particularly in the north of the continent, where outbreaks of the plague were both more frequent and more virulent. The earliest recorded ceremonies to honour Mary as Queen of Sorrow however took place in the early 1240s in Italy, within a small monastic community called the Order of the Servants of Mary, who adopted as the symbol of their order the image of a weeping Virgin Mary standing beneath the blood-stained Cross. In time, the Seven Sorrows of Mary were defined as the day when God spoke through the Prophet Simeon to her in the Holy Temple in Jerusalem, her flight into Egypt in the wake of the slaughter of the Innocents in Bethlehem, the panic she felt at losing the Child Jesus during the Holy Family's pilgrimage to Jerusalem and then the final four were lifted from episodes in the Passion - seeing her Son carrying His Cross to Calvary, the Death of Jesus, Mary receiving the Body of Jesus into her arms and the burial of Jesus in the tomb provided for him by Saint Joseph of Arimathea.

The reason for the popularity of the cult in medieval northern Europe was directly linked to the ravages of the plague that region experienced for most of the period. It is for precisely that reason that we see an emergence of particularly graphic crucifixes at the same time, as well as the development of the iconography of the infamous danse macabre in England in the wake of the Black Death. Hussites and later critics of medieval Marianism missed the point in dismissing the veneration of the Virgin as "un-biblical." In the first place, given that the cult of the Mother of Sorrows orbited around seven Biblical episodes in Mary's life, it's unclear how exactly that criticism is true in this particular case, but secondly, it's worth remembering that in a world where literacy was low, life expectancy stunted and death, disease and incredible levels of physical pain were rampant, this manifestation of Christian devotion served a very real and practical purpose.
When I was seventeen, I wrote an article about Anne Boleyn's religion, much of which I do not agree with now, but I did touch on the cult of the Virgin of Sorrows in it and I would like to quote it now. If there any mistakes, I crave pardon for more youthful me. The phrase Mea Culpa springs to mind.

"When Anne Boleyn set foot on the European continent in 1513 she was one of millions of Europeans who had their entire spiritual identity validated by the Roman Catholic Church. The Mass, still in Latin, was heard every day and the ritual and ceremony of the Old Religion gave a rhythm and meaning to life. The centrepiece of any church was the altar, upon which rested the Blessèd Sacrament – the symbol of the Miracle of the Mass and the presence of Christ Re-Crucified for His people. Upon the Crucifix hung a depiction of Christ in His death throws – His side pierced by the soldier’s spear, His forehead repeatedly punctured by a crown of thorns, His hands and feet nailed to the Cross and His torso lacerated by the Roman whips. The same depiction of Christ was found in most devotional works like the Book of Hours, in which the tortured Christ – The Man of Sorrows – was shown in all His agony. For the Faithful at the time this was a comforting image rather than a grotesque one, for it reminded them of the earthly suffering of He who was had been Divine in origin but human through choice. When plague-sufferers entered churches in their eyes travelled upwards to the Crucifix where Christ’s body was contorted by His pain and they drew comfort from that because it showed their Saviour suffering with them, understanding their pain but promising salvation just as He had once promised redemption to the criminal who died alongside Him.

The artistic depictions of the Virgin Mary were no less graphic. Numerous festivals celebrated the significant stages of her life; Pope Sixtus IV had ordered that Feast of the Immaculate Conception to be celebrated every 8th December, although it was not a required article of faith until 1854 and medieval Catholics could chose whether to believe Mary was conceived without the stain of Original Sin or not. Equally, it was not until 1950 that Pius XII ruled that to be a Catholic one must believe that Mary’s body was assumed into Heaven, but the Feast of the Assumption was celebrated for centuries on 15th August. When the plague struck, just as the images on the Crucifix became more resonant, so too did the Cult of the Mater Dolorosa – the Virgin Mary in her role as the Mother of Sorrows – grow in its appeal. It showed the Virgin at the foot of The Cross, transfixed and imprisoned by her grief, sharing in the grief of all time and all places; at the same time, ornamental skulls were added to rosary beads, graphic crucifixes appeared everywhere and images of dancing skeletons were painted into iconography...

This was the ancient word of the One True Faith ... it was rich, mysterious and saturated with a barbarous opulence that simultaneously overawed and reaffirmed.... It was partially because of this absolute belief in Christianity and the necessity of pure religious observance that prompted the violence and polarisation of the Reformation"