"Choose Goodness": Reflections on the murder of Constable Kerr 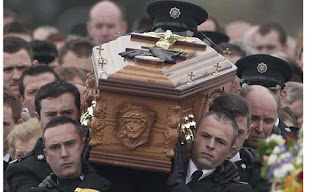 The recent murder of Catholic policeman, Ronan Kerr, has sparked revulsion across Northern Ireland, the United Kingdom and the Irish Republic. Across Ulster, protests and marches were held by the people to show their overwhelming rejection of the dissident IRA's murder of Constable Kerr, by a car bomb last Saturday. They have been known as "peace marches."
Speaking at Constable Kerr's (25) funeral at the Church of the Immaculate Conception in Beragh, County Tyrone, His Eminence Cardinal Brady, the Roman Catholic Archbishop of Armagh and the Primate of All Ireland, give the Catholic Church's unequivocal condemnation of the killing: -

"Parents and grandparents, I beg you: plead with your children and with your grandchildren not to get involved with violence. Never let them be deceived by those who say that Ireland will be united or the Union made more secure by war. They are wrong. It is an illusion. Violence has nothing, absolutely nothing, to offer except misery and destruction."

He called the dissident republicans' killing "an offence against God," and implored them, in God's name, "to choose goodness, choose peace." As a sign of how far the nation has come in the last decade, members of Constable Kerr's local Gaelic Atheltic Association (GAA) carried the coffin half the way to the cemetery, before yielding to officers from the Police Service of Northern Ireland (PSNI.) One was once a byword for Irish republican sentiment; the other once seen as the incarnation of official Unionism in Northern Ireland. Now, they helped carry the body of the same person to Saint Patrick's Cemetry. Amongst those carrying the coffin from the GAA was local sporting legend and manager of the Tyrone GAA, Mickey Harte, who only a few months ago tragically lost his only daughter, Irish beauty queen and newlywed Michaela, when she was murdered by robbers on her honeymoon in Mauritius. Tyrone is burying two young people in a short period of time; both senselessly and needlessly murdered. 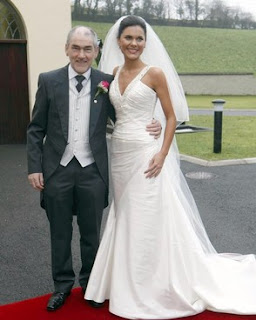 The funerals of Michaela McAreavy (seen right with her father  on the day of her wedding) and Constable Ronan Kerr were attended by all members of the community and leaders of both "sides" in scenes unimaginable only a few years ago. The current First Minister of Northern Ireland, Peter Robinson, leader of the strongly Unionist and right wing D.U.P (Democratic Unionist Party), sat near the prime minister of the Irish Republic, Taoiseach Enda Kenny, whilst the Moderator of the Presbyterian Church, Dr. Norman Hamilton, exchanged kind words with Cardinal Brady after the Requiem Mass. Former loyalist paramilitary, Jackie McDonald, attended, along with the leaders of Sinn Fein, Martin McGuinness and Gerry Adams. The world has changed.
After Constable Kerr's death, his mother, two brothers and sisters made an appeal for information and to encourage Catholics who have joined the police force not to be intimidated by the dissident IRA's threats to punish them for being "collaborators" with the British. Mrs. Kerr speaks with dignity, despite the tormented grief you can see in the faces of her children. And I think I would speak for the vast majority of my countrymen when I say that prayers for Mrs. Kerr, her surviving children and, of course, for Ronan, would be very much appreciated. RTE and The Daily Telegraph's coverage of the funeral can be seen below.
Posted by Gareth Russell at 00:48