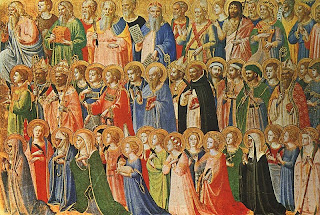 “May angels lead you into paradise;
May the martyrs receive you at your arrival,
And lead you into the Holy City of Jerusalem.
May a choir of angels receive you, and,
With Lazarus, who once was poor, may you have eternal rest.”
- From the 'In Paradisum' section of the Requiem Mass for the Dead

In certain parts of Ireland, the Saturday between Good Friday and Easter Sunday is sometimes referred to as "Black Saturday," because of the custom of visiting the graves of loved ones on the day when Christ was buried in His own tomb. Personally, I think the Russian Orthodox name for the day - "The Great Sabbath" - is more lovely, but "Black Saturday" is perhaps the name I am more familiar with.

As in Ireland, throughout Christendom the Great Sabbath is often kept as a day of remembrance and many people's minds naturally turn more to contemplating death on this day, much as it might on the Feast of All Souls on November 2nd.

As I was thinking about this day and how different people cope with death and loss, I remembered a deathbed letter I had once read by a 17th century princess that - along with the final letters of Katherine of Aragon, Marie-Antoinette and Bartolomé Blanco Márquez - probably rank as the most moving farewell letters I've ever had the pleasure to read.

The letter in question was written by a 70 year-old German princess, Elisabeth-Charlotte, who had spent the last fifty years of her life as a member of the French Royal Family, by marriage.

Born Elisabeth-Charlotte van der Pfalz in 1652, daughter of the Elector Palatine, Elisabeth-Charlotte was related by blood to most of the German royal and aristocratic houses. At the age of nineteen, she was placed into an arranged marriage with Philippe, Duc d’Orléans, the younger brother of King Louis XIV of France. Elisabeth-Charlotte, nicknamed “Liselotte” by her family, was required to convert from Lutheranism to Catholicism under the terms of the marriage contract – although, in later years, some doubted the sincerity of her conversion, noting that the princess did not seem particularly enamoured with her new religion. (She once complained that the Latin Mass was “nothing but vowels, like aaa eee ooo iii, which is enough to make one burst out of one’s skin with pure impatience!”)

Religion aside, Philippe and Liselotte were an ill-matched pair; her new husband was one of France’s most gifted and brilliant military leaders, but he was also a homosexual, and had for years been in love with the Chévalier de Lorraine. He had also been married before, to the late Princess Henriette-Anne of Great Britain, with whom he already had two daughters – Marie-Louise (the future Queen of Spain) and Anne-Marie (the future Queen of Sardinia.) Henriette-Anne had been beautiful, gracious, sophisticated and charming, the unacknowledged queen of Versailles society; Liselotte was, by her own admission, fat, boisterous, ugly and cursed like a sailor.

Yet, somehow, despite the personality clash, the marriage between the flamboyant, glamorous French prince and the earthy, no-nonsense German princess seemed to work and, by the end of their lives together, they had become firm friends, if nothing else. Taking her marriage vows seriously, she never took a lover or betrayed her husband in any way and he, in his turn, gallantly protected her from the intrigues launched against her by the glitterati of Versailles. In time, she even came to tolerate his love affairs, gamely telling one of her husband’s male lovers: “You are welcome to gobble the peas, for I don’t like them.”

Despite her unattractiveness and his sexuality, Philippe and Liselotte also had three children together – Alexandre, who died young, Philippe, the future Regent of France, and a daughter, also called Elisabeth-Charlotte, the future Duchess of Lorraine and grandmother of Queen Marie-Antoinette.

Living in retirement as a widow at the palace of St.-Cloud by the time this letter was written, the 70 year-old princess had written thousands of letters back to her relatives in England and Germany over the last half-century. This, the last letter she ever wrote, was to her half-sister, Louisa. Like Liselotte herself, it was sincere but unsentimental; there were no promises that she would change her lifestyle and have a "Road to Damascus"-style change if God spared her life and she showed no fear or undue hysteria at the prospect of dying, without quite giving up on the idea of life either: -

The news of my health today will not, I expect, please you at all. I am getting more miserable day by day, and this may well come to a bad end, but I am, thank God, ready for everything and only beg God Almighty to give me patience in the great pain I must suffer day and night, not only because I am so horribly weak but because I am increasingly miserable all over. Whether I will get out of this God alone knows; time will tell, but I have never been as sick as this. The weather here is not bad, but today it is starting to rain, just a little drizzle. I do not think that any kind of weather will be able to help me now. Time, dear Louisa, will soon show what is to become of all this. If I get out of this you will always find me as I have been all along. If God calls me to Himself, you must take comfort in the thought that I die without regret or sorrow, happy to leave this world in the hope that my Redeemer, who has died and risen for me, will not forsake me and that since I have kept my faith in Him, He will have mercy on me in my last hour. In this trust I live and die, dear Louisa! For the rest, it will have to be as God wishes. Many people complain about coughs and colds now; I am sicker than that and getting worse day by day... Here they are bringing me another of your welcome letters of 21 November, number 83, but I cannot possibly answer it, I am just too sick ... But if God grants me life until the day after tomorrow, I shall answer it; all I can say for now is that until my end I shall dearly love you.

Liselotte.
Posted by Gareth Russell at 00:15