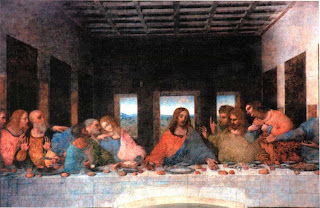 “This is my commandment: that ye love one another, as I have loved you. Greater love hath no man than this – that he lay down his life for his friends.”
– The Gospel according to Saint John, Chapter 15

Maundy Thursday, the fifth day of Holy Week, is known by a variety of names throughout Christianity - including "Holy Thursday," "Covenant Thursday," "Great and Holy Thursday," "Green Thursday," and the "Thursday of Mysteries," which is perhaps my favourite name for the day. The name by which it is most famously known in the English-speaking world, however, is "Maundy Thursday," which comes from the Latin word "mandatum," which is the first phrase of the above passage from the Bible, when Christ spoke to the Apostles at the Last Supper, saying: “This is my commandment: that ye love one another, as I have loved you." (Or, in Latin, "Mandatum novum do vobis ut diligatis invicem sicut dilexi vos".)

Known as "Maundy Thursday" throughout the Anglo-Norman world, the Thursday of Holy Week is a busy day scripturally - for it marks the Last Supper (and thus the institution of Christianity's most important Sacrament - Holy Communion), Jesus's sorrow in the Garden of Gethsemane, the "Judas Kiss," Christ's arrest, His brutalisation by the Sanhedrin's soldiers and His first interrogation.

Historically, Maundy Thursday has given rise to a number of interesting traditions and practices. Bulgarians traditionally paint their Easter Eggs on Maundy Thursday, whilst Swedish children dress-up and go "trick or treating" in search of money or sweet for Easter Sunday. In the Philippines, where Holy Week is celebrated with special intensity, all newspapers cease publication between Maundy Thursday and Black Saturday, whilst most businesses also close down, going into a form of mourning, and in Slovakia, Luxembourg and the Czech Republic, Catholic churches cease to ring their bells until dawn on Easter Sunday. Many Christians also go on a form of pilgrimage on Maundy Thursday, moving between seven churches across the course of the day - a practice which has its origins in Rome, where, on Maundy Thursday pilgrims progress between Saint Peter's itself, the Papal Archbasilica of Saint John Lateran, Santa Maria Maggiore, the Basilica of Saint Paul Outside the Walls, San Lorenzo fuori le Mura, the Basilica of the Holy Cross-in-Jerusalem and San Sebastiano ad Catacumbas. In 2000, Pope John Paul II changed the final church from San Sebastiano to the Sanctuary of the Madonna of Divine Love, but most pilgrims still prefer to visit San Sebastiano, as their ancestors have done for centuries. 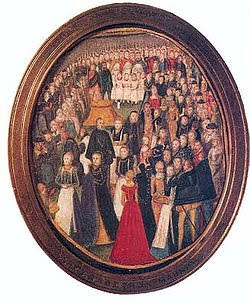 Perhaps one of the most interesting Maundy Thursday customs originates here in the United Kingdom, when the monarch bestows alms or "Maundy Money" on a group of pensioners - one for each year of the Sovereign's life. A special church service is held in a cathedral in either England or Wales, where the Queen hands out specially-minted coins to a group of pensioners, who have been invited to the service by local authorities. (In 2008, the Maundy Thursday service was held in Northern Ireland for the first time, at Saint Patrick's Cathedral, Armagh.) The custom itself dates back to the time of King Edward I, who ruled England from 1272 until his death in 1307. He was also the conqueror of Wales, hence the custom of using Welsh cathedrals for the Maundy services as well. From then, until the deposition of King James II in 1688, the main part of the tradition was for the monarch to humble his- or herself by washing the feet of the twelve local paupers who had been gathered for the service, along with bestowing generous amounts of charity upon them. The washing of the feet was done to imitate Christ's act of loving humility, when He washed the feet of His own apostles at the Last Supper. Bearing in mind how filthy the feet of a pauper in the Middle Ages would have been, the royal Maundy traditions indicate just how passionate a hold Christianity had over the hearts and minds of people in that era. One of the most diligent practitioners of the Maundy Thursday washing of feet was apparently Queen Elizabeth I (r. 1558 - 1603) and it was from her reign that we owe an image of the custom being carried out, painted by the great female artist, Levina Teerlinc. Elizabeth who, as ever, wore black to church during Lent, had a white apron tied around her waist by a lady-in-waiting and would kneel at the paupers' feet, washing them with water from a silver ewer and bowl, whilst dispensing a large amount of alms to them - the precise amount of which had been set during her mother's time as queen. Elizabeth, who was a devout Anglican, would "take her almost mystical role in this ritual very seriously".

In its original form, the practise was last carried out in England on Maundy Thursday 1688, by King James II, a pious but unpopular Roman Catholic and his lovely Italian queen, Maria-Beatrice of Modena. When James was deposed by his Protestant nephew, William of Orange, the washing of the feet on Maundy Thursday was discontinued by the new King, who apparently regarded it as sentimental nonsense of little practical value to any 'real' Christian. Aside from anything else, "people skills" were not one of William's strong points and he was uncomfortable around strangers and it was William's wife and co-ruler, Queen Mary II, who instituted the current tradition of the money being handed out to the elderly, rather than the poor, which continues to this day.
Posted by Gareth Russell at 18:12