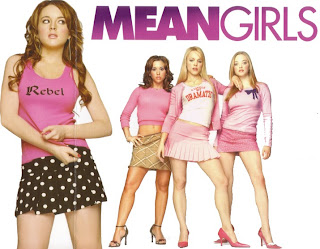 “I know she's kind of socially retarded and weird, but she's my friend... so, just promise me you won't make fun of her!”
- Regina George (Rachel McAdams), Mean Girls (2004)

Unlike most other movies in its genre, Mean Girls isn’t about some faux-ugly teenage girl who, with the help of a hardened jock who falls inexplicably in love with her once he gets bored of dating the cheerleaders, suddenly becomes beautiful, radiant and beloved, all the while simultaneously and paradoxically proving that it’s what’s on the inside that counts. Instead, Mean Girls is a tongue-in-cheek comedy-drama about a 16 year-old girl called Cady (Lindsay Lohan), the child of two travelling academics, who is about to go to an American public high school for the first time.

There, clueless, plaid-wearing Cady is befriended by the indie kids, Janis and Damien (Lizzie Caplan and Daniel Franzese), who explain to her how the pecking order at North Shore High works. However, since she is a “regulation hotty,” Cady soon attracts the notice of North Shore’s manipulative Queen Bee, Regina George (played superbly by Rachel McAdams.) Spurred on by her indie friends, who want Cady to gather information on “the Plastics,” so they can laugh together later about the popular girls inane lifestyle, Cady reluctantly begins to eat lunch with at Regina’s table, hang-out with them and, bit by bit, she becomes sucked into the intoxicating, gossip-riddled world of the teen it-crowd – including falling for Regina’s ex-boyfriend, school sexpot Aaron Samuels, (Jonathan Bennett) and stirring up trouble between Regina and her brilliantly played sidekicks - “totally rich” Gretchen Wieners (Lacey Chabert) and “the dumbest girl you will ever meet,” Karen Smith (Amanda Seyfried.)

Now, I absolutely love Mean Girls – unsurprising, I know. Yes, I hate the ending, but then, who doesn’t? But long before Tina Fey was famous for her side-splittingly hilarious impersonations of Vice-Presidential contender, Sarah Palin, on Saturday Night Live ,she was critically acclaimed for writing this funny, bitchy exposé of high school cliques and popularity contests. (She also plays the schools Maths teacher, Miss Norbury.) Sadly and probably quite dysfunctionally, Mean Girls makes me miss school and the glory days of secret house parties, sexuality panics, dress code fears, crash dieting, needlessly overcomplicated scheming and the endless deliciousness of being slightly ridiculous on a daily basis – oh... to be 17 again. Also, another very good movie. (See what I did there?)
Posted by Gareth Russell at 00:18