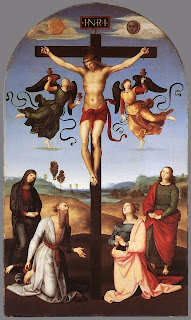 “Now there stood by the Cross of Jesus, His Mother, His Mother’s sister, Mary the wife of Cleopas, and Mary, called The Magdalene.”
- The Gospel according to Saint John, Chapter 19

"What must have been her gifts, who was chosen to be the only near earthly relative of the Son of God, the only one whom He was bound by nature to revere and look up to; the one appointed to train and educate Him, to instruct Him day by day, as He grew in wisdom and stature?"
- Cardinal John Henry Newman (1832)

Good Friday, the day which marks the Passion and Death of Jesus Christ, has been the subject of many excellent spiritual reflections and one in particular that I would recommend is posted on Elena Maria Vidal's blog Tea at Trianon .

Since the significance and emotion of Good Friday as an event has been covered elsewhere, I would like to briefly focus on a secondary figure in the Passion narrative: - Christ's mother, the Virgin Mary. She stood at the foot of the Cross on the day her Son was tortured to death, showing heroism and the depths of maternal love in being with Him, even when we cannot imagine what pain that sight must have cost her. It is perhaps revealing that, with the exception of the loyal Saint John the Evangelist, none of the other Apostles had braved attending the Crucifixion and the only people who were there were "the Three Marys" - Christ's mother, aunt and follower, Saint Mary Magdalene, who would earn the later sobriquet of "Dulcis Amica Dei," for her loyalty ("Sweet Friend of God.")

Many years earlier, when she was a young mother, the Virgin Mary had visited the Temple with her Son. In an astonishing breach of etiquette, an old man, a temple prophet named Simeon, approached her and by-passed her husband, Joseph, to speak directly to Mary herself, pointing to her Son and then to her, saying: "Behold! This Child is set for the fall and rise of many and as a sign to be opposed - and a sword shall pierce your own soul - so that the thoughts of many hearts may be revealed!"

Some of my coreligionist friends have insisted to me that Mary was nothing but an ordinary woman. I'm sorry, but she was nothing of the kind. Leaving aside how any Christian could possibly look at the woman who God chose from the women of all-time and all-places to be the earthly mother of His Son and still call her "ordinary," at whose intercession Christ performed His first recorded miracle, and even if we do not consider the extraordinary story of her life, which is without equal in human history, how many of us could possibly have carried on with the courage to live and love and believe, when we had a dread prophecy like Simeon's hanging over our head for decades? How many of us could have continued to praise God's Name, knowing that He had given us a child whose destiny was to die?

Neither in life nor in character could the Virgin Mary be, by any stretch of the imagination, called "ordinary." To echo the Archangel's words, she was, in every sense, a lady who was truly "full of Grace" and on no occasion did she show the greatness of her heart and mind more than on Good Friday, when she gave what the poets call 'the last gift of love' - grief - and stayed with her Son, even in extremis, and then, when it was all over, she sat and cradled His dead body in her arms, symbolising the pain and loss of any mother who has ever lost a child.
Posted by Gareth Russell at 15:44