The kindness of Marie-Antoinette 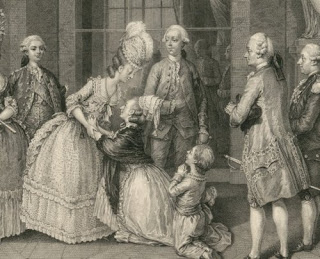 The site Vive la reine (via Tea at Trianon) reports on one eye-witness account of Marie-Antoinette's compassion towards the less-fortunate. Although it's a side of the Queen almost never reported in modern accounts of her, Marie-Antoinette's kindness and empathy was considered to be one of her most dominant (and endearing) features by her close friends and servants. One of Marie-Antoinette's modern biographers writes, "Marie Antoinette further established her public reputation for sweetness and mercy by stopping her carriage for over an hour to aid an injured postilion. She would not continue until she had established the presence of a surgeon. She then insisted on a stretcher for the injured man ... This behaviour was much acclaimed... When a peasant wine-grower was gored by a stag during the royal hunt, [Marie Antoinette] conveyed the unfortunate man in her own coach, while making arrangements for the family he left behind and for his ruined crops. Wide publicity was given to this scene [and]... For once publicity did not lie. The impulse of compassion was genuine enough and was deeply rooted in Marie Antoinette's character. 'She was so happy at doing good and hated to miss an opportunity to do so,' wrote Madame Campan of a much later occasion when some country people addressed to her a petition on the subject of a predatory game-bird, reserved for the King's sport, which was destroying their crops. Marie Antoinette ordered the bird to be destroyed. Six weeks later, when the arrival of a second petition made her aware that her orders had not been carried out, she was upset and angry... [but] Marie Antoinette's insistence on personal involvement in humanitarian exercises - a tradition in which she had been brought up in Vienna - was privately thought to be rather unnecessary at Versailles."
The illustration above shows Marie-Antoinette with the Bellegarde family, after she secured Monsieur de Bellegarde's liberation from jail after he was imprisoned on unjust charges.

"Marie Antoinette reigned not only by her grace, but by her goodness. … She obtained a new hearing in the case of Messieurs de Bellagarde and de Moustiers, who had been pursued by the spite of the Duc d’Aiguillon; and when their innocence had been established, the two prisoners, set at liberty, came with their wives and children to thank their benefactress, she replied modestly that justice alone had been done, and that one should congratulate her only on the greatest happiness arising from her position - that of being able to lay before the king just claims.
As a token of gratitude, Madame de Bellegarde had a picture painted in which she was represented with her husband kneeling before the queen … the queen was greatly touched, and placed the picture in her apartment."
-The Life of Marie Antoinette, Volume 1 by Maxime de la Rocherterie