The reasons for Purgatory 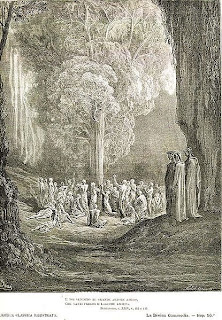 Often rinsed by Protestants as the most ludicrous of "non-Scriptural" Catholic ideas, Catholic bloggers From Burke to Kirk and Beyond discusses some very interesting theories for the practical justification of the theology behind Purgatory, in light of the recent child abuse scandals in America. It's also worth noting that some Protestant theologians, including C.S. Lewis, an Ulster-Protestant and Anglican, did eventually come to believe that Purgatory not only existed but was fundamentally necessary to make the entire Christian interpretation of Salvation and eschatology work.

"Of course I pray for the dead. The action is so spontaneous, so all but inevitable, that only the most compulsive theological case against it would deter me. And I hardly know how the rest of my prayers would survive if those for the dead were forbidden. At our age, the majority of those we love best are dead. What sort of intercourse with God could I have if what I love best were unmentionable to him? I believe in Purgatory. Mind you, the Reformers had good reasons for throwing doubt on the 'Romish doctrine concerning Purgatory' as that Romish doctrine had then become.....Our souls demand Purgatory, don't they? Would it not break the heart if God said to us, 'It is true, my son, that your breath smells and your rags drip with mud and slime, but we are charitable here and no one will upbraid you with these things, nor draw away from you. Enter into the joy'? Should we not reply, 'With submission, sir, and if there is no objection, I'd rather be cleaned first.' 'It may hurt, you know' - 'Even so, sir.' ... My favourite image on this matter comes from the dentist's chair. I hope that when the tooth of life is drawn and I am 'coming round',' a voice will say, 'Rinse your mouth out with this.' This will be Purgatory..." - C.S. Lewis, Letters to Malcolm: Chiefly on Prayer (published posthumously in 1964)

"In the noblest, most circumstantial, and most theologically sophisticated of all medieval visions of the other world, Dante's Commedia, Purgatory is unequivocally a place of hope and a means of ascent towards Heaven. It thus has nothing in common with Hell. Before Dante begins the ascent of the Mount he is reclothed in the rushes of repentance, his face washed free from the grief and horror of Hell with the cleansing dew which distils in the clean air of Purgatory... From this Purgatory the devils are barred by protecting angels, and although all the souls whom Dante encounters are suffering, their sufferings are eagerly embraced and impatiently returned to, for they lead the soul through a pedagogy of love to the vision of God... For in Purgatory as in Heaven every soul lives and moves within the love that moves the sun and other stars: charity is the life of Purgatory." - Professor Eamon Duffy, The Stripping of the Altars: Traditional Religion in England, c. 1400 - c. 1580 (1992)

In relation to the horrifying scandal of Jerry Sandusky, From Burke to Kirk and Beyond rejects the modern Protestant idea of the "born-again" experience or of justification by faith alone, when he writes: -

"If the allegations against Jerry Sandusky are true and backed by believable and admissible evidence, Clarence Darrow would not be able to save him from severe punishment. He is likely to spend the rest of his life behind bars, and sex offenders are often given the worst treatment by jailers and the jailed. At the moment, he is spinning for the best jury he can hope to have. But in the end, he is likely to go to jail. What then? He might become penitent in the penitentiary. Understandably, many of those whose lives he ruined will be angry with anything short of the death penalty.

What I am seeing and hearing, not from all but from a large number, is a sanctimoniousness that is palpable. People want vengeance and cannot imagine themselves missing the mark as McQueary apparantly did, and certainly not falling into some sort of predatory, addictive sin as Sandusky apparently did. Some folks on a radio call-in show today were smugly confident that if they had been Mike McQueary they would beaten up Sandusky and saved the children as if they were heroes in a cartoon. Unless you have experience with sexual abuse, you (and I) would likely walk away and ask: "Did I really just see what I just saw?" Most of us would keep silent rather than become a pariah in our hometown and a persona non grata in the profession of our dreams.

There is plenty of talk about jailing McQueary while cutting Sandusky open with a dull knife, but for those of us who pray for the prisoners and ask God to set them free, we pray that Sandusky (as well as his enablers) turns his face to God. Being that neither he nor we are pure and ready to rub elbows with the heavenly host, we believe that he, like the thief on the cross, will be forgiven if his contrition is true.

And in the words of a Irish priest I know who readily admits to a bitter and hateful former life as an IRA activist, "I not only believe in Purgatory, I'm counting on it.""

Far from offering the "get out of jail free card" which zealous objectors to the idea of Purgatory so often accuse it of, Purgatory may in fact represent the most complex and often unsettling idea of Christianity's views on forgiveness and redemption.
The full article can be accessed here and was accessed by me via Tea at Trianon.
Posted by Gareth Russell at 22:50