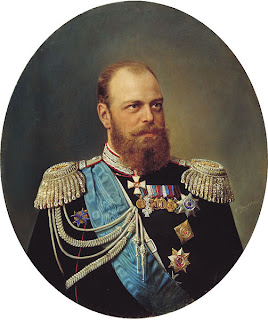 "God, God, what a day! The Lord has called to Him our adored, our dear, our tenderly loved Papa. My head turns, it isn't possible to believe it." - Alexander III's son and successor, Tsar Nicholas II (1894)

Alexander III, forty-nine year-old Emperor of All the Russias for the last thirteen years, had ignored the advice of his doctors concerning his frequent insomnia, headaches and sore legs. They had advised their imperial patient to go and rest at Livadia, the Imperial Family's summer palace by the sea in the beautiful Crimea region in the south. Tsar Alexander, obstreperously distrustful of doctors and adverse to any sign of weakness, insisted upon sticking to the traditional schedule and instead went to Spala, his isolated hunting lodge in Russian-occupied Poland. There, the six-foot-four emperor continued to deteriorate and eventually his wife, the Empress Marie, summoned a medical expert from Vienna, Professor Leyden. The professor's diagnosis was grim and uncompromising. His Imperial Majesty had incurable nephritis, an inflammation of the nephrons of the kidneys, which would eventually prove fatal. Conceding defeat, Alexander left Spala to make the one thousand-mile journey to Livadia.