The Kings and Queens of Scotland 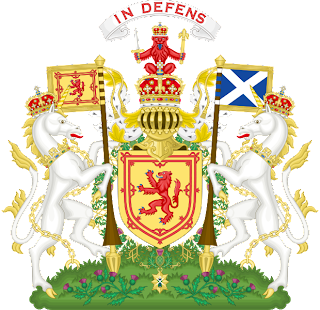 The exact date at which Scotland became unified under one monarchy is still a matter of debate amongst historians. Local leaders and kings had certainly been calling themselves kings of Scotland or Caledonia (the Latin name for Scotland) for generations, but historians would usually date the beginnings of the Scottish crown and nation either to 834, the reign of King Aodh or to 1016, when Malcolm II assumed power in Lothian and the geographical region we now know roughly as the kingdom of Scotland came into proper existence.
The first royal family, the House of Alpin, were the hereditary rulers of the Scottish kingdom of Dalriada, a kingdom which also had roots in Ulster, which is why one of Northern Ireland's best grammar schools is named in its honour. In 1603, after years of rivalry between the two nations, Scotland technically "conquered" England when its royal family, the Stewarts (spelt "Stuart" in England and France), inherited the English and Irish thrones after the death of the childless Queen Elizabeth. However, after that the royal family spent almost all of their time south of the border. Charles II was the last monarch to be crowned separately in both England and Scotland in 1651 and in 1707, the two crowns technically merged under Queen Anne to become the monarchy of Great Britain. This list will go right the way up to Anne, giving the numbers of the monarchs as they were known in Scotland. 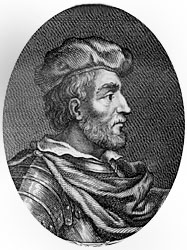 DUNCAN I, sometimes known as "the Gracious" or "the Diseased" (1034 - died violently in 1040) Perhaps most famous today for Shakespeare's dramatisation of his murder in Macbeth, Duncan was married to an English aristocrat, Sybilla of Northumbria, the first Scottish queen consort whose name we know for certain.
MACBETH (1040 - killed in battle in 1057) He married Gruoch, Dowager Lady of Moray.
LULACH, sometimes known as "the Simple" (1057 - died violently in 1058) The stepson of King Macbeth and the child of Queen Gruoch by her first marriage, Lulach succeeded his stepfather, although the denouement of Macbeth which sees Duncan's son, Malcolm, reclaiming the throne is not totally inaccurate. However, it was Lulach who was replaced by Malcolm, not Macbeth.
MALCOLM III (1058 - killed in battle in 1093) He was married twice. Firstly to Ingibjorg of Halland, Dowager Countess of Caithness and after her death to an Anglo-Saxon princess, Margaret of Wessex, who was subsequently canonised in the Roman Catholic religion by Pope Innocent IV. He was the father of four subsequent kings of England and one queen of England.
DONALD II (1093 - 1097) Best known as the figure of Prince Donalbain in Macbeth, Donald II usurped the throne after his brother Malcolm's death and this ushered in a time of chaos for the monarchy, with several claimants from the royal family alternately holding various types of authority.
DUNCAN II (1094) Duncan's reign was brief and ended with his death in battle. He was married to Lady Octreda of Northumbria.
EDGAR (1097 -1107) His succession brought to an end the chaos which had arisen since his father's death.
ALEXANDER I, sometimes known as "the Fierce" (1107 - 1124) He was married to Sybilla, an illegitimate daughter of King Henry I of England.
DAVID I, despite never being formally canonised he was known as "the Saint" by some of his Scottish subjects, like his mother Queen-Saint Margaret (1124 - 1153) As Earl of Huntingdon, he played a pivotal role in the English civil war in the mid-twelfth century. He acquired the title through the intercession of his sister and his marriage to Matilda, Dowager Countess of Huntingdom and Northampton.
MALCOLM IV, known as "the Maiden" or "the Virgin" (1153 - 1165) He never married.
WILLIAM, sometimes known as "the Lyon" (1165 - 1214) He married Ermengarde de Beaumont-le-Maine
ALEXANDER II (1214 - 1249) He married twice. His first wife was Princess Joan of England and his second was Mary de Coucy, subsequently a princess of Jerusalem.
ALEXANDER III, sometimes known as "the Glorious" (1249 - killed in a riding accident in 1286) He was married firstly to Princess Margaret of England and, after her death, to Yolande de Dreux, subsequently Duchess of Brittany.
MARGARET, sometimes known as "the Maid of Norway" (1286 - drowned in 1290)
The sinking of the ship carrying the young Queen Margaret led to a period of crisis for the Scottish crown, known as the First Interregnum (1290 - 1292), in which there was no sovereign. The controversial decision to involve the English monarchy as arbiter of the various claimants' cases produced generations of hostility between the two countries and the rather fanciful modern take on Braveheart.
THE HOUSE OF BALLIOL
(1292 - 1296) 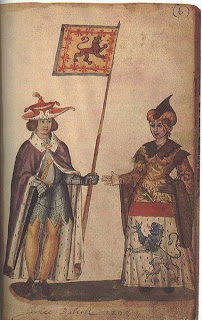 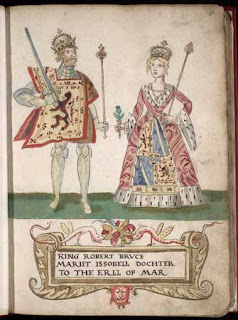 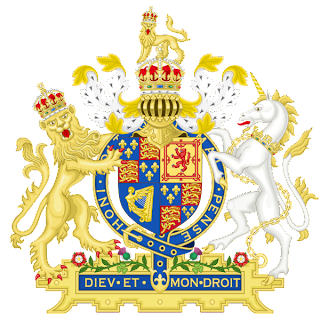 ROBERT II (1371 - 1390) He was married twice. His first marriage to Elizabeth Mure may have been canonically invalid. His second marriage to Lady Euphemia de Ross was valid in all eyes, although there were some who considered the issue of King Robert's union with Elizabeth to have seniority over those born from his marriage to Queen Euphemia.
ROBERT III (1390 - 1406) He married Annabella Drummond.
JAMES I (1406 - murdered in 1437) He married Lady Joan Beaufort.
JAMES II (1437 - killed in battle in 1460) He married Mary of Gueldres.
JAMES III (1460 - murdered in 1488) He was married to Margaret, Princess of Denmark, Norway and Sweden.
JAMES IV (1488 - killed in battle in 1513) He was married to Princess Margaret Tudor of England. After he was defeated and killed at the Battle of Flodden, Katherine of Aragon sent his blood-stained coat as a trophy to her husband, King Henry VIII, who was fighting a far with Scotland's ally, France.
JAMES V (1513 - 1542) He was married firstly to Princess Madeleine de Valois of France and after her death, allegedly caused by her fragility and the Scottish climate, he married one of France's premier aristocrats, Marie de Guise, Dowager Duchesse de Longueville.
MARY I, more often known as "Mary, Queen of Scots" (1541 - overthrown in 1567) She was married three times. Her first husband was Francis II, King of France. After his death, she returned to Scotland where she assumed personal control of her government and married her cousin, Henry, Lord Darnley, Duke of Albany, Earl of Ross and Baron Ardmannoch. It was at this stage that the family's name technically came to be spelled as "Stuart," the version used by Darnley's branch of the family. After his murder, Queen Mary married James Hepburn, Earl of Bothwell. She was forced to abdicate after a rebellion against her rule in 1567. She subsequently fled to England, where she was beheaded in 1587 on grounds of alleged treason.
JAMES VI, known as James I in England after 1603 (1567 - 1625) He succeeded to the English and Irish thrones in 1603. He was married to Anne of Denmark, Princess of Denmark and Norway.
CHARLES I (1625 - 1649) The last British sovereign to be born in Scotland, it was ironically a Scottish-Presbyterian rebellion against his religious policies which first led to Charles I's downfall and the ensuing civil war. He was married to Henrietta-Maria, Princess of France and Navarre. Canonised in the Anglican Church, he was beheaded by an illegally-convened parliament in 1649.
CHARLES II (1649 - 1685) Scotland did not recognise the authority of Cromwell or the English parliament to abolish the monarchy in Scotland as it had done in England. This led to the coronation of Charles II on Scottish soil in 1651, although Oliver Cromwell's armies forced the King to flee to the protection of his Dutch and French in-laws for most of the rest of the decade. He was restored to the British thrones de facto in 1660 and he was married to Catherine of Braganza, Princess of Portugal.
JAMES VII, known as James II in England, Wales and Ireland (1685 - 1688) James was married twice - firstly to Lady Anne Hyde and after her death as a result of breast cancer to Maria-Beatrice d'Este of Modena. James's de facto rule came to an end when he was forced to flee in 1688 and then formally deposed by act of Parliament in 1689. Again, many in Scotland objected to this move and although some refused to support James's Catholic descendants, the kingdom was the scene of two attempts to put the male line of the Stuarts back on the throne in 1715 and 1745. Both ended in failure.
WILLIAM (III in England, Wales and Ireland) and MARY II (1688 - 1694/1701) The seizure of the throne by a Dutch prince and his Stuart wife was controversial in Scotland, although many Protestants reluctantly welcomed it. Mary, who died in 1694, was Mary II in all of her kingdoms, because she followed from Mary Tudor, who had ruled in England and Ireland from 1553 to 1558, and Mary Queen of Scots, who had ruled in Scotland from 1542 to 1567. After her death from smallpox in 1694, William III ruled alone until his death in a riding accident in 1701.
ANNE (1701 - 1714) She was married to Prince George of Denmark, who his uncle-in-law Charles II famously dubbed the most boring man he had ever met. Under Anne's rule, the crowns of England and Scotland were legislatively unified into those of Great Britain. They became those of the United Kingdom when Ireland's was joined by its own act of Union in 1800.
Posted by Gareth Russell at 22:59