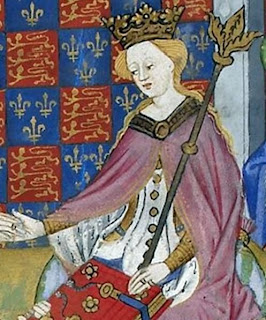 There's a fascinating theme that pervades Phyllida Lloyd and Abi Morgan biopic The Iron Lady. The movie is not really about Margaret Thatcher's controversial political career, but rather about a powerful life at its tail ends. The Iron Lady is about a woman who once wielded enormous influence, but who is now settling slowly into her twilight. A quiet end to a noisy life. And it's that same feeling which comes across when looking at the final years of another iron lady, another power player, another Margaret, who died on this day in 1482.

Marguerite of Anjou was only fifty-two years old when she passed away at the chateau of Dampierre, three miles from the winding course of the River Loire. She had already outlived her husband, King Henry VI of England, who had ended his life eleven years earlier as a murdered victim of the Tower of London, and her only child, Prince Edward, who had fallen in battle against the House of York in the same year. Since then, Marguerite had been driven back to her native France, where she endured financial humiliation and poverty. Forced to abandon her household and ancestral castles because she could not afford their upkeep, she was eventually granted asylum at Dampierre by the kindly Seigneur de Morains, a friend of her late father's.

Marguerite was, and is, a controversial queen consort. The daughter of a French princeling who had a claim to the throne of the Naples, she was married to the deeply religious and mentally-imbalanced King Henry VI when she was fifteen years old. Strikingly beautiful, Marguerite also had an iron will and tenacity that her husband lacked. More than one observer made the catty remark that the House of Lancaster might have kept the throne if the genders of the King and Queen had been reserved. Whatever Marguerite privately thought of her husband's increasingly bizarre pieties, she was never anything less than totally loyal to him. She struggled valiantly, and sometimes savagely, to hold the monarchy together when Henry became to suffer the first of his frequent nervous breakdowns and states of mental paralysis. Sensing an opportunity to advance their own power, the King's cousin, the Duke of York and his family, began to make moves through parliament and then militarily to oust Henry from the throne and put a York in his place. Marguerite fought them every single step of the way.

The Yorks lost no time in portraying the foreign-born and high-handed Marguerite as a "she-wolf," the veritable re-incarnation of the wicked Isabella of France, who had overthrown and murdered her husband Edward II back in 1327 and then brazenly ruled alongside her adulterous lover. At times, Marguerite did nothing to dispel their propaganda against her. When her armies defeated those of the Duke of York, she had his head sent back to the gates of York wearing a paper crown, grimly joking that it was the only crown he would ever wear. His son, however, got his hands on the real thing soon after and drove Marguerite and her family into exile.

Nine years later, she was back - after orchestrating probably the most audacious allegiance-flipping coup in history - having stolen the Yorks' former chief ally, the Earl of Warwick, and returning with his army at her back. She briefly managed to put Henry back on the throne, before Edward IV and the Yorks staged a counter-coup, in which Marguerite's 17 year-old son was killed fighting and her husband was almost certainly murdered directly on Edward IV's orders. With her family dead and her forces annihilated, Marguerite crept back to France, where her life slipped quietly, and tragically, to its close. When she died, the only thing of value that she still owned were her pack of hunting dogs. They were taken after her funeral by King Louis XI, who had treated Marguerite shamefully and miserly for the last decade.

Her body was taken to the Cathedral of St.-Maurice d'Angers, where she was buried next to her father, the erstwhile King of the Naples, and her mother, the Duchess of Lorraine. Few lives offer a better picture of the political instability that shattered England in the 1400s. For centuries after her death, she was painted as a vindictive harpy who had schemed and seduced her way through English politics, dragging her pathetic but holy husband along behind her. (Much the same personality would later be transposed onto her successor, Queen Elizabeth Woodville, whose life was to end in not-dissimilar circumstances.) Politically unwise and often ruthless, Marguerite was nonetheless no more of a "monster" than any of her contemporaries - and her actions certainly compare favourably to some of those carried out by Edward IV or Richard III.

Surrounded by a weak husband, a treacherous aristocracy, economic unrest, language barriers, misogyny and a national identity crisis after the victories of Joan of Arc, Marguerite was ultimately turned into the scapegoat for an unhappy and bloody time in English history.
Posted by Gareth Russell at 17:59