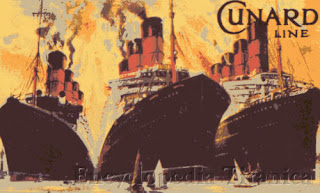 At the dawn of the twentieth century, Great Britain was not accustomed to the sensation of inferiority. America, although large and rich, was still viewed as a parvenu republic whose influence was confined to a continent that none of the other great powers were interested in; Imperial Russia had an empire that was second in size to Britain's, an economy drastically smaller and a political system which, to the British, bordered on the barbaric and arcane. France, Britain's theoretical ally and rival, was prone to revolution - as changes of regime in 1804, 1814, 1815, 1830, 1848, 1852 and 1870 had shown. The only country that Britain could not dismiss was Imperial Germany - newly unified and hungry for the glory that Britain enjoyed. The two countries competed in everything - army, navy, diplomacy, economy, art, industry and colonialism. The rapid expansion of the German navy under Admiral von Tirpitz gave Britain cause for alarm; the expansion of her commercial passenger fleet simply caused patriotic pique. Britannia was supposed to rule the waves in all its guises - be it military and commercial - and this newfound teutonic one-up-manship quite simply would not do.

The arrival of four lavish luxury liners, all named after members of the German imperial family, caused distress in London and Liverpool. The British Empire no longer had the largest passenger ships in the world. Then when another German company launched the Deutschland in 1900, which took the Blue Riband award for the fastest westbound crossing of the North Atlantic, it was clear that something had to be done. The British government were prepared to offer generous financial assistance to the Cunard Line to enable them to build a duo that would resoundingly crush the humiliation posed by the German liners, in terms of both size and speed. The only contractual stipulation was that if Britain ever needed the ships to perform for the Royal Navy during war-time, then Cunard would have to oblige. No such offer was made to Cunard's British rivals, the White Star Line, who, by that stage, were simply far too heavily-financed by J.P. Morgan for the British government's liking.

Although today all Cunard ships are named after British queens, before 1936 they were all named after provinces of the ancient Roman empire. (Hence why they all ended with -ia, whilst the adverb-inspired White Star's ended with -ic.) The first sister was named Lusitania, after the ancient Roman province of Portugal, and she was built at the John Brown shipyards on the Clydebank in Scotland. Weighing in at 31,550 tons, she was launched by Lady Inverclyde. She sailed on her maiden voyage from Liverpool to New York in September 1907 and immediately recaptured the Blue Riband for Britain; wresting it from the Deutschland.

The second ship, Mauretania, was named after Roman northern Africa and she was built at Swan Hunter shipyards on the Tyne in north-eastern England. She was launched by Winston Churchill's aunt, Anne, Duchess of Roxburghe, Queen Victoria's former Mistress of the Robes. Entering service in November 1907, two months after her sister, the Mauretania was slightly larger and slightly faster. The 31,900-ton liner took the Blue Riband and held it, quite incredibly, for the next twenty-two years. 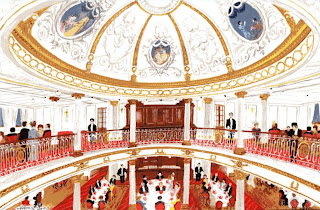 The press excitement surrounding the Lusitania and Mauretania was not just a result of patriotic sabre-rattling, but also because of a genuine sense of technological excitement. The two ships were not just larger than their German rivals, but a marvel of contemporary engineering because they were nearly twice the size of any ship then in existence. Their interiors, too, provoked much purple-hued commentary. Unlike the White Star Line, which preferred to decorate sister-ships (i.e. ones of roughly similar design, size and construction date) in almost identical styles, the 1907 Cunard sisters had individual aesthetics. To be reductive, the Lusitania was slightly more 'baroque' in her first class accommodation - particularly in her famous first class dining saloon (above) and the Mauretania was more conservatively English, with more use of mahogany, stained glass and a 'country house' feel in rooms like her first class lounge (below.) The Queens Grill on the current Cunard ship Queen Victoria is inspired by the first class lounges on-board the Mauretania. 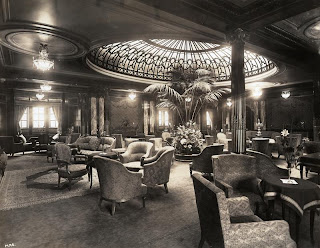 For four years, the two Cunard sisters were the last word in ocean-going luxury, size, speed and safety. In 1911, Cunard's British rivals, White Star Line, struck back with the 45,000-ton Olympic. Half-again as large as the Mauretania, the Olympic and her two sisters that were still being built in Belfast - Titanic and Britannic - were never designed to challenge the Cunarders in terms of speed. They would take a full extra night to make it across the Atlantic, but they would carry their passengers in more stable and spacious accommodation. There would also be three of them, not two, meaning that they would be able to offer more regular services than the Cunard Line's flagships. In response, Cunard commissioned a third ship to be built on the Tyne and opted to play White Star at their own game. She was not to be as fast as the two elder ships, but rather she was to be roughly the same size as White Star's Olympic and to offer comparably luxurious quarters.

Of course, by the time the new Aquitania was launched by the Countess of Derby in 1913, White Star's dream of a three-ship express run lay in tatters due to the Titanic disaster. All of the Cunard ships were revamped to carry more lifeboats since, like most of their contemporaries, they had been as unprepared as the Titanic had been. Named after the Roman province of western France, the Aquitania sailed on her maiden voyage in May 1914 and was dubbed "the ship beautiful," because of her palatial first class rooms. (Below) A month after she entered service, the Austrian archduke, Franz Ferdinand, was assassinated on a state visit to Sarajevo and Europe slid into the carnage of the First World War. 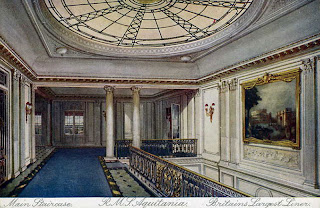 During the war, the Aquitania was gutted of her beautiful interiors and served first as a hospital ship and then as a troop transport for the Royal Navy. The Mauretania was a warship, a troop transport and a hospital ship; whilst the Lusitania was tragically sunk by a German U-Boat with the loss of over one thousand civilian lives in 1915. When the war ended in 1918, the two surviving sisters re-entered service for Cunard and the triumphant British government exacted the ultimate commercial humiliation on a vanquished Germany. The former pride of the German maritime fleet - the 52,000-ton Imperator, launched into service by Kaiser Wilhelm II in 1913 - was requisitioned and given to Cunard as reparations for the sinking of the Lusitania. She was kitted up in the Cunard colours (red and black funnels) and renamed Berengaria - which I like to think of as a bit of a transition name. It was the first Cunarder to be named after a queen of England (Richard I's wife in the twelfth century), but she still had the -ia ending.

Throughout the 1920s, Cunard ran a three ship service - now sailing from Southampton, rather than Liverpool. The Berengaria could be marketed as the company's impressive flagship (she wasn't the largest in the world; that honour went to White Star's Majestic); the Mauretania was still the world's fastest liner and the Aquitania represented a gracious alternative to the fast "jazz age"-style decoration of newer ships. It was a commercially successful operation, until the Great Crash of 1929 upended the world's economy. Passenger numbers plummeted and the three Cunard ships began to run at a financial loss for the first time in their history.

Inventive, if undignified, methods were used to try to make the vast ships turn a profit again. The Berengaria was sent on several "booze cruises" out of New York, to give alcohol-thirsty Americans a chance to escape Prohibition and drink themselves into a nautical stupor once the ship sailed outside American jurisdiction. The Mauretania was painted white (below) and tried to crack the cruise market. She was, however, too big and too old fashioned to cope well with exotic or hot ports of call. The Aquitania, which had been the most profitable of the three during the 1920s, went on short cruises to the Mediterranean. But these were piecemeal methods and the ships, particularly the Mauretania, were now simply too old to function properly for a company that could not afford to keep repairing ships that were unfashionable and consistently booked far below full capacity. 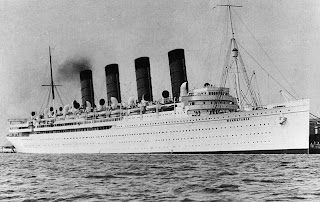 In 1934, Cunard and White Star bowed to economic reality and merged with one another to become the Cunard-White Star Line. Britain only needed one transatlantic luxury firm now, not two. This, of course, created the problem that they now had six liners available for the north Atlantic trade - the Majestic, Olympic, Homeric, Berengaria, Aquitania and Mauretania. Both White Star and Cunard had been making plans to build a new super-ship to modernise their companies' image and capture the new markets emerging as the Depression receded. They now wisely merged their finances and the new ship was named the Queen Mary in part because it avoided giving off the appearance of bias by picking either an -ia or -ic name. (Although as a sign of the way things were to go, her funnels were painted in the Cunard colours.)

The Mauretania was withdrawn from service shortly after the 1934 merger. Her furnishings were sold at auction in the following year and she was bought by a scrapping firm, after paying an emotive final trip to her "birthplace" at Newcastle-upon-Tyne. As a sign of how much affection she'd been held in during her career, even the U.S. president, Franklin D. Roosevelt, wrote a letter urging that she should be bought and preserved as a museum. The Berengaria, which helped maintain the transatlantic route whilst the Queen Mary was built, was retired in 1938 and met a similar fate. It was decided that the Aquitania should keep the new Queen Mary company until the new Queen Elizabeth was ready in 1940, which meant that when the Second World War broke out in 1939, the Aquitania was once again called-up to serve her country. Over the next six years, she transported nearly 400,000 soldiers for the Allied war effort. When the war ended in 1945, the former "ship beautiful" was used by Cunard to help the Canadian government in bringing "war brides" and their children over to Canada. By 1949, she had to be definitively retired as she was so old that she could not be brought in line with modern safety requirements. After a career that spanned nearly four decades, 1.2 million passengers, 3 million miles and two world wars, the Aquitania was sold for scrap metal in Scotland in 1950. 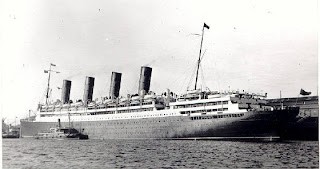