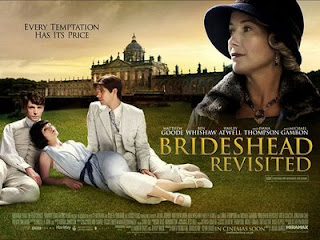 In 1981, Evelyn Waugh's novel Brideshead Revisited was turned into a lavish eleven-part television drama, with a combined playing-time of nearly thirteen hours. It is still generally agreed to be one of the greatest television series of all time. It not only captured the fantastic characters of Waugh's book, but also the atmosphere of the 1920s and 1930s, when most of the novel is set. In 2008, a new movie version of the  same novel came out starring Emma Thompson, Michael Gambon, Ben Whishaw, Matthew Goode and Hayley Atwell. Any movie of Brideshead Revisited was always going to struggle by being compared to the television show thirty years earlier. After all, the movie has to do in two hours what the television show got to do in thirteen. Inevitably, parts of the story suffer or are cut short.

For those unfamiliar with the story of Brideshead Revisited, it centres on a young upper middle-class student called Charles Ryder, who goes to study History at Oxford in the early 1920s. Initially, he befriends his cousin's circle of serious-minded friends and tries to devote himself to his studies like they do. However, he's already beginning to bore of this worthy but dull existence when he meets a strikingly handsome young aristocrat, Lord Sebastian Flyte. The pair (one is tempted to say "the couple") meet late one night when Sebastian, who has been out drinking heavily with his wealthy friends, vomits through Charles's open bedroom window and then sends him dozens of bouquets of flowers the next day to apologise. Charles is dazzled by the flamboyant, clever and eccentric Sebastian, who spends almost none of his time studying and most of it drinking, partying and organising picnics. (Needless to say, I'm a Sebastian fan.) Sebastian, who is repeatedly described as the most charming man anyone has ever met, is equally smitten with Charles and seems to regard their friendship as the only form of genuine affection he's ever known. One fateful day over the holidays, Sebastian invites Charles to visit him at home - which turns out to be a sprawling and magnificent country palace called Brideshead. There, Charles meets Sebastian's family, including his devoutly Catholic mother, Lady Marchmain, and his stunningly beautiful sister, Julia. From there, the slow disintegration of Charles and Sebastian's relationship - and Sebastian's sanity - dominates the rest of the novel. 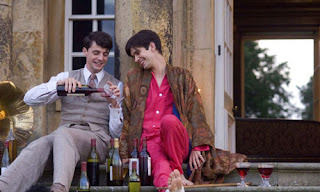 To begin with, what's right with the new version of Brideshead Revisited? Well, there are some very fine performances. Matthew Goode is very handsome, in the manner of a 1930s' pin-up, and he plays the lead role of Charles Ryder with a lot more angst and heart than the character was given in either the novel or the TV show. Hayley Atwell also manages to make her character, Julia, far more likable and she captures all of Julia's spoiled flirtatiousness perfectly. Michael Gambon and Emma Thompson as Sebastian's parents, the Marquess and Marchioness of Marchmain, are both very good and Ben Whishaw is, as ever, absolutely marvelous. On the one hand, his version of Sebastian is far more openly pathetic and a good deal less charming than the television drama's, but he also lights up the screen any time he's on it and helps give the movie a heartbreaking curve that it might otherwise have lacked. Greta Scacchi, Felicity Jones, Ed Stoppard and Joseph Beattie are also memorable in their performances as Cara, Cordelia, Bridey and Anthony Blanche (far less camp and much more astute in this adaptation.)

The movie is also undeniably beautiful, in nearly every shot. Oxford looks, as ever, nothing short of breathtaking. Brideshead was filmed at Castle Howard (below), the home of the Earl of Carlisle, just like it was in 1981 and the house has lost none of its power to dazzle the audience, in the same way it dazzles the character of Charles. Venice, Italian beaches, 1930s London and luxury transatlantic liners all combine to make this a costume drama lover's dream. Like Sofia Coppola's Marie Antoinette, Brideshead Revisited is simply stunning to look at from start to finish. 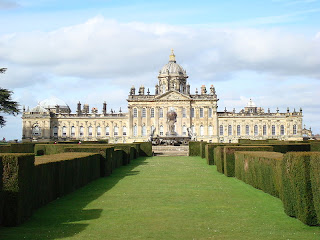 But, like Marie Antoinette, there's an absence at the core of Brideshead Revisited. You're not quite sure what you're supposed to feel or who you're supposed to sympathise with - with the obvious exception of Sebastian. Part of the problem comes from the time issue, which naturally means certain storylines have to get simplified. In the novel, it is strongly implied that very early on in their friendship, the relationship between Sebastian and Charles was sexual. It was certainly romantic, with Charles describing himself repeatedly as being "obsessed" with Sebastian and later saying that Sebastian was the "forerunner" for all the subsequent (female) loves of Charles's life. However, the novel was published in 1945 when censorship was still rampant and Waugh himself was a devout Catholic, who was unlikely to go into too much detail about it. It's therefore left up to the reader to decide just how far Sebastian and Charles went with each other during their summer term at Oxford - and there are no clear answers in the novel about whether one is straight or gay. Indeed, at one point, the sexuality of both Charles and Sebastian seems to be equally confusing or confused. The issue is left unresolved, because Sebastian's alcoholism and nervous breakdown severs the boys' relationship and Charles, of course, eventually ends up in a messy love triangle with two women. In a nutshell, we don't quite know what happened between Sebastian and Charles, physically, but they're clearly supposed to be in love with one another in the book. With thirteen hours of screen time, the 1981 television show was able to play with this idea brilliantly and the television show is as ambiguous and teasing as the novel was. Shots of them sunbathing naked together on the roof of Brideshead, snuggling together in a gondola, being congratulated on their love by Sebastian's father's mistress, chatting while Sebastian bathes and strolling arm in arm through the Botanical Gardens in Oxford litter the television series, but not once are they shown actually kissing. Like the novel, the jury is still out in the television show. It's the original (and benign) form of "don't ask, don't tell."

The 2008 movie, however, doesn't have the time to do this and it was apparently felt that modern viewers wouldn't appreciate the subtleties. The ambiguity of both characters' sexuality is therefore stripped down to an easy-to-digest label - in the movie, Charles is straight and Sebastian is gay. And indeed, it's his inability to reconcile his homosexuality with his mother's fervent Catholic faith that eventually pushes Sebastian into the downward spiral that practically kills him in the end. Charles is obsessed with Sebastian, yes, but apart from one rather chaste kiss between the two of them after a night of heavy drinking, there's no indication that Charles genuinely believed himself to be in love with Sebastian, too. 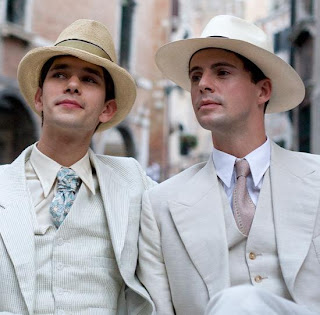 Portraying the two leads as being on opposite sides of the sexuality fence could actually work if it was done right, but all it did here was to make Charles's actions even more selfish and socially-ambitious than they are in the novel. (Which is saying something.) Charles Ryder's one redemptive feature, in my eyes, was that he had the capacity to love. In the movie, it now seems as if he goes along with Sebastian's infatuation with him, simply because he likes Sebastian's company and his big, big house.

The reduction of the novel's portrayal of sexuality is also mirrored in how the movie chooses to portray its other great theme - spirituality. Whilst the novel and the television show both stuck to Waugh's pro-Catholic view of things, even though he could acknowledge its flaws, the film plumps for making Christianity the villain of the piece. And, in particular, Sebastian's mother - Lady Teresa Marchmain, played by Emma Thompson. Whilst Thompson's sweet voice sings the Salve Regina during evening prayers with her children, her all-consuming obsession with her Catholic faith crushes down on her family's life and, eventually, destroys at least three of them. With Sebastian's sexuality much more of an open issue in the movie, it's strongly implied that Lady Marchmain knows all about it and that she's doing everything in her power to force her psychologically-fragile son to "choose" an alternative lifestyle. Over dinner, she only seems to warm to Charles once she realises that he isn't friends with Anthony Blanche - the story's only "out and proud" gay man, whom Lady Marchmain evidently blames for having "manipulated" Sebastian into thinking he's gay. As she pushes and prods Sebastian to change his ways and places spies around him at Oxford, she ironically drives him further and further into the arms of the alcoholism she's trying to save him from. Thompson's performance is, I think, magnificent. And she clearly loves playing this ill-informed matriarch, who wreaks misfortune whilst firmly believing that she's doing good. The problem is that by turning Lady Marchmain and, by extension, Catholicism (or her version of it) into the baddie of Brideshead, the film strips away all of the story's ambiguities and complexities. With Lady Marchmain standing centre-stage as the fount of all that's wrong with her children's lives, and later Charles's too, we as an audience lose a lot of the other brilliant bits of Brideshead Revisited: Charles's social climbing, Julia's staggering self-obsession, Sebastian's weakness, Bridey's prudishness and Lord Marchmain's pleasure-loving selfishness. All of the other characters seem to become less interesting and less important, because of the story's insistence that it's Lady Marchmain who's to blame.

There are a few other tiny problems with Brideshead, namely that it doesn't quite seem to capture the accents and mannerisms of the era in the way the 1981 television show did. Trying to pull it out of the shadow of the TV show is also next to impossible and comparisons are inevitably made throughout, if you've seen it. Whilst the TV show will probably still enjoy cult status long after the film, there's still quite a bit to praise in the more modern adaptation. Brideshead Revisited is enjoyable, lovely to look at and it has some very fine performances. (Trailer below.)