Marie-Astrid: the Queen who never was 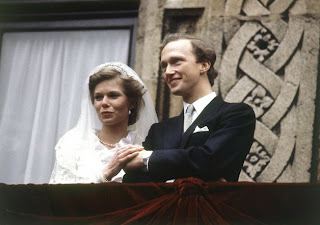 The 1981 marriage of Charles, Prince of Wales to Lady Diana Spencer was one of the most famous media events of the century. The splendour of the day and the drama of the marriage's breakdown in the next decade helped remove memories of the fact that for most of the 1970s, Prince Charles's position as the world's most eligible bachelor had helped occupy the tabloids.

Before the lithesome loveliness of Diana lit up the nation's screens, Prince Charles was linked to a whole host of women. Some eligible; many decidedly not. Certain members of the Royal Family looked on in horror at the pretty, wealthy but racy young women Charles was involved with in the decade before he met Diana. None of them seemed quite right to take on the enormous responsibility of being the next Princess of Wales. They either weren't virgins, weren't aristocrats or there was some defect in their personality that made royal insiders doubt they would adjust well to the "glamour in aspic" of marrying into the royal house.

One woman that Charles was linked to for a time was, on paper, perfect in all respects bar one. She was Princess Marie-Astrid of Luxembourg; she was the eldest child of Luxembourg's reigning Grand Duke Jean and his elegant Belgian wife, Josephine-Charlotte. She had trained as a nurse, despite her royal upbringing, and now served as President of the Red Cross in Luxembourg - the kind of humanitarian charity work that the British Royal Family love. She was five years younger than Prince Charles, pretty, poised and having been born into royalty herself, she knew what to expect. By 1977, British tabloids like the Daily Express were confidently reporting that Buckingham Palace would soon be announcing the Prince's engagement to the twenty-three year-old Princess of Luxembourg.

The only problem, of course, was her religion. Like all members of Luxembourg's reigning family, Marie-Astrid was a Roman Catholic. One of her father's godparents had been Pope Benedict XV and the family retained close ties with the Vatican. For years, it was assumed that it had been Pope Paul VI who ruined Marie-Astrid's chances of becoming Queen of England by invoking the Ne Temere decree, which required that, as a Catholic, she should be married in a Catholic church and promise to raise her children as Catholics, too. Given that Marie-Astrid was going to marry the future head of the Protestant Church of England, that naturally created some problems and the whole thing had to be called off.

In fact, whilst it's unlikely that the Pope would have been too enthused about seeing Marie-Astrid's children raised as Protestants, it was Britain that torpedoed the match. Not Rome.

In the first place, there were laws in place that made such a marriage impossible. If Charles and Marie-Astrid had married, it would have been the first time a British sovereign legally married a Roman Catholic since the future James II married Maria-Beatrice of Modena in 1673. Their reign had ended in revolution and when their enemies triumphed at the Battle of the Boyne, laws were introduced banning any future monarchs from marrying a Catholic. When the future George IV attempted to marry a gentle Catholic widow, Maria Fitzherbert, in 1785, he broke nearly every constitutional law applicable to his private life. The marriage was regarded as totally illegal and George was eventually forced to marry the far less appealing Princess Caroline of Brunswick - who may have been smelly and annoying, but at least she was Protestant and that was really all the British government cared about.

That the government considered it possible that Prince Charles might one day want to marry Princess Marie-Astrid is shown by the fact that there were several committees set-up to see if it was constitutionally possible to repeal the ban on British royals marrying Catholics. There was soft opposition, from the beginning, including from Charles's beloved grandmother, Queen Elizabeth the Queen Mother, who was not only a devout Protestant but was also naturally opposed to change. Concerns about how such a marriage would affect the already-volatile situation in Northern Ireland were also voiced. Early in 1980, the Prime Minister, Margaret Thatcher, set up a small committee to discuss the issue. According to her future biographer, Hugo Young, the Prime Minister herself was strongly opposed to changing the law or to encouraging the Prince's marriage to Marie-Astrid. And her objections rested squarely on the idea that the princess's religion was problematic and undesirable. Some of the committees other members later told Young that they had been shocked by "the extreme anti-Catholicism" of the Prime Minister.

Eventually the rumours about Charles and Marie-Astrid faded away. Maybe that's all they ever were. Neither Charles, nor Marie-Astrid, ever went firmly on the record about how much truth there had been in the idea that they could quite married. Evidently, Mrs. Thatcher considered it a possibility, but we don't know how sold on the idea Charles himself ever was. Charles soon announced his forthcoming marriage to the beautiful Diana Spencer - young, virginal, British, aristocrat and Protestant. And Marie-Astrid married a member of the deposed Austrian royal family, Archduke Carl-Christian, in 1982 (above.)

Prince Charles is now the father of two sons and is married to Camilla, Duchess of Cornwall - one of the women who was considered so unsuitable for him in the 1970s. Marie-Astrid, now an Archduchess of Austria and Princess of Hungary, is the mother of five children. Her eldest, Marie-Christine, is married to the Count of Limburg-Stirum, and is a mother herself. Her eldest son, the twenty-six year-old Archduke Imre, is engaged to the American Catholic journalist and pro-Life activist, Kathleen Walker; his 24 year-old brother, Archduke Christoph, is engaged to the French diplomat's daughter, Adelaide Drapé-Frisch. (Both engagement pictures are below.) Marie-Astrid's two youngest children are 21 year-old Archduke Alexander and 18 year-old Archduchess Gabriella.

How history might have been different if the rumours were right and the Prime Minister had supported the idea. Perhaps though, given Marie-Astrid's own devotion to her Catholic faith and the quiet lifestyle she now enjoys, things worked out for the best. 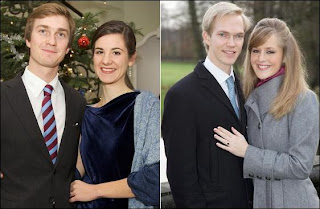