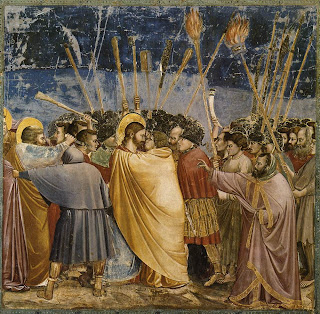 “Judas then, having received a band of men and officers from the chief priests and Pharisees, cometh thither with lanterns and torches and weapons.”
- The Gospel according to Saint John, Chapter 18

"No, it makes perfect sense. Unfortunately. But I imagine that it will only make complete sense to you in the end. When that moment comes, Judas, remember my words: we were both chosen, but we were not helpless. It was not pre-destined. At any moment, we could have rejected the mission God gave us, but neither of us did. That is because God, in His infinite wisdom, knew that we were both entirely suited to the tasks He would assign to us. Remember, if your presentiment is correct, that you were the most suitable candidate for whatever task you shall eventually perform. You may not know why exactly; you will simply know that you were the right choice. For you, even more so than it was for me, I imagine it will be an overwhelming burden."
- The Virgin Mary, Act II, Scene VI, Magdalene by Gareth Russell

The fourth day of Holy Week is sometimes known as "Spy Wednesday," because it commemorates the day on which Judas Iscariot betrayed Christ to the Sanhedrin, agreeing to facilitate His arrest on the following day, in return for the princely sum of thirty pieces of silver.

Judas, as a character, is one I have grappled with, with unintentional degrees of success, apparently. In 2006, when The Da Vinci Code mania was at its height, the historical elitist in me took such umbrage at its presentation of early Church history that I began to research the life of Saint Mary Magdalene, with the thought to do a play based on her life, as it is recorded in the Bible and the Apocrypha.

The result, Magdalene, was set in a generic "modern" setting and followed Mary's life from her time as a victim of demonic possession to the Passion of Holy Week. Apart from the main characters of Mary, Jesus and the Virgin Mary, the supporting characters included three of the Apostles (Saint Peter, Saint John the Evangelist and Judas Iscariot) and three of Christ's female followers (Saint Johanna, Saint Veronica of the Veil and Christ's aunt, Mary, the wife of Cleopas, whose name was changed to 'Maria' in the play to avoid confusion with the other two Marys.) Christ's adoptive father, Saint Joseph, also featured briefly in two scenes early in the first act.

In fairness, some apparently found the play irksome - a few objected to the presentation of the Virgin Mary, Maria Cleopas and Johanna as aristocrats, although I was simply following the ancestry given to her by 1st century Jewish evangelists and, in Johanna's case, the Bible describes her as the wife of a palace aristocrat. Others thought that it was pushing female priesthood or that, paradoxically, it was "too Catholic," that it was promoting the idea of the Virgin Mary as a mediatrix, that it rinsed the idea of Justification By Faith or that it was too pro-Christian in general. Others were more kind and I was delighted with the very kind letter of recommendation Rev. Dr. Andrew Moore of Oxford's Faculty of Theology wrote for the second run of Magdalene in 2007.

As I have said, Magdalene has so far been performed twice - once in Oxford in December 2006 and again in Northern Ireland in September 2007. Recently, when I was discussing some of my work, a friend (who has seen every play I have written since All Those Who Suffered in 2004) declared that he thought Judas was the best character I had ever written. I was somewhat taken aback - flattered, certainly, but also surprised - because during the writing of Magdalene, I had spent far less time crafting Judas than I had some of the other characters and, moreover, Judas only speaks at length in three scenes during the entire play. When I put this to another friend, they also concurred that Judas was the best-written, alongside Gabrielle de Polignac in The Audacity of Ideas.

With Spy Wednesday coming up and my friends' fairly surprising comments that they thought Judas was one of the most powerful characters I had ever written - again, flattering but not something I myself would ever have considered - I went back to look at my Author's Note for Magdalene and also to the two performances of Judas Iscariot: -

"The final apostolic figure of Judas Iscariot could have been characterised in many ways, since he has been vilified, justified or excused countless times since his suicide. A rich Christian sub-culture has long since exonerated Judas of his act of treachery on Spy Wednesday on the grounds that somebody had to betray Christ in order to bring about His eventual victory over Death and so, even though Judas eventually killed himself over what he had done, he does not deserve our censure because he did what was needed. There is some truth in this, but not much. I tend to agree with the philosophy of Saint Thomas Aquinas, who argued that there was a fundamental difference between foreknowledge and pre-destination and that the omnipotence of the Divine is not sufficient grounds for eliminating the philosophical force of Free Will. This rather complex debate is (I hope) appropriately dealt with in an exchange between Judas and the Virgin Mary in Act II, Scene VI. Although I disagree with most of Judas's apologists, I hope I have not made him into a monster; clearly, he felt deep remorse over what he had done and, at one point, he had been a trusted member of the Apostolic community. I hope, as a playwright, that I have constructed a believable set of psychological circumstances have been constructed to give a dramatic reason for why he did what he did. The authors of the Gospels, like me, found it difficult to explain Judas's actions and so each had to put down their own guess as to why he did it - Saint Matthew condemned him but focused instead on Christ's prediction of it, Saint Mark apparently pitied him, whilst both Saint Luke and Saint John were so horrified over what Judas had done that they could only conclude that he too had been possessed by the Devil... The major modernisation of Judas's character is my suggestion that he was a political character and this, I must admit, is based on fairly flimsy historical evidence and is used primarily to make Judas seem more relevant in the play's new context. Judas's name is sometimes given as "Yehuddah Isqeriyyot" and it may have some connection with the Sicari, a fundamentalist faction of Zionism in the 1st Century AD. This link raised the (faint) possibility of a political conscience ... and so I thus reached the decision to present Judas as a crypto-socialist, or a powerful but misguided idealist, in the hope that for the play it might shed light on why he did what he did on that awful day."

In both productions of Magdalene, I was very lucky as both a writer and a director to have Judas played by two excellent actors, both of whom offered very different portrayals of him and it is a testament to them, that Judas, who really has only two major scenes to himself, made such an impact on the audiences.

Brian McMahon, who played Judas in the Oxford production of Magdalene, played Judas as a profoundly cerebral character - a brilliant but damaged intellectual, struggling to adapt to a world that had failed utterly to live up to his expectations of it. Jamie Kirk, who played Judas in the Northern Irish production, offered a contrary Judas - one who had failed to live up to his own expectations. Jamie's Judas was a far less self-consciously intelligent character, but more passionate, more angry and far more damaged. The result of the two different characterisations of him showed through in the two main scenes Judas has in Magdalene.

The first scene - Act II, Scene VI - takes place on the evening of Spy Wednesday. Having been offered hospitality in the house of Saint Johanna, Judas returns on a stormy night from his meeting with the Sanhedrin, where he comes across the Virgin Mary in the drawing room. It is a stormy night and the Virgin seems even more removed, more cryptic than usual. Judas, already burdened with guilt over what He has done to her Son and frustrated with her perpetual air of mystery, begins to interrogate her. She, in response, gives evasive answers, before finally responding in depth, when Judas complains that he feels himself a victim of fate and powerless about his own destiny - a statement which apparently irritates her out of her usual graciousness. The second scene takes place after Jesus's arrest, when a furious Mary Magdalene - discovering what Judas has done - hunts him down and savagely berates him for his betrayal. Judas, by now suffering a nervous breakdown, begs her to help him, but she refuses. (Another scene which caused unexpected controversy, since it apparently implied that Mary Magdalene had psychologically nudged Judas further along the road to suicide.)

In the Oxford version, with Brian as Judas and Cathy Thomas as the Virgin, the Spy Wednesday scene became one of the play's darkest and most threatening moments. Looming over the fragile figure of the Virgin, Brian/Judas - the angry, frustrated intellectual - was a superbly bullying figure, venting his own frustrations on a woman who symbolised to him everything that was wrong with a movement he had once so passionately believed in. In the Ulster production, where Stacie Novotny played Our Lady, the scene took on a more tragic hue, with the rain-soaked, tortured Judas practically hounding her across the stage for some form of absolution.

In the confrontation scene between Mary Magdalene and Judas, Chloe Masterton's Mary and Brian's Judas played a scene of intense viciousness. Mary, gripped with an almost-maniacal sense of rage, bullied and harangued a pathetic Judas, who grabbed onto her as she shrieked at his treachery. Judas was, at that moment, utterly contemptible and at some points in rehearsals, I remember feeling almost embarrassed at watching someone having fallen apart so completely. In the latter production, since Jamie's Judas had always been played so close to the surface, it wasn't so much contemptible as just profoundly heartbreaking - Judas, having finally cracked as he had promised to do for the entire play, was now a husk of a human being, whilst a devastated Mary Magdalene (Emily-Rose Conlon) looked on in utter confusion and grief at what he had done.

The two versions of Judas I had the privilege to watch and direct both offered very different characterisations of one of Christianity and literature's most controversial figures and in the end, I have no idea which one was closer to the truth. As I was discussing this with one of my friends, I remarked that I supposed the reason why she had picked out Judas, the ultimate failed idealist, and Gabrielle, the glacial society beauty, as my two strongest characters, was because they were two people who you don't expect to feel anything for in their hour of need, but - hopefully - as an audience, in the end, you just can't help but pity them.

"No," she said after a moment's thought, "I don't think that's it. I mean, you don't really feel anything for Gabrielle, because she's so perfect, even when she's dying. You just want to look at her. But Judas... I don't know... I suppose half of you wants to hug him and the other half wants to hit him. You'd be too afraid to do either of those to Gabrielle."
Posted by Gareth Russell at 23:56