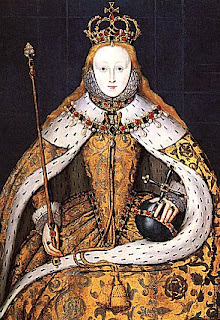 Mary Tudor's five-year reign came to an end at about seven o'clock in the morning of 17th November, 1558. The Queen was forty-two years-old and she had just finished hearing morning Mass. She had been bedridden for some time and, after Mass, the Queen had slipped into what, at first, seemed like a sleep. Her devoted ladies-in-waiting did not initially realise that Queen Mary had died. Twelve hours later, her friend and cousin, Cardinal Reginald Pole, the last Catholic Archbishop of Canterbury, passed away, as well. The queen and the archbishop's deaths removed the two great champions of English Catholicism in the space of a single day and this paved the way for Mary's Protestant sister, Elizabeth (above), to mount the throne and install her mother's former chaplain, Matthew Parker, as Pole's successor. Together, the new queen and Parker would try to find a via media, or compromise, to the thorny question of England's national religion, which Mary had died believing was a non-negotiable.

Elizabeth Tudor heard the news that she was now ruler over England, Wales and Ireland at her countryside palace of Hatfield. It had been hers since childhood and over the last few weeks, courtiers had begun migrating towards it, eager to prove their allegiance to the new queen, even as the old one lay dying at Saint James's. Elizabeth needed their support, but she was privately disgusted by their fecklessness. The Spanish ambassador, Count de Feria, who also visited her, was alarmed at the princess's confidence and her refusal to acknowledge that she owed any of her future success to her brother-in-law, King Philip II. Instead, she rather tartly informed de Feria that she would rule because of God's will and the people's love for her, not because of Spain's support. "She is much attached to the people," de Feria wrote, "and she is very confident that they are all on her side; which is indeed true." The councillors who arrived at Hatfield on the afternoon of the 17th found their new monarch underneath an oak tree; as they pressed Mary's coronation ring into her hands, confirming that Mary was dead and Elizabeth had succeeded, Elizabeth is supposed to have quoted the Bible in Latin, saying "This is the Lord's doing, and it is marvellous in our eyes." Later, as she called her first council meeting, she did manage to find some kind words to say about her late sister, before swiftly moving on to fire most of Mary's advisers. The new dominant power on the council would be Elizabeth's old friend and ally, Sir William Cecil, a convinced Protestant whom Elizabeth nicknamed "My Spirit," because she trusted his advice so implicitly. Meanwhile, back in London, the body of the old queen was prepared for its lying in state.

Elizabeth's ambivalent attitude to her predecessor was hardly surprising. The two sisters were separated by an age gap of seventeen years and Elizabeth's mother and Mary had been enemies back in the 1530s. Although there had been a point when Henry VIII's two daughters were apparently quite affectionate to one another, this sisterly solidarity had evaporated once Mary became queen in 1553. An early rebellion against her rule in 1554 had made Mary suspect that Elizabeth was in league with the rebels and the princess had spent some time in the Tower as a result, vehemently protesting her innocence. Elizabeth had then gone along with a shambolic fake conversion to Catholicism, during which time she often pretended to faint or groan while attending Mass - an attitude not designed to endear her to the deeply devout Mary. For most of Mary's reign, Elizabeth had either been under house arrest or in disgrace. It was an humiliation which Elizabeth felt keenly and she was not alone in assuming that it was only her popularity with the people, and the lack of evidence, which prevented Mary from punishing Elizabeth in the same way she had their cousin, Lady Jane Grey.

Elizabeth's prevarication and dishonesty was matched by Mary's pettiness. The Queen sank to a new low by telling everyone that Elizabeth was not really Henry VIII's daughter, but actually the biological love-child of Mark Smeaton, a young musician who had been executed for allegedly committing adultery with Anne Boleyn back in 1536. Smeaton had been tortured and then executed for the crime and his confession was used to send Elizabeth's mother and four other men to their deaths, as well. It was a ludicrous accusation, but mud, however unjustly flung, usually sticks. As queen, Mary proclaimed that she could actually see a resemblance between Elizabeth and Smeaton. Some historians have taken her claim seriously, but it's worth remembering that Mary Tudor could never actually have met Mark Smeaton. Smeaton only came to court in the late 1520s, by which time Mary was no longer resident there, and he began his service in the household of Cardinal Wolsey - not the king's. By the time Smeaton was in regular attendance on the royal family, Mary had been banished from court and by the time she came back, in late 1536, Smeaton was dead. Even if she had seen him, it can only have been at a distance and as one of the dozens of musicians who lived at Henry VIII's court. The Queen's suggestion that she could see a clear resemblance between her younger sister and Smeaton was therefore nothing more than a vindictive and vicious lie.

Elizabeth I's accession was one of those moments in English history - along with Canute trying to turn back the tide and Charles II hiding in an oak tree from Cromwell's soldiers - that historical illustrators came to love. It was an arresting image of a young and intellectually brilliant princess, freeing her subjects from the religious oppression of her maniac-sister. It was not quite that simple, of course, and although Mary I was not generally popular at the time of her death, there were many who had regarded her burning to death of three hundred Protestants with something akin to indifference, if not downright approval. Elizabeth I thus inherited a country fraught with sectarian tension, a foreign policy that was in a shambles, a less-than-stable economy and a divided nobility. Both she and de Feria were right, though, when they stated that despite the difficulties, the new Queen came to the throne on a wave of popularity. Despite increasing hostility from the palace-bound aristocracy in her later years, Elizabeth, with her flare for drama and public relations, was by and large to keep that love throughout her forty-five year reign.
Posted by Gareth Russell at 13:19