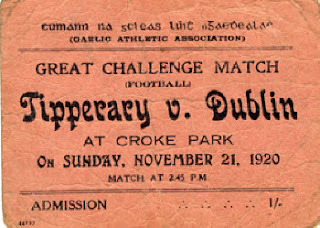 Today is the anniversary of the so-called "Bloody Sunday" of 1920. It was a gruesome day in the middle of the Irish War of Independence, or the Anglo-Irish War, depending on one's terminology, in which thirty-one people lost their lives in a cycle of increasingly-unhinged violence. It was neither the first time, nor the last time, that such a thing would occur.

Since the end of the First World War, just over two years earlier, Ireland had slid inexorably into violence. Like most of Ireland's historical violence, it was presented as a conflict between two rival nations - Ireland and Britain - when, in fact, it bore all the hallmarks of a civil war. The failure of the republican Easter Rising of 1916 and the British administration's lethally incompetent, and cruel, repression of it had radicalised Irish nationalism and pushed many into the arms of the republican paramilitary movements. In the northern province of Ulster, Protestant hysteria at the proposed implementation of Home Rule for Ireland had led to widespread sectarian violence, particularly in rural areas, and there was little doubt in the British government's mind that any attempt to force the northern-most six counties to participate in any form of all-island independence would result in unparalleled civil unrest - if not a bloodbath.

In the south, the who's who and the what's left of the Irish aristocracy, known as the Ascendancy, were quietly preparing themselves for the liquidation of their way of life and the whole island suffered through attacks and counter-attacks. In Dublin, the British-born and Ascendancy-related Lord Lieutenant of Ireland, Lord French, was struggling to hold on to power through increasingly desperate measures, all the while being undermined by the hunger strike-suicides of republican prisoners, republican-led spy-rings inside Dublin Castle, various attempts on his life and assassinations of numerous politicians, military service personnel and policemen. The main party of Irish republicanism, Sinn Féin, had been outlawed; many of its leaders were in jail. In retaliation, republicanism's military wings, like the IRA and the Volunteers, had carried out numerous night-time attacks. In Sligo, Mayo and Clare, the homes of the local aristocracy were torched to the ground, leading some of the Ascendancy to characterise the republican movement as the second coming of the French Revolution. The Volunteers' newspaper, An t Óglach, had declared that its supporters should used "all legitimate methods of warfare against the soldiers and policemen of the English usurper" and "slay them if necessary". The behaviour of a supplementary force of British ex-soliders, known as the Auxiliaries or "the Black and Tans," because of the colour of their uniforms, was borderline psychotic and capriciously cruel. Earlier in the year, they had burned the entire southern city of Cork to the ground, reminding many Irish nationalists of the dark legends of Oliver Cromwell and the inherent cruelty of the British.

It was in this environment of death, civil war, repression and reprisal, that Bloody Sunday took place.

Early in the morning of Sunday, 21st November, 1920, Michael Collins ordered the murder of eleven British agents. He had discovered their identities and whereabouts thanks to the spies he had placed in Dublin Castle - Eamon Broy, James Kavanagh, Patrick MacNamara and David Neligan. Collins, who was to be murdered himself two years later for trying to end Ireland's conflicts, is often seen as a kind of secular saint, particularly after the 1996 movie starring Liam Neeson lionised his contribution to Irish history. Like most revolutionaries, Collins was blinkered, intolerant and ruthless; however, he also had unique qualities of charisma, charm, intelligence and a genuine commitment to a happier future for Ireland. He was the brains behind a group known as "The Squad," who had carried out many of the recent attacks on Irish unionists and British personnel in Ireland.

On the morning of the 21st, while many Dubliners made their way to church, members of the Squad barged into hotel rooms and private homes across the city, where they shot their victims at point-blank range. For many, even nationalists, their actions bore far too many similarities to the behaviour of the Bolsheviks, who had recently seized power in Russia and who had so far shown themselves far more inclined to shoot first and ask later. If at all. Two other British troops, who tried to save some of the victims, many of whom were in bed at the time they were killed, were also gunned down. The vast majority of Dubliners reacted with disgust at what the Squad had done. In contrast, many republicans simply regarded it as a military manoeuvre which was unfortunate, in that it was necessary.

This nausea, however, was soon cancelled out by the actions of the opposing side. The news of the thirteen deaths in the morning tripped the wire of unionist paranoia. The Black and Tans, as ever, sensed the opportunity for blood and were crying out for vengeance. Cadets training for the Irish national police service, the Royal Irish Constabulary, were stupidly allowed off their training base in Dublin's Phoenix Park and they swarmed into the city, fired-up with patriotic blood-lust. Two leaders of the Dublin branches of the IRA, Dick McKee and Peadar Clancy, were executed in Dublin Castle in retaliation for the morning's deaths.

The frightening chain of happenstance and coincidence, which makes history and our lives at once both so fascinating and appalling, led all of these events to collide at Croke Park, a large sports stadium in Dublin, where the Gaelic Athletic Association (GAA) were playing a match between Tipperary and Dublin. Gaelic football, a uniquely Irish sport, had rediscovered its popularity during the Gaelic Revival of the mid-nineteenth century, which was also how the GAA itself had come to be created. The matches, then as now, typically drew very large crowds and, then as now, the GAA's supporters were overwhelmingly Catholic and nationalist in composition.

The Auxiliaries, backed by the excitable RIC cadets, swept in to the stadium and claimed they were going to search for arms. After what had happened that morning, they claimed they couldn't be too careful. As the historian Russell Rees has pointed out, it's a statistical impossibility that at least some of the crowd at Croke Park were not armed. However, it's equally unlikely that they were going to cause any damage or disturbance at a GAA football match. Furthermore, if the Auxiliaries' genuine intention was to root out illegally-owned firearms, there was scarcely a less efficient venue to try and do that than at a packed-out sports ground. The police and the soldiers later claimed that once their perfectly reasonable request had been made, the guilty suspects tried to run away and the crowd tried to shield them.

In reality, it seems far more likely that any movement in the crowd looked like the incipient beginnings of a riot to the Auxiliaries. Without warning and in direct contravention of most laws then in place in both Britain and Ireland, they began firing into the crowd. As the bullets smacked into the screaming crowd, who had been out to enjoy a day of football with their friends and family, a new dimension in Irish political crime was created. By the end of the slaughter, sixty people were seriously injured; twelve more were dead.

In some ways, it would be easy for the revisionist historian to write Bloody Sunday off as being famous for nothing more than sentimental exaggeration. 1920 was the so-called "year of terror" in Ireland; there were many, many days of unwarranted butchery and incompetent cruelty. There were many days in which Irish unionists or British agents were murdered in their beds; there were many days on which the actions of the British Black and Tans achieved a level of cruelty that would make Genghis Khan blush. You could argue that Bloody Sunday only became famous in retrospect because unionists were able to justify what had happened by pointing out that the IRA and the Squad had started it, by trampling on all the rules of Christian chivalry and fair combat by murdering their unarmed victims as they slept. And because republicans could spin the attack on the crowd at Croke Park as the totally-unprovoked actions of an oppressive imperialist tyranny. Looked at from this perspective, Bloody Sunday is significant in Irish history only because of its propaganda value to both sides; not because of its actual chronology.

And yet, even among all the horrors of 1920, there is something about Bloody Sunday that justifies its place in the canon of Irish tragedies. The day began with the deaths of thirteen men who were politically active; they were knowingly and willingly participating in an armed struggle to prevent Irish independence. However, they were murdered like cattle - not like enemies of war. There was no glory, nor dignity, nor even bravery, in how those men were killed on the morning of 21st November 1920. There was even less in how the crowd at Croke Park was treated. They were turned into nothing more than target practice for sectarian police cadets and an Auxiliary force that it would be charitable to describe as mentally-unstable. Bloody Sunday is Ireland's twentieth century tragedy in microcosm. Like most of Irish history, both sides have trussed it up in their own propaganda - nationalism's romanticism and unionism's equally-habitual cold rationalisation. Bloody Sunday is in fact more interesting, and more horrible, than its legend suggests. In the space of a single day, Ireland's hideous history of tit-for-tat was on full display. To this day, many unionists refuse to concede that the massacre at Croke Park was wrong, because of what had happened earlier on in the day to the British agents. Others refuse to acknowledge that when people are killed in an inhuman way, we all lose the collective cultural ability to see each other - regardless of faith or creed - as human.

The tragedy of Bloody Sunday lies far more with the victims in Croke Park than it does with those murdered on Michael Collins' orders earlier in the day. Those men's deaths were conducted with grubby dishonesty and subterfuge; more like a mafia attack than anything else. Yet, those who were slaughtered at Croke Park were not active participants in an armed struggle. They were innocent people, seeking to enjoy a day out; they are representative of all of us. Whether one cheers for rugby, Gaelic football, or both, whether one's allegiances are to the GAA or the IRFU, whether one is unionist, nationalist, republican or bored by the whole thing, those people who were shot to death in the crowd at Croke Park in 1920 represent all the millions of ghosts in Irish history who wanted to live and love in this island - and to be left in peace from the political storm. They represent everyone whose life was caught up in the tidal wave of our historical unrest. They represent everyone in Ireland who were given no choice about whether they died and no choice about the political cause that took their lives.

Bloody Sunday was not a wake-up call. Nothing changed in Ireland after it happened; it simply intensified an already-dire situation. The ghosts of the thirteen fans who died in Croke Park on that day did not rest quietly.
Posted by Gareth Russell at 01:13