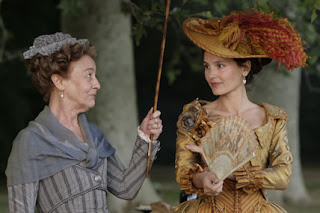 The stunning movie Les adieux à la reine, or Farewell, My Queen, in English, has caused quite the stir because it allegedly depicts Marie-Antoinette (Diane Kruger) as being a lesbian or bisexual, who was in love with her gorgeous best friend, the Duchesse de Polignac (above right, played by Virginie Ledoyen.) Told from the point of view of a palace servant in the days immediately after the fall of the Bastille prison, the movie is based on the novel by acclaimed French historian, Professor Chantal Thomas.

In this interview, the movie's director, Benoît Jacquet, discusses the lesbian undercurrent in the movie and how the intense nature of aristocratic friendships in the eighteenth century may have led to confusion over the relationship between Gabrielle and the Queen. Personally, I think the movie's ambiguity is kept quite nicely - although I don't for a moment think there anything even remotely sexual in Marie-Antoinette's relationship with Gabrielle de Polignac. From what I can tell, Jacquet himself does actually believe that it's possible that Marie-Antoinette was a (repressed) lesbian or, at the very least, in love with Gabrielle; whereas the actress who played the Queen, Diane Kruger, does not and believes the story was one of intense, but platonic, love. Either way, Les adieux à la reine is a beautiful movie and Diane Kruger's performance is exceptional, as is her physical resemblance to Marie-Antoinette.