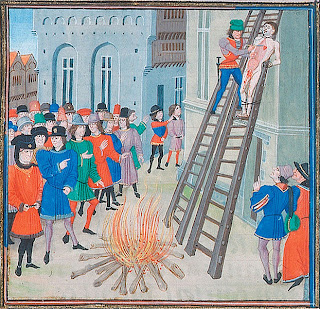 On the twenty-fourth day of November, 1326, a sharp, glistening, silver knife sliced into the flesh of an emaciated man called Hugh Despenser, who had spent the last two weeks on hunger strike in a dingy county jail in Oxford. This man had once been one of the mightiest lords of his generation, enjoying the special favor of England’s king, Edward II. No-one looking at that poor, starving, screaming wreck of a human being could possibly have doubted the old Biblical saying, ‘O, how the mighty are fallen.’

Hugh Despenser was stripped naked by the time the assault on his body began. He had to be. The law had sentenced him to be castrated before being hanged and cut into quarters. Like most executions in the Middle Ages, Despenser's death happened in public. Executions were like a kind of theatre for the local population. Like bullfighting or dog-fights, a living creature was trapped in the centre of the ring and the spectacle would only be over once that creature had died in the most hideous and traumatic way imaginable. Medieval parents would often bring their children along to watch these executions. It set a good example for the little ones, because it showed them what could happen to anyone who broke the law, disobeyed the King or angered the Church.

A terrible scream tore from Hugh Despenser’s ravaged throat, in the same moment as an almighty cheer erupted from the crowd. The dying man had not been a popular figure with the general population. There were rumors that his relationship with King Edward had been much closer than it seemed; too close, some said. Even if it hadn’t been, Lord Despenser had been too rich, too powerful and too arrogant. It was fun for the good people of Hereford town to see someone so pompous being brought back down to earth. As the awful, terrible ritual of the castration continued, the crowd kept chanting and jeering and singing.

One woman, however, did not cheer or clap or cry as Hugh Despenser’s life was ripped from him. She sat on a specially-constructed viewing gallery and watched the death of her enemy with hardly any sign of outward emotion. She was strikingly lovely to look at; even if her sumptuous gown and jewels hadn’t made her stand out from the crowd, her beauty would have. Her skin was as white and smooth as ivory, her hair was sun-kissed blonde and her body was tight, trim and slender, even after four pregnancies. Her name was Isabella of France, Queen of England and Lady of Ireland. They called her ‘the beauty of beauties.’ She was thirty-one years old and it was she who had orchestrated Hugh Despenser’s execution.

Royal wives in the Middle Ages were expected to be gracious, loving, well-bred, obedient, merciful and charitable. No woman had ever ruled England in her own right; the only queens in English history so far were those who held their titles because they had married a king. It was men who were supposed to lead the government, not women. It was the queen’s job to obey him and to have babies who could carry on the family’s rule into the next generation. Some queens obeyed the rules; some did not. Isabella was the twelfth queen of England since the Norman armies had conquered the country in 1066 and in that time, there had been some remarkable women who wore the crown. There had been queens who were so intelligent that their husbands could not make any major political decisions without them. There had been queens who had been able to beg or bully favours from popes and warriors. There had been queens whose ambition for their children knew no limits. One queen of England was so intensely religious that she drank the dirty bath water used by lepers, hoping to imitate the loving humility of Jesus Christ. There had been queens who had married for love, some for money and many for politics. There had been beautiful queens, ugly queens, happy queens and miserable queens. Despite the constraints placed upon them by their title and by royal protocol, each had managed to carve out a life and an identity for herself. None, however, had done it quite like Isabella. She had schemed, she had lied, she had raised an army and driven her husband off the throne, and now she was watching the public torturing to death of the man who many, including Isabella herself, believed had been her husband’s lover. Even if Hugh hadn’t been Isabella’s competition for Edward’s love, he had still been competition for his money, land and power. And in Isabella’s books that was just as upsetting. Maybe even more so.

Far from being the crying effeminate weakling imagined by movies like Braveheart, Edward II had been tall, muscular and physically vital. Whatever his sexual preferences had been, he had done his duty by fathering four children with his beautiful French queen. Earlier on in his reign, Edward's lover, Piers Gaveston, was horribly murdered by rebels and Edward had nurtured a cancerous hatred of his nobles since that day. Increasingly tyrannical, he had alienated many of the upper classes and played into Isabella's hands. By the time he replaced Gaveston with the equally greedy and unpopular Despenser, Isabella was ready to liaise with her brother, the King of France, and her own lover, Roger Mortimer, to create a rebellion that would finally topple Edward from his throne and hand de facto power to Isabella and Roger. With Edward falling, Hugh Despenser soon found himself robbed of royal protection and defenceless in the face of widespread hatred. Few tried to save him when Isabella's army caught up with him and hurled him into jail. Knowing Isabella as he did, it says a lot that Hugh Despenser tried to starve himself to death rather than submit to her and her executioners.

Hugh Despenser did not die an easy death. As he was hacked to pieces, Isabella hosted a small picnic in the viewing gallery for her friends and ladies-in-waiting. When, at long last, Hugh’s mutilated body lay dead, silently spewing blood into the cobblestones of Hereford marketplace, Isabella stood-up and left. At her command, the dead man’s head was taken back to and displayed on a pike on top of , as a symbol of the Queen’s power over her enemies. After two hundred and fifty years, an English queen had dared to seize power for herself. Her son, Edward, was only a boy and Isabella could hope to hold power until he reached adulthood. Slipping out of the gown she had watched Despenser’s execution in, Isabella changed into her dress for the evening, as the executioners cleared up the mess outside, made by the grizzly death of a man who had defied her.
Posted by Gareth Russell at 23:12