Richard III and me 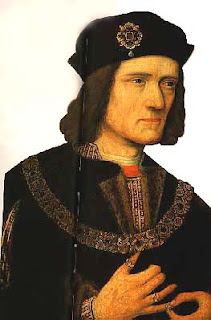 An article has appeared in The Washington Post about the debate surrounding the reburial of Richard III's alleged remains. In the very short time since it has gone up online, I have received several e-mails and comments asking me to clarify my views on Richard III, because in the article I am very briefly quoted as calling him out-and-out "a child-killer." I have also received several less-than-pleasant e-mails from die-hard Ricardians, because the article referred to me as "no friend to Richard III." To which I can only say: grow up.

To be quite clear, I bear no animus towards Richard III personally. When set in context, I actually pointed out that he has never been satisfactorily cleared of the charge of participating in his nephews' disappearance. That reburying him with a state funeral, when he could be guilty of such a crime would surely be a risk to the credibility of both the crown and the nation. There is, and there must be, a strong presumption of guilt when it comes to Richard III - as there would be on any responsible adult who was entrusted with the well-being to two teenagers who disappeared while in his care. The garish and often silly romanticisation of Richard III is something I find personally bizarre, but while it is my own opinion that he was complicit in Edward V's murder, I accept that there is room for debate. That room, however, cuts both ways and it should preclude us from either lionising or demonising the last Yorkist king.

In any case, if I could make a point to my unsought-for correspondents: simply because I do not agree with you does not mean that I was planted here by Satan or Margaret Beaufort to spin lies about Richard of Gloucester. I am not a friend of Richard III, no; my friends tend to have been born in the twentieth century, not the fifteenth. I did not, however, approach the question of his remains because I am in the pay of Henry VII; I answered it honestly. From my own studies - and I could be wrong! - I think Richard III did know about, and quite probably ordered, the murder of King Edward V and Richard, Duke of York, in 1483.

However, my point about all this is not to focus on whether or not Richard III actually did it, but to look at what it tells us about our own attempts to subvert and ignore the complexities of history in order to suit our own need for fairy tales, what ifs and conspiracy theories.

My articles on Richard III and the debate surrounding him are here: -