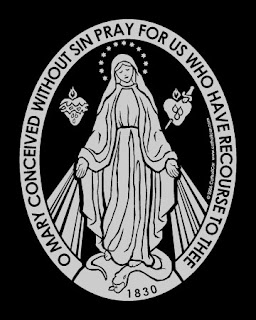 Today the miraculous medal (above) is one of the most popular items of Catholic devotion. Its prayer of "O Mary, conceived without sin, pray for us who have recourse to thee" dates from 1830 and the visions associated with a young French nun called Catherine Laboure.

The year 1830 had not been a good one for French Catholicism - or, rather, it had not been a good year for the more devout and strict of its adherents. In July, the monarchy led by King Charles X was overthrown and replaced by a constitutional monarchy headed by the King's estranged liberal cousin, Louis-Philippe. The unpopularity of Charles X's government had been created not only by its draconian attitude towards the press and suffrage, but also because of its zealous devotion to state-Catholicism. There was a joke in France that Charles X's monarchy was government by priests and for priests. A few months, young Catherine Laboure claimed to have beheld two miraculous visions of the Virgin Mary around the time of the feast of Saint Vincent de Paul.

Catherine was a young and romantic girl, with a sensitive nature. Her mother had died at the age of nine and at her funeral, Catherine had allegedly gravitated towards a statue of the Holy Virgin, proclaiming, "Now you will be my mother." Later, she took the decision to become a nursing nun after she dreamed of Saint Vincent de Paul, who had founded the order Catherine subsequently joined. She was pretty, kind, hard-working, devout and gentle. Many of the sisters liked her for her goodness.

One night, Catherine awoke and claimed she heard the voice of a child calling her to the chapel. She went and later said that while in the chapel, she heard the voice of the Mother of God, which told her: "God wishes to charge you with a mission. You will be contradicted, but do not fear; you will have the grace to do what is necessary. Tell your spiritual director all that passes within you. Times are evil in France and in the world."

The second vision took place on Saint Vincent de Paul's feast day, when Catherine saw the Virgin Mary surrounded by an oval light (which is also depicted on the medal, above.) Around the margin of the oval, Catherine felt or saw the words of the prayer which all the medals now carry, too. The oval gave way to twelve stars - the number of stars accredited to Mary by the Book of Revelation. Catherine also claimed she had seen the letter M, surmounted by a Cross, with images of the Sacred Heart of Jesus and the Immaculate Heart of Mary nearby. The Virgin told Catherine to report these things to her confessor, who should have them made into medals.

It took Catherine's spiritual director two years to believe her. In that time, he watched her closely for signs of dishonesty or mental imbalance. He found none and in 1832, the first of the miraculous medals were made by a local goldsmith. Catherine continued her life as a nursing sister, but she modestly did not like to draw attention to the fact that she was the one who had beheld the visions which gave birth to the Miraculous Medals. She died in 1876 and she was later buried in the Chapel of Our Lady of the Miraculous Medal in Paris. Her body was declared incorruptible in 1933; she was beatified in the same year and she was formally raised to the sainthood by Pope Pius XII in 1947.
Posted by Gareth Russell at 17:26