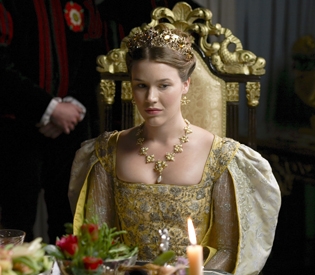 "Anne of Cleves seems to have gone down in history as the ugly one, the Flanders Mare who Henry found so unattractive that he just couldn’t bring himself to consummate their union ... Anne of Cleves managed to get out of her marriage to Henry with her head held high (and still connected to her neck, a feat in itself!), property and money, the title of “right dear and right entirely beloved sister”, a good relationship with the King and his children and she outlived Henry and his other wives, dying on the 15th July 1557 (although she was only 41). So, she can be seen as the one who survived, the one who got away, the lucky one..."

Continuing her series of debunking various myths surrounding Henry VIII's six wives, Claire Ridgway at The Anne Boleyn Files tackles the reputation of Henry's fourth wife, Anne of Cleves, who he was married to for only six months in 1540.

Above is a picture of English singer Joss Stone in the role of Anne of Cleves in Series 3 of Showtime's The Tudors.