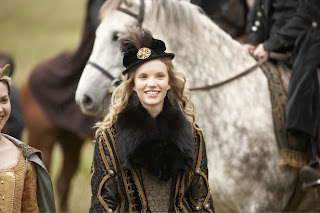 Above: British actress Tamzin Merchant as Catherine Howard in Series 4 of The Tudors.


It has been some time since I posted here, because I was visiting friends in New Haven, CT, and thanks to them all for such a wonderful, fun visit!
Claire Ridgway has continued her excellent series on reflecting on the popular stereotypes of Henry VIII's wives, reaching number five, his teenage queen, Catherine Howard, who was executed for adultery in 1542. Claire writes: -

"The Catherine Howard I believe in was not a nymphomaniac, she was simply a young and passionate woman who fell head over heels in love with the wrong man at the wrong time. It is clear from the letter that was found in Culpeper’s belongings that she was completely besotted with Culpeper and Antonia Fraser describes her as “the sort of girl who lost her head easily over a man, a girl who agreed generally with what men suggested.” How ironic that she really did lose her head over Culpeper! We have all known women who have fallen hopelessly in love with the wrong man, with a bad boy, and who have lived to regret it, poor Catherine was not so lucky."