February 8th, 1587: The Execution of Mary, Queen of Scots 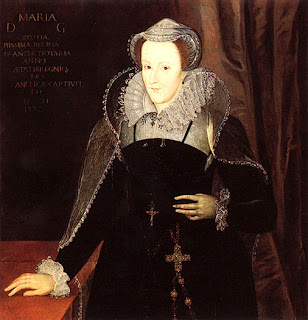 Glamorous women should never live too long. History doesn't like it that way. In return for missing out on the lives of their children and grandchildren, of growing old in comfort and security, history freezes them forever in an eternal prism of youth. Like a fly caught in amber, Anne Boleyn, Gabrielle de Polignac, Eva Perón, Marilyn Monroe and Princess Diana were spared the first signs of wrinkles, of infirmity, of senility, or even of middle age. Their husbands, their enemies, their co-stars, rivals, lovers, enemies, children and friends grew old. But they did not. The allure of their stories was achieved in no small part by the fact that their premature deaths meant that they could remain forever young. By this standard, Mary Stuart, Queen of France by marriage and Queen of Scotland by birth, lived too long. In her youth, she had been universally acknowledged as the most lovely princess of her generation. Poets had been driven half-mad by their worshipful desire for her and the sordid, tragic mess of her private life and all the men who had been drawn to her like moths to a flame, only to be burned and consumed, was a testament not only to her dazzling beauty but also the dangerous enchantments of her personality. Now, at the age of forty-four, Mary had lost her figure thanks to long years of inactivity and the only sign of her once legendary physical perfection which remained was the ivory-white, unblemished skin.
For nineteen years, the one-time Queen of Scots had been living under virtual house arrest as a guest and prisoner of her second cousin, Queen Elizabeth I. The two women had never met, but since Mary first became a widow at the tender age of eighteen, they had stalked each other's imagination and become much more important in one another's lives than any husband, lover, child or adviser ever could. Mary saw herself as Elizabeth's natural heir, but many saw her as Elizabeth's natural replacement. In some very real sense, the rivalry with Elizabeth Tudor was Mary Stuart's life and, at least for a time, vice-versa. Now, nearly two decades into the miserable purgatory of her confinement, the hysteria in the English Parliament and Court regarding the papist viper living amongst them had reached fever pitch. Despite fearing and mistrusting her implicitly, Queen Elizabeth had done everything in her power to prevent Mary being sent to the block. Butchering queens had been her father's past-time, not hers. And interestingly, given recent historiographical attempts to paint her as naturally crueler than her half-sister, Elizabeth had waited almost twenty times as long to murder Mary Stuart as Mary Tudor had to do away with Jane Grey.
Parliament, however, and most of Elizabeth's advisers had now had enough of Elizabeth's squeamish horror at spilling royal blood, which she regarded as near-sacred. Not for the first time since she had so foolishly fled to England instead of France, Mary had been the centre of a Catholic plot to depose and murder Elizabeth and put Mary on her throne instead. Letters between the deposed Scottish queen and the plot's ring-leader, an English courtier called Sir Anthony Babington, had been unearthed by Elizabeth's spy master, Sir Francis Walsingham. In them, it seemed quite clear that Mary had not only consented to being rescued from the manor house she was currently been kept at but that, for the first time, she quite explicitly approved of the plans to murder Elizabeth. Elizabeth had wept and sighed and stormed and raged, but, in the end, she had signed the death warrant, conceding that her own life was in danger and that this time, she herself had completely lost control of English public opinion which had turned with astonishing, brutal venom on Mary Stuart.
Whether Mary was guilty or not, there is now no earthly way of telling. A variety of theories explaining her correspondence with the Babington conspirators have been put forward by historians studying this case and none can be said to be truly unconvincing. It is the assessment of Mary's most recent biographer, the strongly sympathetic Professor John A. Guy, that she probably was guilty and her consent to Babington's treason and attempted regicide was the desperate action of a desperate woman. He does however believe that Walsingham knew of the plot long before he revealed it to Queen Elizabeth and only allowed it to continue for as a long as he did in the hope that Mary would eventually agree to it and he would at long last have the incontrovertible proof Elizabeth demanded before she would even contemplate making a definitive move against Mary. Other historians have hypothesized that Mary had only consented to being rescued by Sir Anthony and that the incriminating postscript, in which she condoned her cousin's assassination, was added by Walsingham and his agents. And others, perhaps slightly less convincingly, have argued with great passion that every last bit of Queen Mary's alleged correspondence from 1586 was the result of English forgery. Either way, we will never know for certain and what mattered in 1587 was that Elizabeth clearly believed Mary was guilty and Mary believed, with equal fervour, that as an anointed queen she was legally ineligible to be judged by English law. (For a brief discussion on the various theories on Mary's guilt on this blog, click here.)

An extract from the fantastic 1971 BBC series Elizabeth R below dramatises Elizabeth's reaction to her cousin's death. Mary is played by Vivian Pickles and Elizabeth by the incomparable Glenda Jackson, in one of my favourite performances of an historical person.