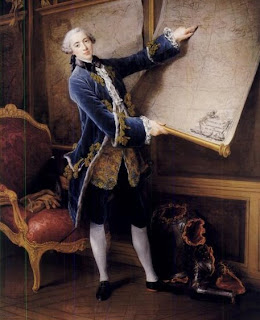 Joseph, comte de Vaudreuil (1740 - 1817) was a French aristocrat, soldier, art collector and one of the leading conservative politicians during the crisis that led to the beginning of the French Revolution in 1789. He was also one of the leading figures of the hectic social life at pre-revolutionary Versailles, even though Marie-Antoinette disliked him. Madame Campan recalls that the Queen was once particularly infuriated by Vaudreuil's rudeness when, in a fit of bad temper, he broke one of the queen's ivory billiard cues during a game in Diane de Polignac's salon.
One of the more interesting legends surrounding Vaudreuil is that he was the lover of Gabrielle de Polignac, "the beautiful duchess" and one of Marie-Antoinette's closest friends. Gabrielle's own marriage to the duc de Polignac was not particularly happy and it was suggested by some that Vaudreuil was the biological father of her two youngest children - Jules, the future prime minister, and Camille. (Her other two, Aglaé and Armand, had been born before she met Vaudreuil.)
Writing in her 2001 biography Marie Antoinette: The Journey, Lady Antonia Fraser considers this likely and asserts that the story of the two being lovers is, in any case, almost definitely true. On the other hand, Elena Maria Vidal, the author of Trianon and Madame Royale, has argued persuasively on her blog that the story of the Polignac-Vaudreuil love affair is probably nonsense. My own feelings actually correspond (ironically enough) with the Wikipedia article on Vaudreuil, which argues that if the old legend is true that Vaudreuil's mistress was actually the acclaimed artist, Madame Le Brun (which I think is true), then it's fundamentally unlikely that Vaudreuil was also sleeping with Madame de Polignac at the same time. To quote: -

"At the French court, he attached himself to the king's youngest brother, the comte d' Artois ... and formed a strong attachment to the beautiful duchesse de Polignac, an intimate friend of Queen Marie Antoinette and one of the leaders of high society at Versailles. The liaison with Gabrielle was viewed as sexual by many observers then and since, but some suggested that Gabrielle's nature was too essentially cold, class-conscious, (given Vaudreuil's Creole ancestry) or remote to have succumbed to an affair. Many of her friends despised him ... By now, Gabrielle had apparently decided that Vaudreuil was beginning to weaken her own position as a leader of aristocratic society and her friendship with the Queen. She began to avoid him and in 1785, she abruptly left Paris to spend time visiting friends in London. Her visits to spas in order to take the waters in the company of the Duchess of Devonshire became more prolonged and, by 1786, she saw Vaudreuil on an extremely rare basis and almost never without other people around her... In 1784, the celebrated artist Élisabeth-Louise Vigée-Le Brun painted two portraits of Vaudreuil. He was one of Vigée-Lebrun's most devoted patrons, and owned many of her works in his vast private art collection, which included a portrait of Gabrielle de Polignac. Some have speculated that the friendship between Élisabeth and the comte was not strictly platonic. Had an affair taken place, it would also have taken place at the same time some have argued he was sexually involved with the duchesse de Polignac, an unlikely development given Gabrielle's exalted sense of her own importance. The existence of one affair would in all probability negate the likelihood of the other."

Were Gabrielle de Polignac and Joseph de Vaudreuil lovers? It's impossible to say. My own feelings are that given Gabrielle's personality and her treatment of him, it seems fundamentally unlikely. It seems even less likely that anyone but her husband was the father of her two youngest sons. Vaudreuil was not exactly a discreet personality and if he had been Gabrielle's lover, it's hard to imagine that he could have resisted boasting that he was romantically involved with the most beautiful woman in France. However, we shall never know for certain what the truth of their relationship dynamic was. What got me thinking about Vaudreuil today was a post on the blog Marie Antoinette's Gossip Guide to the 18th Century, which contained a quote about the count's personality which I have never come across before. It focuses more on his political career and it gave me pause for thought. It's always useful to be reminded (I think) that we should never accept at face value someone's historical reputation and should always be asking questions. Commenting on Vaudreuil's surviving letters, an Irishman in 1836 wrote: -

"They prove him to have been a man of sound judgment and a model courtier. He saw that any attempt to induce foreign Powers to interfere on behalf of Louis XVI, at least during the Constituent Assembly, would only do mischief to the Royal cause. He was ready enough to oppose the Revolution, but he would not, as so many of the emigres did, join the armies of the enemy in fighting against France. He did much to restrain the fiery temper of the Comte d'Artois. His prudent and respectful advice to the prince concerning his passion for Madame de Polastron was the means of avoiding much scandal."

Of course, Vaudreuil's own letters are going to paint him in a flattering light and I'm inclined to think that the instance of the Queen's billiard cue shows he had both a temper and less-than-perfect manners. However, as I say, it's always a good idea to keep questioning and to find random, brilliant sources like this to flesh out our understanding of the past.
Posted by Gareth Russell at 14:56