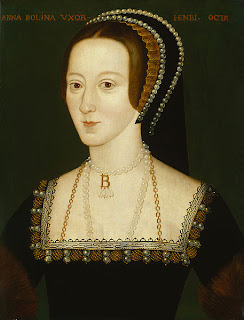 Some regular readers may remember that last month I wrote about the National Portrait Gallery's attempt in London to raise enough money via subscriptions and donations to restore one of the most famous and iconic portraits of Anne Boleyn (above.) The campaign is doing well and it has received support and backing from some noted Tudor historians, including Alison Weir, author of The Six Wives of Henry VIII, Children of England, Mary Queen of Scots and the Murder of Lord Darnley, The Lady in the Tower and several other novels and biographies, including the excellent The Lady Elizabeth. Some of Alison's autographed books are being given away as part of the Facebook campaign to raise awareness for the NPG's campaign. Miss Weir has said: -

"I am delighted to endorse this page, and to lend my support to the fundraising for the restoration of this important - indeed, the definitive - portrait of Anne Boleyn. It has entranced and intrigued me since I was a young teenager and first became aware of Anne's story. Even though it is only a copy of a lost original, it is the portrait by which most people identify Anne, and it captures the charm and wit of which contemporaries spoke. It also bears testimony to the famous 'little neck' and the eyes that were 'black and beautiful' and 'invited to conversation', as well as to Anne's famed elegance in dress. In short, the portrait captures the essence of Anne Boleyn, despite rogue theories that it was painted to make her look like her daughter, Elizabeth I, from whose reign it probably dates. The proliferation of other versions, as well as an image on a medal struck in Anne's lifetime, proves that this portrait type is an accurate representation of what she actually looked like. We must save this important and iconic portrait so that future generations will not know it only from photographs."

Natalie Grueninger, who also runs the On The Tudor Trail website, has provided me with the Facebook page for the campaign - www.facebook.com/SaveAnneBoleyn. If you care about art history or about the Boleyn story, please do join. It's a worthy cause and, as Miss Weir says, "an important and iconic portrait."
For this blog's earlier report on the portrait campaign and the history of the portrait itself, click here.
Posted by Gareth Russell at 03:01