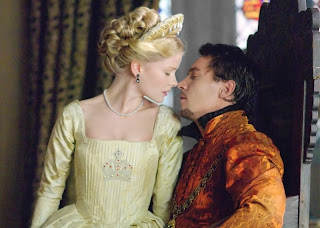 Well... those are three words I never thought I'd type.


Part III in her series of challenging the stereotypes surrounding Henry VIII's queens sees Claire Ridgway rising to the challenge of defending wife number three - Jane Seymour (seen above in Series 2 of The Tudors, as played by Icelandic actress Anita Briem along with the Irish actor Jonathan Rhys Meyer as Henry VIII.) Jane and Henry were married on May 30th, 1536 - eleven days after the execution of his second wife, Anne Boleyn. They remained married for eighteen months until Queen Jane died as a result of post-natal complications, following the birth of her son, the future King Edward VI.
Personally, I don't agree with Claire's assessment that Jane was a pro-actively virtuous and morally upstanding woman and I definitely don't believe that there's any evidence regarding the old myth that she loved and revered Henry's first wife, Katherine of Aragon. I tend to think the image of Jane as a virtuous "matriarch in the making" (to quote Alison Weir) comes from the fact that simply because she didn't do anything bad or controversial, she must therefore have been good. A lack of malice does not necessarily correlate to being pro-actively virtuous. When I think of Jane, I can't help but remember Stefan Zweig who, writing about another royal woman in the 1930s, said she was "devoid of any vigorous wish to do good, devoid of any inclination towards evil." (I may be paraphrasing slightly!) Even the idea that it was she who rehabilitated Henry with his eldest daughter Mary seems to me to be rubbish, since Jane neither wrote to Mary nor did anything to alleviate her suffering when her father and Lord Cromwell were psychologically torturing her into submitting to the Act of Supremacy in 1536. Her gift of a diamond ring to Mary after the submission was touching, yes, but it was all part of the aristocratic feminine culture of gift-giving. It was standard, not a sign of deeper emotion and above all else, Jane had passively beheld Mary's anguish in the months beforehand. Jane may have liked Mary, but she certainly wasn't her champion! Anyway, I digress! To me, Jane Seymour was quite simply average - neither exceptionally virtuous, nor exceptionally duplicitous.
However, as always, Claire writes very well and it's always great to hear somebody else's opinions on Henry's marital misadventures - when they're well-informed, as hers are. Despite my own personal opinion that Jane was basically a bland personality, Claire raises some brilliant points and I firmly agree that it's wrong to see Jane as dancing across Anne Boleyn's grave. To quote: -

"...there are those who believe that Jane was took an active part in Anne’s downfall by poisoning Henry’s mind against his wife and historian Agnes Strickland saw Jane as someone who coldly and mercilessly stood by while her behaviour with Anne’s husband led to Anne’s miscarriage and ultimately Anne’s death. Some imagine Jane as delighting in planning her marriage to Henry while Anne was imprisoned in the Tower waiting for the hour of her death, but just as Anne had no choice in marrying Henry, and we can’t blame Anne for what happened to Catherine of Aragon, Jane had no choice in what happened either. Jane had loved and respected Catherine of Aragon and so probably did not have much respect for Anne Boleyn, but that does not mean that she took delight in what happened to Anne... Having researched Jane Seymour and having read contemporary accounts of her behaviour as Henry’s wife and queen, I have to take her at face value and believe that she really was the sweet, virtuous, kind woman that she made herself out to be, either that or she was an incredibly good actress! I do believe that she was coached by Carew and her brothers but I don’t think that she had to act, I think her behaviour was natural. As much as I’d love to believe that she had a dark side, I don’t believe she had one, she really was a virtuous woman through and through and cannot be held accountable for what happened to Anne Boleyn, just as Anne cannot be held accountable for what happened to Catherine of Aragon. Jane made Henry happy, she gave him the gift of a son, she was a peacemaker, she was popular with the people and she was a humble, kind woman, it’s just a shame that her time as queen was so short-lived."


For this blog's discussion on Jane's early rise to power, click here.
(An author's note on this post: I now accept that I was probably wrong in suggesting that the selection of the crimson by Anne Boleyn for her trial carried some kind of colour-coded significance. It has been pointed out to me by a friend and colleague that it's equally likely that she just happened to like the colour and by now had limited clothing options left open to her. A fair point which I find convincing and now that I think about, I don't think someone like Anne would have made the mistake of confusing persecuted innocence with martyrdom. Simply because one was innocent of a secular crime did not make you a martyr.)
Posted by Gareth Russell at 20:20