The Prince of Wales in Belfast 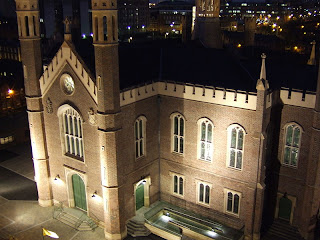 With thanks to Lord Belmont in Northern Ireland for his post on the Prince of Wales's current visit to Belfast.
HRH The Prince of Wales yesterday visited Saint Malachy’s Roman Catholic Church (above), Alfred Street, Belfast, to view the result of a £3.5 million restoration project, where he was greeted by Northern Irish sporting hero, Dame Mary Peters, who is currently serving as Her Majesty's Lord-Lieutenant of the County Borough of Belfast.
Outside the chapel, the Prince listened to a brief talk on the restoration work to the outside of the church, which was given by the Curate of Saint Malachy's, Reverend Father Martin Graham. In 1941, during the German air raids on Belfast, a Luftwaffe bomb resulted in extensive damage to the original stained glass windows of Saint Malachy's. Due to economic circumstances during the war, they had to be temporarily repaired using concrete.
In 2006 the Diocese of Down and Connor embarked on a project to restore and modernise Saint Malachy's simultaneously. The red-brick exterior of the chapel and a full internal restoration of both the interior and the windows, based on historic records and research, was to be accompanied by installing full access for disabled parishioners and visitors throughout the church. The project was funded in part by fundraising initiatives organised by the diocese and by a substantial grant from the Northern Ireland Environment Agency's Historic Buildings Grant.
The lavish interior of Saint Malachy's, which is probably the largest Roman Catholic chapel in Belfast city centre, is known for having based part of its design on the Henry VII Chapel in Westminster Abbey, where King Henry VII and his queen, Elizabeth of York, are buried. 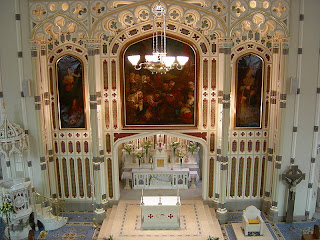 After giving his talk Father Graham escorted the Prince of Wales inside to see Saint Malachy's interior and invited Ms Elizabeth McLaughlin, Secretary of Saint Malachy’s Pastoral Council, to present His Royal Highness with a gift of a montage of photographs depicting Saint Malachy’s Church before, during and after the restoration. Inside, the Prince of Wales also signed the chapel's visitors' book.
After viewing the church's interior, the Prince of Wales was invited to the nearby Parochial House where he met privately with some of the leading members of the Roman Catholic Church in Northern Ireland, including Bishop Treanor and Bishop Walsh, and key members of the Saint Malachy's parish, including Father Curran, Father McGinnity and Father Graham over light refreshments. At a separate meeting later in the day, Prince Charles chaired a discussion with a number of church representatives and other stakeholders to consider the role of redundant and distressed churches and church estates in the heritage-led regeneration of communities.
Posted by Gareth Russell at 14:44