February 12th, 1554: The Execution of Jane Grey and Guildford Dudley 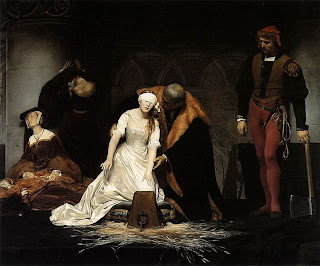 "If justice is done with my body, my soul will find mercy with God. Death will give pain to my body for its sins, but the soul will be justified before God. If my faults deserve punishment, my youth at least, and my imprudence were worthy of excuse. God and posterity will show me more favour."
- Lady Jane Grey, the night before her execution, aged seventeen.

The Victorians were obsessed with her story and considered the downfall and execution of Henry VII's great-granddaughter, Lady Jane Grey, to be one of the single most edifying examples of femininity offered by British history. Jane, the devoutly Protestant granddaughter of Henry VIII's younger sister, Mary, Duchess of Suffolk, had been placed on the throne by her parents and ambitious father-in-law in the wake of King Edward VI's death in 1553. It had all been part of an attempted palace coup to maintain the Protestant monarchy established by young Edward and to prevent the throne passing to his Roman Catholic half-sister, Mary, daughter of Henry VIII and Katherine of Aragon. Jane's usurpation had famously lasted nine days, before Mary was able to imprison her and install herself as Queen of England and Queen of Ireland.
Given that Jane had been in her mid-teens when she was caught up in this scheme, the new Queen had initially been content to show her mercy and to keep her locked up in the Tower of London for the time being. Phenomenally well-educated, Jane was content enough with this arrangement since it left her to go back to her books in peace and finally removed her from the care of her abusive parents and her ambitious in-laws, whom she despised. However, Mary I's impending marriage to her second cousin, Philip of Spain, was putting pressure on the Queen. The last time a Spaniard had married into the English royal family, the Spanish government had made the same demand - all internal threats to the crown must die before the marriage could go ahead. Last time it had resulted in the execution of the Earl of Warwick before Katherine of Aragon was allowed to set sail for England. Now, Philip's father the Emperor was insisting that Jane and her adolescent husband, Lord Guildford Dudley, must die before he could send his son and heir to marry Queen Mary. The Hapsburgs' ambassador to London, Simon Renard, was a particularly firm advocate that "a little severity" must be used to rid England of the Grey-Dudley threat for good. For a time, Mary had resisted imperial advice on Jane's fate, but the Wyatt rebellion against her rule in 1554 changed her mind and sealed Jane's fate. With repugnant selfishness and stupidity, Jane's father, the Duke of Suffolk, had sided with the rebels and when the uprising was defeated, Mary began to change her mind about sparing young Jane's life.
It is often erroneously assumed that her father's involvement in the Wyatt rebellion forced Queen Mary's hand and made Jane Grey's (or Jane Dudley, as we should properly call her now that she was married) execution a political inevitability. Political pragmatism made the unpalatable idea of butchering the teenager unavoidable, or so the traditional version of events goes. However, the fact that it was not wholly necessary to execute Jane is shown by the fact that in the days leading up to her execution, Queen Mary was quite prepared to spare her life. But only if she converted to Catholicism. In pursuit of this goal, she dispatched a learned and gentle priest called Richard Feckenham, the newly-installed Abbot of Westminster.
For Jane, who despite her youth was a Protestant both by sentiment and conviction, Abbot Feckenham's visits were ones of bittersweet agony. Despite a recent trend in history to argue that given the strength of Jane's Protestantism, had she managed to stay on the throne she would have become a "Bloody Jane" to English Catholics in much the same way as her cousin was about to become "Bloody Mary" to the nation's Protestants, Jane actually struck up a warm and friendly relationship with the Catholic priest, one which Mary was demonstrably incapable of showing to any Protestant clergyman.


After completing this article, I read Claire Ridgway's discussion of the same events at The Anne Boleyn Files and she includes a very moving quote from Professor Eric Ives, author of The Life and Death of Anne Boleyn and also of the new biography Lady Jane Grey: A Tudor Mystery. I hope Claire won't mind my quoting it here, because it's an absolutely beautiful reflection on the power of Jane's story: -


“The pages of history are asterisked with names which defy the erosion of time. Jane Grey is one such, but strangely so. Truth to tell she counted for little. She was important for barely nine months, she ruled for only thirteen days. She contributed little to writing and nothing to ideas. She founded no dynasty and left almost no memorabilia. Then what is it, keeps the story of Jane alive while many more significant figures in history are recalled only by scholars? For many years Jane was a saint in the Protestant pantheon, but martyrs are now out of fashion – and so too ideal Victorian maidens. In the West, growing secularization ensures that relatively few people even understand the issues which meant so much to her. And yet her name still lives. Something is due to a memorable sobriquet: “the nine days queen” – not any Jane, that Jane. Romance, too, is part of the explanation; along with Anne Boleyn, Katherine Howard and Mary Queen of Scots, Jane completes a quartet of Tudor queens who died on the scaffold. Undeniable, too, there is the macabre attraction of the girl sacrifice. She died Jane Dudley, but is universally remembered as Jane Grey, Ariadne chained to the rock. All this and more. But the fundamental justification for remembering Jane is the justification for remembering Anne Frank centuries later. They speak for the multitude of brutality’s victims who have no voice.”