Is there anything new to say about Anne Boleyn? 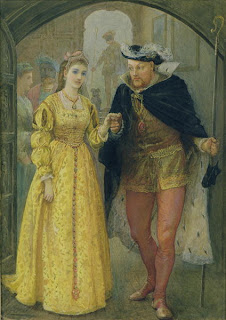 Every now and then, a new book appears on the market claiming that it's going to revolutionize our understanding of Henry VIII's second queen. The blurb usually proclaims that at last the truth about Anne Boleyn has been discovered and that this author has somehow managed to solve a mystery that every other historian has been getting wrong for the last five hundred years. There is nothing wrong with new works of historical scholarship, of course, but are modern writers too quick to claim that they've got something new to say in the hope that this claim will persuade eager Tudor fans to part with their money and buy the book?

There is still room - I think - for another, full-length, and proper biography of Anne Boleyn. But only just. I've spent years in Anne's company and, although the last two years of my academic life have been spent far more with Catherine Howard, I still retain a soft spot for the earlier half of Henry's reign and I know the scholarship surrounding Anne like the back of my hand.

If I'm honest, I don't think I would buy a book that claimed that it was going to offer us a totally new picture of Anne Boleyn. Because I know that it couldn't. Every major version of her personality has already been suggested by historians. If you choose to believe that Anne Boleyn was a haughty schemer who deserved her negative press, then you're really just repeating the view of her that was created by historians in the nineteenth-century like James Anthony Froude and Paul Friedmann. If you want to present her as a shallow, if pretty, dilettante, then you're treading in the footsteps of G.W. Bernard and the late Sir Geoffrey Elton. Anne as a charming aristocrat is the view taken by Retha Warnicke, Lady Antonia Fraser or Elizabeth Benger. Anne the gutsy and opinionated politician who helped shape the English Reformation was, of course, immortalised in the stupendous biography of her by the late Eric Ives and in the research of David Starkey. Anne as a good politician, but unlikable woman, has been repeated in the numerous books written about her era by Alison Weir. Anne the Protestant martyr was recently resurrected in the 2004 biography of her by the late Joanna Denny. Anne as a common social climber was the version presented by A.F. Pollard in his biography of Henry VIII. And Anne as an icon of wronged womanhood was how Agnes Strickland, Serena Banbury, Jane Austen and Francis Bacon saw her - long, long ago. If you're going to claim that your book offers a radically new interpretation of Anne Boleyn, then you are either lying or quite clearly haven't done enough reading. Different episodes in Anne Boleyn's life do need to be studied, detailed and debated in more detail - that is beyond doubt. Website like Lara Eakins's Tudor History or Claire Ridgway's The Anne Boleyn Files can, and do, show the rich potential that there still has in exploring Tudor history and for popular culture's interaction with it. I do firmly believe that there is room in the market for more books on her, but, at the moment, I don't think that any could justifiably claim that they're offering a completely new portrait of her. At some point in my life, I do intend to write a biography of Anne myself, but I am aware of the intellectual debt I would owe to the great historians, archivists, writers and activists who came before me.

What about the claims that there is new evidence that an author discovered which enabled them to write a fresh take on Anne Boleyn's life and death? Well, that's nonsense. Let me assure you that if any new evidence regarding Anne Boleyn came to light, it would make headline news. This is one of the most famous women in history, with a huge international modern fan-base. If any new evidence was discovered, it would immediately be submitted to one of the top universities in the world to be studied, analysed and dated. Newspapers would report on it and the Internet would be buzzing with the rumours. When G.W. Bernard's book Anne Boleyn: Fatal Attractions was released in 2010, one of the greatest criticisms of it was the marketing department's claim that Professor Bernard had uncovered "new" evidence from 1536 that supported his view that Anne Boleyn may actually have been guilty of adultery. The evidence in question was a poem or letter written by Lancelot de Carles, the French Bishop of Riez, and it was first published in the English language back in 1929. The source had simply never formed the main part of a scholar's argument about Anne Boleyn's death, which is how the advertising campaign could spin it as something "new."

There is no new evidence known about today and, if we find some in the future, then - trust me - you'll know about it before you read it on the cover of a book.

One could, of course, justifiably query the translations of the existing sources. Anne Boleyn's letter to her father, allegedly written in about 1514, has been dated, stored and analysed by Cambridge University; that it's real is beyond any reasonable form of doubt. However, a new translation of its French may prove interesting - especially given that Anne was a child at the time and still learning. However, re-translation can pose as many problems as it creates. Having taken a course in paleography, I was stunned at how difficult a science it is. Unless you have been able to personally see and hold the original documents (not photocopies or translations), then it's next-to-impossible to accurately re-translate them from the original sixteenth-century English, French, Latin, Italian, Spanish or German. By the standards of paleography, all you'd be doing is imposing modern versions of linguistic syntax onto a sixteenth-century source, providing a new (and probably inaccurate) interpretation of sources that have already been rigorously studied, translated, dated, cross-checked and validated. Having made your inaccurate translation, which you believe to be accurate, a writer then runs the risk of getting carried away with it and making assertions that have no basis in fact. One respected and very successful writer who did so was Alison Weir, who in her 2002 book Henry VIII: King and Court, argued on the basis of such a mistake that Anne Boleyn had actually been pregnant at the time of her execution. To Miss Weir's credit, however, she did what many writers are incapable of doing and admitted in her future books that her theory had been wrong.

My point in all this is that I worry that the Tudor market is becoming too sensationalist and too undemanding. We are not holding our writers up to a high enough standard. It is an easy, cheap and dishonest ploy to claim that one book is going to radically change our views on Anne Boleyn. It is also an extremely unlikable claim, since it implicitly means criticizing or denigrating all the other writers on that period. When I completed my dissertation on Catherine Howard in 2011, I was very, very hesitant about claiming that my version of her downfall offered something radically new. I now realise that the version of Catherine's life and death that I suggested after exhaustive research was different. Or, rather, it offered a different focus. I wouldn't write a biography or a dissertation unless I thought I had something worth saying; something new. But I didn't go too far and say that everyone else who'd ever written about Catherine had been wrong, or that I (and I alone!) understood Catherine Howard's true personality. I think I understood the extraordinary circumstances that led to Catherine's death in better detail than other people, and I hope that doesn't seem too arrogant in saying so. You see, there can be something new in Tudor historiography, but everything new is, by now, utterly impossible.

We owe it to the past, and to our readers, to be honest. New books are always welcome, provided that they don't claim to be something that they're not. Anne Boleyn's life was an extraordinary one - rich in human drama and social context - it deserves to be dealt with by people who understand the discipline of History and the limitations of our craft. It does not deserve to be sensationalised and cheapened for the sake of it. The poor girl has already had enough of that in the past.