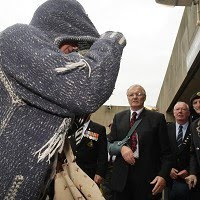 'Disgusting' is indeed the word.

Wendy Lewis, 32, was jeered by a "Guard of Dishonour" of decorated British war heroes, when she arrived at Blackpool Magistrates' Court. She was arrested following a night of drunkenness in which she urinated on the Cenotaph, (Blackpool's war memorial to those who gave their lives in the two World Wars and subsequent conflicts), before she proceeded to perform a sex act on a man nearby.

It is hard not to agree with the description of this woman as "Britain's most disgusting person."

It is good to see that the veterans made a showing at this woman's hearing to represent the memories of their fallen friends and comrades whose memory she insulted - and those of their families. It is only to be hoped that the British public treat Miss Lewis in precisely the same way. The manner in which this woman behaved is beyond the pale, insulting, disgusting and absolutely abhorrent. The fact that she showed absolutely no contrition, but instead told the soldiers to "f**k off" reveals exactly what kind of person she is - as if any further proof was needed.


A woman branded "Britain's most disgusting person" after urinating on a war memorial is on the run after fleeing court.

Wendy Lewis, 32, was given a "guard of dishonour" by angry war veterans - who she told to "**** off" when she appeared at Blackpool Magistrates' Court.

But she fled the building 20 minutes later and a warrant has now been issued for her arrest.

Lewis had been caught on CCTV relieving herself on the Cenotaph in the town before performing a sex act on a man in public.

She was found guilty of outraging public decency at an earlier hearing and was expected to face a community service order.

But Lewis, who arrived 40 minutes late for her 9.30am court appointment, promptly disappeared 20 minutes later before her case was called on in court.

Earlier, Lewis, of Princess Street, Blackpool, had run the gauntlet of angry old soldiers when she first arrived.

She covered her face with a hood and lashed out at photographers and TV crews as she walked to the court building.

A handful of veterans, proudly wearing berets and campaign medals on their blazers lined the court steps to form the "guard of dishonour" for Lewis. They clapped and shouted, "Disgusting!" as she entered the building.

Police officers will be on the look-out for Lewis and if she is arrested this weekend will spend it in the cells until court resumes on Monday morning.