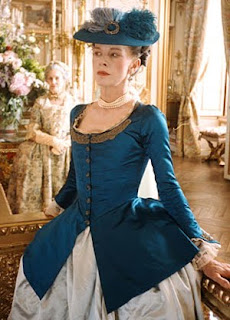 "Upon Louis XV's death, a stunned Marie Antoinette and now Louis XVI stood in their inner apartments of Versailles. Famously, they asked God to guide them because of the disadvantage of their youth. Of course, a court does not wait for prayers or thought; there was proper etiquette to be carried out right away."

The blog, Marie Antoinette's Gossip Guide to the 18th Century, reports on the death of Louis XV in 1774, when his young grandson was proclaimed King Louis XVI, with his 18 year-old wife, Marie-Antoinette of Austria, standing by his side.

The young couple had been waiting for a few days for the old King to succumb to his agonising death from smallpox and amidst their grief (the Queen was now leaning on her husband's arm, crying), they were forced to endure the elaborate ritual of the courtiers and aristocrats of Versailles swearing an oath of allegiance to their new Sovereign, moments after the bells began tolling to announce the death of his grandfather. Equally confused about this procedure were the other members of the Royal Family - the King's young brothers, the Comte de Provence and the Comte d'Artois, and their wives, Marie-Josephine and Maria-Theresia.

Luckily, on hand to guide the young King and Queen was Marie-Antoinette's chief lady-in-waiting, the impeccably proper Comtesse de Noailles (above, played by Judy Davis in the 2006 motion picture Marie Antoinette), whom the Queen had nicknamed "Madame Etiquette" because of her encyclopaedic knowledge of (and obsession with) royal decorum. Ordinarily, Marie-Antoinette found the Countess to be overbearing, stuffy and irritating, but in the midst of the confusion and pandemonium of the King's death, she was certainly glad to have Madame de Noailles on hand to tell them what to do, introduce the right people and guide them around the room to receive the requisite protestations of loyalty.

For more on the story of the etiquette surrounding the death of Louis XV and the proclamation of Louis XVI, read the Gossip Guide's account here.
Posted by Gareth Russell at 21:35