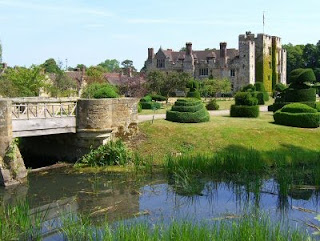 "It would be so wonderful to see you all again for Assumptiontide, which we are marking with a supper and dance at Hever this year, as usual. I do so hope you can make it. Anne is back from London, as the Queen is on progress for the summer, and, as usual, she has been the most wonderful help to me, especially as this time of year always has such unhappy memories with the anniversary of Henry's death weighing upon my mind. Mary has come back from Leeds, where she and William have been decorating their new house together, although sadly William could not accompany her this time, as His Majesty had need of him. My husband, alas, remains in London for much the same reason and George has gone back to Oxford, to spend the holiday with some of his classmates... You asked about the Wyatts in your last letter. Well, old Sir Henry remains a martyr to the gout, as always, his eldest girl, Margaret, is at Court with Anne and she has come home at the same time and for the same reason. Her younger sister, Mary-Anne, is due to be presented as a debutante at Court, next summer, with my mother acting as her sponsor. Truth be told, I think she is rather looking forward to getting away and once it is decided whether she is to presented to the Queen or to the Duchess of Suffolk, preparations can begin in earnest. As for Tom and his wife, Bess, I am afraid I am at a loss as to what to tell you. In short, Jocasta, it can best be put this way - Tom has fallen in love with Anne who, quite sensibly, has rejected his advances, and Bess has fallen in love with anyone and everyone, except her husband. Their marriage is not just miserable but conspicuous in its misery, which  makes matters worse, as I know all too well from the behaviour of my brother in recent months. In any case, the Wyatts' marriage has caused quite the scandal, as only scandals which take place in either the London Set or in small, rural communities, can. And it is to Tom and Bess's great misfortune that they happen to be members of both.... Do write to me with all your news, With love and prayers, Elizabeth."
- A letter from Lady Elizabeth Boleyn to Lady Jocasta Howard, from The Rise and Fall of the House of Boleyn by Gareth Russell

Anne's eyes flickered contemptuously over Bess, but her grandmother continued on in a tone so flawlessly polite that had one not known better, one would have assumed that nothing on Earth could possibly have given the Dowager Lady Boleyn greater pleasure than having the notorious Mrs. Wyatt in her company.
"Thank you for inviting us," Tom replied, as his wife fixed Anne with a look of sizzling dislike. "The church looks lovely, Your Ladyship."
"Oh, you are frightfully kind," the Dowager replied carelessly. "It's so nice to see all the people of the parish together on a day such as this, don't you think?"
"Of course and nothing bar ill-health could have kept my father away. He sends his apologies."
"Oh, he shouldn't be so silly as to worry about apologising for something like that. I was so sorry to hear that he was indisposed. Won't you please pass along my very best wishes?"
"Yes, thank you, milady, you're very kind. I had hoped to speak to Lord Kent today, on my father's behalf. We have not seen him since his father's funeral."
"I'm afraid His Grace the Earl is indisposed also," explained the Dowager, "and is unable to attend."

"That's a shame," said Tom, catching the exquisitely arched eyebrow now raised into a perfect arc of disbelief on Anne's forehead. The Earl of Kent was evidently not indisposed, but either too drunk or too indebted to make a reasonable showing at today's festivities.
"Isn't it?" smiled the Dowager. "Well, if you will excuse us, the Mass will be starting at any moment. Will you be joining us for supper, later?"
Tom glanced over at Anne questioningly, but her eyes were now so devoid of feeling that she seemed rather to be staring through him. "I am not sure, my lady," he stammered. "We... I had thought perhaps to start back for London in the morning..."
"Nonsense. My granddaughters have arranged a ball in the gardens afterwards and I am sure you would enjoy it. Do call anytime after six o'clock, this evening. It would be too impossibly lovely to see you both, and your wonderful sisters, of course. Come, Anne."
As the Dowager made for the front of the church, Anne turned her attention on Tom at last, "So nice to see you both," she smiled politely. It was hard to remember something she had said which had cut Tom more deeply.
© Gareth Russell
Posted by Gareth Russell at 22:17