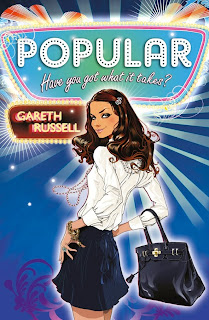 I am very pleased to be able to show-off the book cover for my first novel, Popular. The novel, which follows the adventures of a group of Belfast teenagers, all of them struggling to fit into the popular clique governed by the beautiful but Machiavellian Meredith Harper, will be published in the United Kingdom and the Republic of Ireland in 2011 by Puffin.

Popular has a Facebook fan page - "Popular" by Gareth Russell - and in the next weeks and months, there will be more on-line information about it and its sequels.

The wonderful cover illustration of Meredith Harper is by Gavin Reece at New Division.

MEREDITH HARPER is rich, popular, manipulative and almost unnaturally beautiful. At the age of sixteen, she’s already a social legend.

IMOGEN DAWSON, beautiful and sexy-chic, she’s Meredith’s best friend and a total bombshell. And doesn’t she just know it. Then there’s . . .

KERRY DAVISON, daddy’s little princess with a passion for pink and a penchant for Fabulous Induced Breakdowns. Now meet

CAMERON MATTHEWS, six-feet tall, blue-eyed and the most popular guy in school.

Together they’re unfathomably gorgeous and, like, totally beau. But under the glamorous surface of parties and spa-days is a wealth of comforting lies and convenient silences, bitching, break-ups and scandal.