The Feast of Our Lady, Queen of the Angels 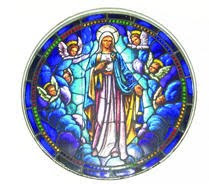 Today is the Feast of Our Lady, Queen of the Angels. In the great medieval epic, Dante's Divine Comedy, perhaps one of the finest works of European literature, in which the author takes an imagined journey through Hell, Purgatory and Paradise, Dante and his dead love, Beatrice, reach the section of Heaven where the Virgin sits, surrounded by an angelic host singing of their love for "the Rose in which the Word Divine became incarnate."

Dramatised in Paradiso, Canto XXIII of the Divine Comedy, in Dante's presence, the angels sing: -

"I am Angelic Love, that circle round
The joy sublime which breathes from out the womb
That was the sanctuary of our Saviour;
And we shall circle, Lady of Heaven, while
Thou followest thy Son, and mak'st diviner
The sphere supreme, because thou enterest there."

Thus did the circulated melody
Seal itself up; and all the other lights
Were making to resound the name of Mary. ....

Thereafter they remained there in my sight,
"Regina coeli" singing with such sweetness,
That ne'er from me has the delight departed.

Although the Inferno section of the Divine Comedy is much more famous than those chronicling the author's imagined version of Purgatory and Paradise, it is definitely worth reading all three, if one has the chance. Dante's work still has the power to move and shock, in equal measure, not just because it captures the sheer depth and sophistication of medieval piety, which is all too often dismissed as being simplistic, intellectually-backward nonsense but also because in the midst of his fantastic writing - merging both theology and imagination - there is something still profoundly heartbreaking about the fact that when it came to picking a guide to take his autobiographical self through the splendours of Heaven, Dante chose the figure of his deceased love, Beatrice, a tragic declaration of how much he still missed her and how he hoped one day to be re-united with her.
Posted by Gareth Russell at 17:20