"In a true democracy, everyone can be upper class and live in Connecticut": Has the Preppy Era gone too far? 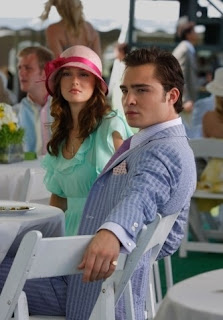 Thirty years after the publication of Lisa Birnbach's The Official Preppy Handbook, Eric Felten wonders if the culture of preppiness has actually been harmful to America's middle- and upper-classes? I think he may be overstating the case slightly, but it's well-written and it does point out that what was perhaps intended as satire suddenly became a bible for those who wish their lives were like something out of a Cecily von Ziegesar novel.

Via Tea at Trianon, to quote: -


The clothes may have been the most visible part of the preppy phenomenon, but they represented only a small part of the upper-class way of life Ms. Birnbach was championing (however cheerfully sly and subversive her advocacy may have been). Much of the book was devoted to a world-view that was casually aristocratic. Ms. Birnbach promised to make that outlook available to one and all. "In a true democracy," she wrote, "everyone can be upper class and live in Connecticut."

How could the suburban teenager from Peoria or Pomona all of sudden be "upper class"? It was less a matter of pink oxford cloth and Kelly-green poplin than of adopting an aristocratic lassitude, an attitude that exuded privilege by treating effort with contempt. One simply mustn't try too hard. A key principle of what Ms. Birnbach called the Preppy Value System was Effortlessness: "If life is a country club, then all functions should be free from strain."

There's no denying the seductive appeal of the old aristocratic disdain for those who strive. How much nicer (and, of course, easier) it is to adopt a blasé and boozy contempt for the grinds and geeks who put in effort than it is to compete with them. The original Handbook warned acolytes not to waste their college days studying "Professional majors" such as engineering, chemistry or mathematics, because they "all reek of practicality." Nor, we were told, did the preppy go for intellectually demanding subjects such as philosophy or linguistics because, "they smack of an equally undesirable effort."

And there's the rub. Unless you actually have a fat trust fund to underwrite your nonchalance, an aversion to effort is hardly a strategy for success. Which may explain some of our national woes.