"Wait for Me!": The memoirs of the last of the Mitford girls 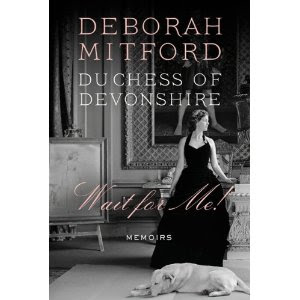 "Money and illness and sex were not talked about in those days and they are the only things people talk about these days, aren't they? ... Self-pity and self-esteem, which are now the key things in school, were not allowed. Self-esteem? Nanny used to say, 'Who's going to look at you?'" - Deborah Cavendish (nee Mitford)

"This last surviving member of the Mitford clan has written a memoir old-fashioned in its unwillingness to spill the beans, yet one which is still rich enough in anecdote to be unputdownable."

Bel Mooney at The Daily Mail reviews the newly-published memoirs of Her Grace the Dowager Duchess of Devonshire, perhaps better-known to the world by her maiden name of Deborah Mitford. Known within the family as "Debo," the Dowager Duchess's memoirs sound fascinating and I've ordered my copy to keep as a treat for finishing Popular's sequel in October - along with the official biography of Queen Elizabeth the Queen Mother, C.J. Sansom's new novel Heartstone, Charlaine Harris's Dead Until Dark and re-reading Elena Maria Vidal's Madame Royale and William Boyd's Any Human Heart. So looking forward to two weeks of doing absolutely nothing.

I've always had a great admiration for the Duchess. My grandmother told me a story that, during the Blitz, coming across a working-class woman sitting amidst the bombed out ruins of her house, Deborah walked over and handed her her diamond engagement ring, to sell and re-start her life with. It's easy to see why she is so respected and why she managed to keep-up amicable relations with all over her, often-quarrelling sisters. However, some harsh words are reserved in the memoirs, apparently, for the brilliant but difficult Nancy, who (it was recently discovered) was actually one of the sources writing to the British government recommending the imprisonment of her pro-fascist sister, Diana, during the Second World War.

Copies of Wait for Me! can be ordered here. (And, on a side note, I couldn't agree any more with Miss Mooney's description of inheritance tax/death tax/death duties as a "crippling abomination.") 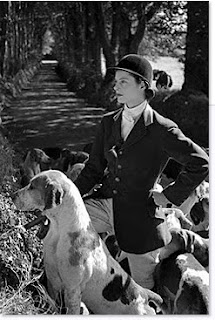 To quote from The Daily Mail review: -

The 90-year-old Dowager Duchess of Devonshire - upper class to the very soil on her gumboots - has her downstairs loo lined in silver paper and decorated with images of her idol, Elvis Presley. The former chatelaine of magnificent Chatsworth, Derbyshire, now lives in a former vicarage in a village not far from the great house, and once a year (as part of the village fete) allows people in to look around.
Sometimes the curious strangers are disappointed and say things like, ‘I came to see the chandeliers and all I got was Habitat.’ Deborah Devonshire sees nothing wrong with Habitat and ‘anyway, the disappointing lantern was from Conran and just what I wanted.’ Good for her.
I reached page 334 of her memoirs before those unexpected revelations, but was already unwillingly captivated by this extraordinary woman.
Her life is a story from an age now gone - and yet she resides with admirable joie de vivre in ‘this strange new world we live in’. She is the kind of person who leaves you helplessly reaching for cliches, such as ‘we shall not see her like again.’
The book’s title reminds us that the youngest Mitford girl was always going to be outraced by her older siblings, two of whom (Nancy and Jessica) gained writing fame with which she doesn’t hope to compete.
The Mitford sisters have already generated a mini-publishing industry, and for good reason. The fascinating, unconventional and often appalling aristocratic family led extraordinary lives which intersected with important 20th-century figures such as Churchill, Mosley and John F. Kennedy (to name but three) as well as exemplifying the great political divide of their day.
To recap: Nancy was a talented writer with a sharp, snobbish side, but politically on the left. Pamela was the conservative country-lover whom the poet John Betjeman loved (for a while). Beautiful Diana scandalously left her millionaire husband for Sir Oswald Mosley, was interned in Holloway and never renounced fascism. Unity worshipped Hitler and all he stood for and tried to kill herself when Britain declared war. Jessica was a best-selling author who became a communist, eloped with her cousin (Churchill’s nephew) to join the Spanish Civil War, and was later a civil-rights activist in the States. The baby of the family, the Hon Deborah (or Debo as she is universally known) quietly married Andrew Cavendish, who became Duke of Devonshire after his older brother was killed in the war. She devoted her life to the family business - the great house of Chatsworth. There was also (somewhere in the middle) brother Tom, who died as a soldier in Burma in 1945. According to his sister Jessica’s letters, he unofficially supported British fascism and chose to go to Burma after refusing to fight in Europe. Deborah Devonshire glides over this, simply suggesting that his friendship with certain upper-class Germans ‘made him recoil at the idea of being part of the victorious army that would advance through Germany to finish the job’. This is one of many places in this book where you long to know more, but the author remains tight-lipped, commenting only: ‘It is my last regret that I did not know my brother better.’

Deborah's eldest sister, best-selling novelist and Dior muse, Nancy Mitford
Her parents had already separated, partly because her father (2nd Baron Redesdale, known as ‘Farve’) allowed his conservative patriotism to overcome a natural admiration for Hitler, whereas ‘Muv’ (a complex and distant woman) ‘refused to consider Hitler a threat and believed that it was a mistake to go to war.’ Again, there is no retrospective soul-searching about this. Debo Devonshire - a natural Conservative, although she maintains that she is unpolitical - passionately believes in reticence and will surely take many secrets to the grave. It’s hard not to wonder what her husband the Duke thought when the debonair Jack Kennedy telephoned his wife in the middle of the night to chat about this and that...The friendship between the two families began when Deborah was a debutante with Kathleen Kennedy, known as ‘Kick’. Despite the difficulties of a Catholic marrying a Protestant, Kick married Billy, brother of Andrew and heir to the Devonshire title - until he was killed in 1944. Kick became another Kennedy tragedy, dying in a plane crash a few years later. The Duke and Duchess of Devonshire attended Kennedy’s inauguration, where they were made a fuss of. It’s not hard to imagine why the rakishly attractive Jack was rather entranced by the aristocrats - especially Deborah.
The names come thick and fast: writers, aristocrats, artists, louche hangers-on, politicians and heads of state... At one point I wondered why the publishers did not supply something as basic as a family tree - if only so that we could place the new generation, such as the Duchess’s grand-daughter, model Stella Tennant. But, in the end, reading this book becomes rather like gazing at a glorious tapestry on the walls of a stately home - where you’re not quite sure who all the people are but can revel in the grand sweep of the whole - its faded, old-fashioned shades.
Reading between the lines of this family story, I suspect that Debo Devonshire inherited the best characteristics of the lot - which might be summed up as natural (if uneducated) wit, a highly developed eccentricity, a capacity to buckle down and get on with the task in hand (like milking a cow for the first time, because the war made it necessary), and an absolute dedication to the concept of noblesse oblige.

That sense of duty will not be understood by anybody who reads with a block of wood in the eye as well as on the shoulder. The unsympathetic reader will see only privilege, whereas I marvel at the energy of a woman who threw herself into helping her alcoholic husband face the crippling abomination of death duties and working to save Chatsworth as a place of beauty and education which brings pleasure to millions.
She writes with restrained dignity and quiet intelligence about Andrew’s struggle with the addiction which ran in his family and came close to fatally damaging his marriage.
In fact, there is an undercurrent of sadness all the way through, even in a book as elegantly restrained in matters personal - for when somebody reaches a great age he or she will inevitably remember past mistakes and sorrows, even while celebrating the ‘continual delight’ of the present. Yet it remains mostly unspoken - and you are left with an impression of a good life, lived with courage and gusto, by a woman who can surely allow herself to feel a smidgen of pleasure that she has transformed herself into yet another writing Mitford, with a cracking story to tell.
Posted by Gareth Russell at 15:11