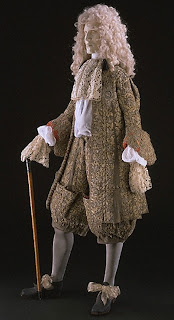 Via Tea at Trianon comes an account of the sumptuous wedding suit worn by the future King James II when he married his second bride, the lovely Italian princess, Maria-Beatrice of Modena, in 1673. The suit, shown above, is still preserved and on display in the Victoria and Albert Museum in London.

James's time as King in Britain was short, lasting only from 1685 until he was deposed in 1688. He and Maria-Beatrice were to spend the rest of their lives in exile, as guests of the French Royal Family, with Maria becoming an important figure in Court life at the recently-completed palace of Versailles, where she was much admired.

James, then Duke of York, had been married before, to the late Lady Anne Hyde, who had lost her battle to cancer two years earlier. With Anne, James had fathered eight children, although only two survived - the future queens, Mary II and Anne. With the beautiful Maria (or, to give her her full name, Maria-Beatrice-Eleanora-Anna-Margareta-Isabella d'Este of Modena), James was to have a further seven children - Catherine-Laura (died at the age of ten months), Isabella (died aged five), Charles, Duke of Cambridge (died as a baby during the smallpox epidemic of 1677), Elizabeth (died a few weeks after her christening), Charlotte-Maria (died of a possible allergy at the age of three months), James Francis Edward, regarded as "King James III" by his father's supporters and "the Old Pretender" by those who supported James II's exile (1688 - 1766) and Princess Louisa-Maria (1692 - 1712), who was born during the royal couple's exile in France.

The couple and their surviving children lived out most of their exile in the magnificent château of St. Germain-en-Laye (below), a gift to them from King James's cousin, Louis XIV. James II died there in the autumn of 1701 and he was originally buried in the Chapel of Saint Edmund in the Church of the English Benedictines on the Rue St Jacques in Paris. James was followed to the grave eleven years later by his daughter, the unmarried Princess Louisa-Maria, who died at St.-Germain at the age of nineteen in the spring of 1712, to her mother's great distress. The princess's body was taken to the Church of the English Benedictines, to rest alongside her late father's. Queen Maria-Beatrice died six years later in the early summer of 1718, after an agonising battle with cancer. She was buried in the Abbey of the Visitation of Saint Mary at Chaillot. The bodies of King James, Queen Maria-Beatrice and Princess Louisa-Maria were all destroyed during the French Revolution. 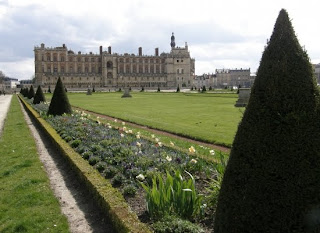 After a failed attempt to retake the British thrones in 1715, James-Francis re-settled in Rome, where he married Princess Maria-Casimira of Poland and fathered two sons - including the future "Bonnie Prince Charlie" of legend. James-Francis or, "James III and VIII" as his most loyal adherents had known him, passed away as a guest of the Papacy on New Year's Day 1766 and he was granted the honour of being buried in Saint Peter's Basilica.


Today, James II and Maria-Beatrice of Modena have no mutual living descendants. All of their children, bar James-Francis, died before they could reproduce and of James-Francis's two children - "Bonnie" Charles-Edward's marriage to Princess Louisa-Maximiliana von Stolberg-Gedern was barren and his younger brother, Henry-Benedict, entered the Roman Catholic Church and became Cardinal of Santa Maria.
Posted by Gareth Russell at 18:09