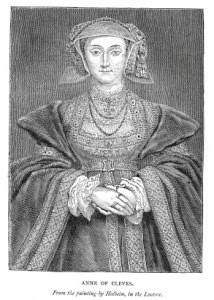 "On this day in history, the 22nd September 1515, Anna von Jülich-Kleve-Berg, or Anne of Cleves, was born near Düsseldorf. She was the second daughter of John III, Duke of Jülich, Cleves and Berg, an important German ruler, and Maria of Jülich-Berg. Elizabeth Norton writes of Anne’s grand lineage – not only was she descended from Edward I, she was also, on her father’s side, closely related to Louis XII of France and the Duke of Burgundy."

Claire at The Anne Boleyn Files commemorates the anniversary of the birth of Anne of Cleves, Queen of England, the fourth wife of King Henry VIII. To date, Anne holds the record of having held that title for the shortest period of time amongst the confederacy of consorts, having been Queen from January until July of 1540. In second place is another unlucky German princess, Caroline of Brunswick, the consort of George IV, who held the title from January 1820 until her death in August 1821. Anne's predecessor, Jane Seymour, her successor Catherine Howard, Richard II's child-bride Isabelle de Valois and Richard III's wife, Anne Neville, were other women who did not long enjoy their throne.
Posted by Gareth Russell at 22:34