"The Queen of Maryland" 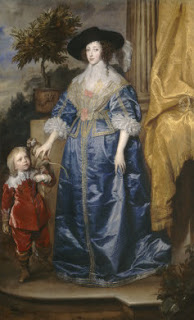 Historical novelist, Elena Maria Vidal, profiles the life of Henrietta-Maria of France, Queen of England, Scotland and Ireland, wife of King Charles I and mother of Kings Charles II and James II. The daughter of King Henri IV of France and his second wife, Marie de Medici, Henrietta-Maria married the new King of England in 1625 and remained by his side until the traumas of the Civil War, which took her husband's life. It was in the Queen's honour that the future American state of Maryland, Elena Maria's home State, was named.


"In the lone tent, waiting for victory,
She stands with eyes marred by the mists of pain,
Like some wan lily overdrenched with rain:
The clamorous clang of arms, the ensanguined sky,
War's ruin, and the wreck of chivalry
To her proud soul no common fear can bring:
Bravely she tarrieth for her Lord the King,
Her soul a-flame with passionate ecstasy."
- From Henrietta Maria by Oscar Wilde
Posted by Gareth Russell at 15:26