"The beauteous Anne Boleyn and the guilty Catherine Howard" 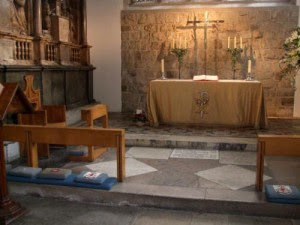 "In front of the altar, repose the beauteous Anna (sic) Boleyn, and the guilty Catherine Howard, two ill-fated wives of Henry VIII".
- The History and Antiquities of the Tower of London by John Bayley (1830)

Claire Ridgway at The Anne Boleyn Files concludes her series of posts on the exhumation of several bodies in the Tower's Chapel of St. Peter-ad-Vincula and concludes that there is no good reason to conclude that the body exhumed in 1876 was not, in fact, the remains of "the beauteous Anne Boleyn." Claire writes:

"My conclusion is that there is no reason to think that the Victorians were wrong in their identification of Anne Boleyn’s remains. I know that their identification relied on circumstantial evidence, the fact that the body lay where they expected to find Anne Boleyn, but there is no hard evidence to suggest that it wasn’t Anne."
The 1876 exhumation and whether they were Anne Boleyn's, Jane Boleyn's or Catherine Howard's, also feeds into the intense academic debate over Anne's date of birth, which was discussed on this blog, where I put forward the case for the minority position - arguing that Anne was born in 1507, not 1501, as is commonly argued by most historians today. (And as proof of how seriously Tudor enthusiasts take this debate it is, so far, the single most commented upon post on this blog.)
Posted by Gareth Russell at 00:49