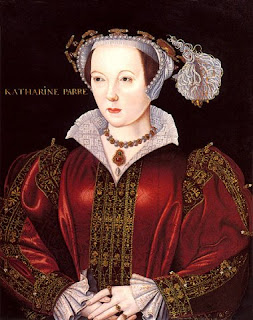 "She was not a pretty woman, or a beauty, but rather comely with red-gold hair and hazel eyes ... Katherine's looks, however, were not her chief attraction. People were drawn more to her warm and amiable personality and her intellectual qualities; she exuded goodwill... Katherine was also to prove popular with most people, mainly because she had a pleasant manner with both nobility and servants alike. Her chaplain, John Parkhurst, who later became Bishop of Norwich, remembered in his latter years that she was 'a most gentle mistress'. Perhaps the most outstanding thing about her was her formidable intellect, which had been cultivated to an unusual extent by her mother and by the people with whom she associated herself in later life. She was perceptive, articulate, thirsty for knowledge, both general and religious, and industrious. Her virtue, a female quality always suspect in an age that believed that teaching women to write would encourage them to pen love-letters, was beyond question."
- The Six Wives of Henry VIII by Alison Weir (1991)

On this day in 1548, Katharine Parr, Queen Dowager of England and Ireland, died an agonising death at the age of thirty-six. She had outlived her third, and most notorious, husband by just over eighteen months and had died as a result of trying to give her fourth husband, Lord Thomas Seymour, a son and heir. Instead, the former Queen had given birth to a sickly daughter and she herself was now "lying on my death-bed, sick of body but of good mind and perfect memory".

In fact, however, Katharine was of anything but "good mind and perfect memory" as the full agony of puerperal fever set in, just hours after the delivery. For a week after her daughter Mary's birth, Katharine Parr (or Katharine Seymour, as we should now properly call her), sank further and further into a sweat-soaked delirium in her beautiful bedchamber at Sudeley Castle, her husband's favourite home. (Below.) 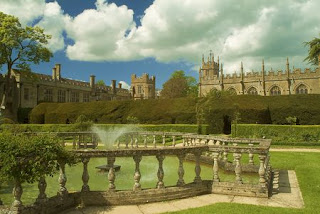 She was now tortured by memories of her husband's faithlessness to her, recalling the torture of discovering his inappropriate advances to the teenage Princess Elizabeth, the future Queen, and then a ward in Katharine's household. Elizabeth had been sent away to stay with family friends, in the hope of avoiding further scandal. That she was moved before she was essentially raped by him is one of the few mercies of the young Elizabeth Tudor's life. In her head, the Queen became to develop paranoiac fantasies about the incident, imagining that her husband was "laughing" at the idea of her impending death, so it would leave him free to marry the pubescent Elizabeth or her half-sister, the Princess Mary. There were even rumours that, if he could not get them, Seymour would attempt to wed another former queen, Anne of Cleves. Yet, it was Elizabeth who loomed largest in Katharine's mind and devastatingly for all concerned, she confided these fears to her lady-in-waiting, Lady Tyrwhitt, who was to remember them and subsequently report them to the Council, nurturing a cancerous resentment against Thomas Seymour for his cruel betrayal of his wife's trust. Less fairly, Lady Tyrwhitt was to develop similar feelings for Elizabeth, as well.

Wracked with guilt at his wife's accusations, Seymour lay down on the bed next to her, cradling her in his arms. After a few moments, the Queen Dowager became agitated and began shouting at him, demanding he let her go and remonstrating against him. She was, so Lady Tyrwhitt later claimed, "sore disquieted" to have Thomas lying so close to her.

Later in the day, Katharine's fever subsided slightly and she made her Will, having it witnessed by her physician, Dr. Huicke and her chaplain, Rev. Parkhurst, in which she left everything to "my married spouse and husband". She knew she was now in "the extremity of death" and, as a good Protestant, there is no record of Katharine asking for the Last Rites. She passed away in the small hours of the morning and she was laid to rest at Sudeley Castle, in a magnificent funeral organised by her husband, with the young Lady Jane Grey acting as chief mourner.

Katharine Parr, famous for being the wife of Henry's who "survived," had not had the happy ending we might have hoped for. She did not suffer the public martyrdoms to history of either Anne Boleyn or Catherine Howard, nor the humiliations of Katherine of Aragon, which were to secure for her an almost immaculate historical reputation in the centuries to come. Instead, Katharine suffered the far more subtle tragedy of domestic unhappiness, when her fourth husband - the man she married for love after the terror of being Henry VIII's queen - betrayed both her happiness and her trust by molesting the teenage princess whom Katharine had brought into her care.  It was a cruel and tragic betrayal which few women can have deserved less than Katharine Parr.
Posted by Gareth Russell at 14:41