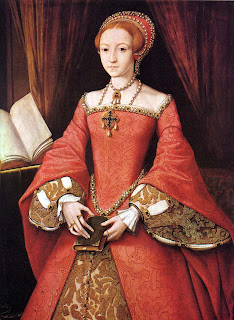 For someone who was to go down in history as “the Virgin Queen,” there were certainly enough signs of the most famous of virgins surrounding Elizabeth Tudor’s birth. To begin with, she was born on September 7th, the day before the Church celebrated the Feast of the Nativity of the Blessed Virgin – the Virgin Mary’s liturgical birthday. (And, just as she was born on the day before one of the Virgin’s great feast-days, so too would Elizabeth die on March 24th, one day before the Feast of the Annunciation in 1603.) According to an old tale, Elizabeth’s mother, Queen Anne Boleyn, had selected a tapestry displaying the legend of Saint Ursula, one of Christianity’s most beloved virgin-saints, to hang in her birthing chamber. The birth took place at three o'clock in the afternoon at the beautiful palace of Greenwich, a red-brick residence alongside the banks of the Thames, famed for the beauty of its gardens and one of King Henry's favourite homes.
The baby princess’s gender, as everybody knows, was a terrible disappointment to both of her parents and a subject of ill-contained glee to their many opponents. However, it was not quite the death-knell in Henry and Anne’s marriage that later tradition was to suggest, nor is there any evidence to suggest it affected their treatment of her. Henry was always a capricious parent, alternating between indifference and indulgence, whilst Anne was a devoted mother and, as Elizabeth's biographer, Dr. David Starkey, has written - "her mother plainly adored her."


At the time, apart from upset at the baby's sex, many people were simply relieved that the Queen had not only had a fairly easy delivery, but that she had lived through it at all. The last trimester of Anne Boleyn’s pregnancy had been a difficult one, something common to many thin women. As July and August had rolled on, the Queen’s health had suffered, the Court’s Summer Progress was cancelled and the King was so concerned about his new wife’s well-being that he had ordered that all news which might upset her be withheld. It is therefore highly doubtful that when she took to her chamber to give birth Queen Anne even knew that, at long last, the Pope had ruled on the subject of King Henry’s marriage. According to the Pontiff, Henry was still legally wed to his first wife, the exiled Katherine of Aragon, and as such, not only was Anne’s queenship illegal, but her forthcoming child was a bastard. Characteristically, the Pope’s edict came too late to save Katherine, but just in time to cause serious trouble for Anne – which was probably the intention. At the age of twenty-six, Anne Boleyn was also slightly late by the standards of her class to be going through her first childbirth. Henry’s first wife had also been a late bloomer, having gone through her first pregnancy at the age of twenty-four, but, in the case of both women, there had been a set of extraordinary circumstances delaying their marriage to the King. Baby Elizabeth also seems to have been born somewhat premature - since Anne did not take to her chamber until August 26th, less than two weeks before the birth, when the traditional withdrawal period was one month. This suggests that Elizabeth was probably conceived sometime around Christmas 1532 or early January which means that, even if the marriage ceremony in January 1533 was her parents' only service (which it wasn't, since we have evidence from both sides of the ideological aisle for the date in November too), the reason cannot have been that Anne knew herself to be pregnant at such an early stage. All that, of course, is by the by and an object of curiosity only to the historian and, later, to Elizabeth herself. What mattered at the time was that an Elizabeth had joined the royal nursery, not an Edward.
Had Elizabeth been a boy, of course, her mother's new found title would have been unassailable. Even opponents of her marriage, like Sir Thomas More, had been prepared to “wait and see,” on the issue of her children. If Anne had produced the longed-for son and heir, then all the criticisms of her would have evaporated and her predecessor regarded as a cantankerous irrelevance. As More had said, if the new Queen did produce a prince, then it would be to the “rest, peace, wealth and profit” of the entire country. No matter how much anyone liked Katherine of Aragon, they would have liked a Prince of Wales and a stable succession a lot more.

Throughout 1533, the progress of Anne Boleyn had been seemingly unstoppable. At long last, everything seemed to be going her way. She and the King had finally been married in November of the previous year, going through the proscribed second Nuptial Mass in January, by which time Anne must have already been pregnant with Elizabeth – although, she cannot have known it yet. At her lavish Coronation in the early summer, foreign observers noted that “the English sought, unceasingly, to honour their new princess… everyone strove to be as attentive and solicitous as possible to serve their new mistress.” It seemed so unlikely that the culmination of a year of triumph would have been the anti-climax of the birth of a daughter, rather than a son.

Still, although a son would have rendered the Queen untouchable and the King vindicated, a daughter was not a complete disaster and the King and Queen ensured that everything was done to mark the birth of their daughter with the splendour customary for a princess’s birth. Like her mother’s coronation, Elizabeth Tudor’s christening was almost theatrically Catholic, adhering down to the last detail to the medieval way of doing things. As her mother naively hoped and her father insisted, it was a way of proving to the English people that the Papacy and Catholicism were not, necessarily, one in the same thing and just because England had now severed her ties of loyalty to Rome, it did not necessarily follow that it would therefore become a hard-line Protestant nation. The Pope may be dethroned, but the Host was still in the Tabernacle and the Virgin on her plinth. It was business as usual.
Aside from being the heiress to the controversy of Henry VIII’s second marriage, Elizabeth also inherited a decidedly mixed bag of genetics. Had everything gone well, as it did for her Scottish cousin Mary, Elizabeth might very well have turned out to be one of the great beauties of royal history. In their prime, both of her parents had been considered highly attractive; although regarded as too thin and too dark by the English, Anne Boleyn had been compared to Venus by the French. Generally speaking, the Boleyns, the Tilneys, the Butlers and the Howards were considered good-looking families, particularly Anne Boleyn’s mother, who had been the subject of poems to her beauty. On King Henry’s side, Elizabeth’s grandmother, the late Queen Elizabeth of York, and her mother, Queen Elizabeth Woodville, had been ranked as some of the most exquisite beauties of their generation, with coveted ivory skin and long, golden hair. Elizabeth’s recently deceased aunt, Mary, the Dowager Queen of France and Duchess of Suffolk, was very beautiful, with lovely ginger hair and alabaster skin, although none of her daughters seemed to have been so lucky. Going back to her great-great grandmothers, Jacquetta of Luxembourg and Queen Catherine de Valois, Elizabeth could count yet more beauties in her ancestry, along with some very handsome men – George, Lord Rochford (her uncle), Thomas Boleyn, Earl of Wiltshire (grandfather) and King Edward IV (great-grandfather.)

Yet it was not all six foot-tall Adonises and porcelain-pale beauties in Elizabeth Tudor’s family tree. The features of her great-grandmother, Lady Margaret Beaufort, could generously be described as “distinguished,” while the heavy, long faces of her grandfather, King Henry VII, and her aunt, Margaret, Queen Mother of Scotland, showed that their was an aesthetic downside to belonging to England’s most prestigious dynasty. Elizabeth was lucky, in that she inherited two of her mother’s best features – her dark eyes and her waif-like physique – and, from her father, she inherited the flawless ivory skin of the Yorks and the Woodvilles and the Tudors’ distinctive ginger hair. However, she also inherited her father’s rather small mouth and, most damagingly, the long, aquiline nose of the Beauforts. Basically, there was enough of Anne Boleyn, Elizabeth of York, Elizabeth Howard and Elizabeth Woodville in Elizabeth Tudor to make her attractive, but too much of Margaret Beaufort and Henry VII to make her beautiful.

Ordinarily, given how close she had been born to one of the great festivals of the Virgin, it would have been expected for the baby princess to receive the baptismal name of Mary. However, the King already had a daughter with that name, from his first marriage. With that union’s annulment, Mary Tudor had lost the title of “princess,” to her great distress, and there were rumours in the Spanish Embassy that the new Queen planned to christen her daughter Mary, anyway, in the hope that the new Princess Mary would utterly eclipse the old one in the public’s mind. As with so many of the Spanish-started rumours about Anne Boleyn, this story was groundless, for there doesn’t seem to have been any hesitation on either the King or the Queen’s part in naming their new daughter, Elizabeth. It was the most logical name to go for. Both the King and the Queen had mothers with that name – Henry’s long-dead royal mother, Elizabeth of York, who had passed away in childbirth thirty years earlier and the Queen’s still-living mother, the Countess of Ormonde and Wiltshire. And so it was probably as a mutual maternal tribute that Henry VIII and Anne Boleyn selected the name for the baby that was destined to be their only child together and thus christened the girl who would arguably become the single most famous woman in her country’s history.
Posted by Gareth Russell at 16:57