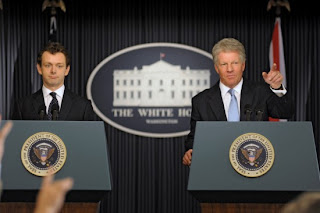 Having already tackled his relationship with his successor, Gordon Brown, and the monarchy in The Deal (2003) and The Queen (2006), Stephen Frears has returned to the subject of Tony Blair's career as Prime Minister in HBO's amazing new movie, The Special Relationship, which tells the story of Blair's relationship with the then-President of the United States, Bill Clinton, at the time of the Northern Irish Peace Process.

President Clinton, played by Denis Quaid, is joined by Hope Davis as First Lady Hillary Clinton, with the amazing Michael Sheen reprising his role as Blair, with Helen McCrory returning as Cherie Blair and Mark Bazeley playing New Labour's spin doctor, Alistair Campbell, as he did in The Queen.

The trailer can be watched here.
Posted by Gareth Russell at 18:20