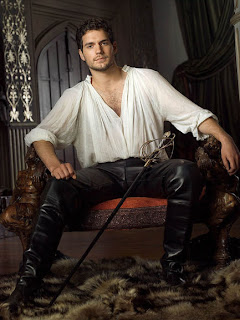 Over at The Anne Boleyn Files, Claire Ridgeway defends the recent television series, The Tudors, which chronicled the life of Henry VIII (Jonathan Rhys Meyer) from the half-way point of his marriage to Katherine of Aragon (Maria Doyle Kennedy) until his death after four years of marriage to Catherine Parr (Nip/Tuck's Joely Richardson.) Along the way, Rhys Meyers (whose performance was probably the most controversial in the series and, to my mind, the least convincing) was joined by the award-winning Sam Neill (Cardinal Wolsey) and Jeremy Notham (Sir Thomas More), as well as by pop star Joss Stone (Anne of Cleves), Pride and Prejudice's Tamzin Merchant (Catherine Howard), I Capture the Castle's Henry Cavill (pictured right as the Duke of Suffolk), the fantastic Natalie Dormer (Anne Boleyn), True Blood's James Frain (Thomas Cromwell), Rome's Allen Leech (Francis Dereham), The Exorcist star Max von Sydow (Cardinal von Walburg), Burn Notice's Gabrielle Anwar (Princess Margaret Tudor) and eight time Oscar-nominee, Peter O'Toole (Pope Paul III.)
Dr. David Starkey, author of The Reign of Henry VIII: Personalities & Politics, Six Wives: The Queens of Henry VIII, Elizabeth: Apprenticeship and Monarchy, was scathing in his criticisms of the show's many inaccuracies. In one radio interview, he acerbically remarked: “I’ve got no problem with getting history wrong for a purpose – Shakespeare often got things wrong for a reason. But it’s the randomised, arrogance of ignorance of The Tudors.”
However, Claire and The Anne Boleyn Files join Dr. Tracy Borman, author of Elizabeth's Women: The Hidden Story of the Virgin Queen, in defending the show. As Dr. Borman wrote: -

“Having been determined to loathe the hugely popular BBC series, with its unfeasibly beautiful actors, dodgy costumes and improbable storylines, I found myself becoming strangely addicted…I grew to appreciate The Tudors for its merits as an historical drama. Yes, the scriptwriters may have taken liberties with the facts, but they have also succeeded in recreating the drama and atmosphere of Henry VIII’s court, with its intrigues, scandals and betrayals... Television dramas, films and novels offer a way in to history and can inspire an abiding passion for the subject. Provided that they encourage people to find out what ‘really’ happened, rather than being treated as reliable historical sources in their own right, then they can and should be respected as a force to be reckoned with in the world of history.” 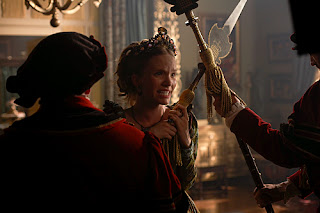