October 16th, 1793: The Execution of Marie-Antoinette

"I was a queen, and you took away my crown; a wife, and you killed my husband; a mother, and you deprived me of my children. My blood alone remains: take it, but do not make me suffer long."
Lancelot de Carles and the Portuguese author of the Alcobaca account said that when Death came for Anne Boleyn in 1536, she was still at the height of her beauty. The glossy brunette tresses were immaculately coiffed; the glistening dark eyes, the long, elegant fingers, the trim waist and the smooth skin were all still intact in the waif-like 28 year-old. Her jailers had treated her with respect – bowing as they entered her presence; the Constable of the Tower even stammered over his words in informing the Queen that the time had now come to die. It was left to Anne to offer soothing words of polite comfort to her gaoler, rather than the other way round. On the scaffold, thousands had knelt before a woman who was still young, still glamorous and still beautiful.
When they came for Catherine Howard in 1542, the teenage Queen still radiated that potent mixture of vulnerability and sexuality which had made her so lethally attractive to men. When they came for Jane Grey in 1554, she was dressed demurely in black – still the perfect, prim, Protestant porcelain doll, her eyes aglow with quiet ecstasy at the prospect of being martyred for her faith. When they came for the Romanov Grand Duchesses in 1918, they were all young, all pretty; their ages ranged from twenty-two to seventeen. Olga, Tatiana, Maria and Anastasia were still recognisably the iconic princesses who had stared out from hundreds of photographs celebrating the domestic bliss of Russia’s last Imperial Family.
But when they came for Marie-Antoinette in 1793, France’s most iconic queen was no longer beautiful or even pretty. Rather, she was in every way – apart from the curious beauty endowed by dignity – positively and undeniably ugly. The sufferings she had endured over the last four years and especially in the last thirteen months had destroyed what remained of her good-looks. As the poor woman sat writing her last letter between the two fat wax candles in the grim, cold and dank prison cell at the Conciergerie in the pre-dawn darkness of October 16th 1793, anyone hoping to see the one-time goddess of ancien régime sophistication would have been cruelly disappointed. The trim waist which had once been encased in Rose Bertin’s legendary creations of haute couture had thickened and coarsened; the beautiful fair hair which the celebrity coiffeur, Monsieur Léonard, had once styled into everything from towering poufs decorated with diamonds, jewels, powder and feathers, to simple chignons inspired by country-maids, was long gone. The Queen’s hair had turned entirely grey over the last year and it had even begun to fall out. That skin – the ivory-white smoothness of which had once caused her aristocratic contemporaries to fall into raptures of both praise and jealousy – was no longer alabaster, but rather emaciated, almost ghostly. The skin had begun to sag as well, around her chin, neck, cheeks and eyes, in particular. The sparkling blue eyes, shared by so many of the Queen’s Hapsburg relatives, had dimmed and clouded over, as the days and weeks spent in a darkened prison cell ruined her eyesight. She was thirty-seven years-old.
In the last forty-eight hours, the Queen had eaten almost nothing and her body was now rapidly beginning to fall apart, as if it too sensed that the end was near and that there was no point in holding itself together any longer. The Queen’s monthly period had started a few days earlier, but it had quickly degenerated into a frightening case of vaginal hemorrhaging. She had to constantly change her menstrual linens and trying to find the time to do so discreetly, when she was apt to be interrupted by the revolutionary guards at any given moment, was difficult. For a woman who was always so protective over her privacy and mortified by nudity, it was particularly humiliating set of circumstances. 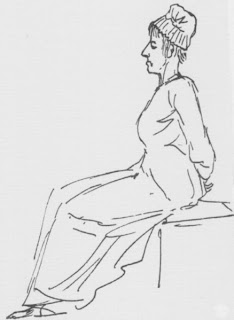 When the cart went past the Rue St.-Honoré, the great revolutionary artist, Jean-Jacques David, made a quick sketch of the Queen. It was heroically vicious, showing her proud, disdainful, bloated and ugly. However, as one of the queen’s later biographers noted, “Not even hatred, which made this picture, can deny the awful dignity with which Marie Antoinette endured the shame of her drive to the place of execution.” Seeing the sketch for the first time in 1955, Diana Mitford, Lady Mosley, wrote that it was enough “to bring tears to one’s eyes”; what David saw as ugly disdain, others were to see as heroic dignity. History is very much in the eye of the beholder.
Over an hour later, the cart finally reached the Place de la République, once the Place Louis XV now the Place de la Concorde, where the guillotine stood before a large statue of the Goddess of Liberty; “Lady Liberty,” as she would be renamed, when her image was re-invented, re-modelled and later exported to the United States in the following century. Liberty's cold, passive eyes stared down on the square, neither seeing nor knowing what was being done in the pursuit of the Revolution’s most seductive catchphrase. Earlier in the year, when the moderately republican Madame Roland had been sent to her death for insufficient zeal in the Revolution’s cause, she had turned to the statue and cried out, “O Liberty! What great crimes are committed in your name.” Marie-Antoinette made no such grand gesture, instead she simply stepped down lightly, “with bravado,” from the tumbrel and gazed up at the guillotine. Sensing a moment to make himself useful, the republican priest at her side spoke comfortingly, “This is the moment, Madame, to arm yourself with courage.” With death imminent, the Queen thawed and turned to him, with a smile: “The moment when my ills are going to end is not a moment when courage is going to fail me.”
She went up the steps confidently, stopping to apologise to the executioner when she accidentally trod on his foot. Having her hands bound behind her back limited her sense of balance and freedom of movement. She was strapped into place, lowered beneath the blade and secured. Sanson walked around her, flicked the lever and the blade fell. It was fifteen minutes after noon on Wednesday October 16th 1793 and Marie-Antoinette of Austria, Queen of France and Navarre, was dead, two weeks before her thirty-eighth birthday. Her body was hurled in a mass grave, where it was eventually lovingly recovered by French monarchists twenty years later and solemnly re-interred in the Cathedral of St.-Denis, where it rests to this day.
In the years since that terrible day in 1793, Marie-Antoinette has been constantly re-invented. Today, she is seen as both an icon of fashion and of wronged womanhood. The legend of Marie-Antoinette is a polymorphous one, in which the figure of the dead Queen has become everything from a gay icon to a de facto Catholic martyr; she is still considered by many European royalists to be “the incarnation of The Cause.” Feminists too have lamented over the sheer venom of the misogyny which was so brutally deployed against her by the Revolution; movie-makers are continually drawn to the story of a life which encompassed the twin polarities of privilege and privation, glamour and grief. But, it has been over seventy years since a truly realistic portrayal of her has been offered in an English-language movie. She has been dismissed by some scholars as "a feckless, ruthless and manipulative ultra-monarchist," while many others have been just as happy to present her as a self-indulgent bimbo – "frivolous without being funny, extravagant without being elegant." The false story of “Let them eat cake” is just one of many which refuses to go away, despite historians’ best efforts.
Those who knew the real Marie-Antoinette painted a very different picture of the vulgar airhead or naïve and lonely spendthrift so beloved by modern accounts of the last Queen of France. The Comte de St.-Priest, one of her husband’s political advisers, who had disliked her and positively loathed many of her friends, wrote: “She was never evil or cruel. She never betrayed France and at moments of great danger she showed a kind of magnanimity.” The English politician and writer, Horace Walpole MP, said: “Mine is not grief… No, it is all admiration and enthusiasm!” Marie-Antoinette was, for him, “an unparalleled Princess.” Georgiana, Duchess of Devonshire, remarked that if one wanted to gain the true measure of Marie-Antoinette then one only had to contrast her behaviour with that of her enemies. Edmund Burke's beautiful reflections on her life and downfall are amongst some of the most exquisite pieces of panegyric in the English language. But perhaps the fairest assessment of her personality comes from Maxime de la Rocheterie, who wrote: "She was not a guilty woman, neither was she a saint; she was an upright, charming woman, a little frivolous, somewhat impulsive, but always pure; she was a queen, at times ardent in her fancies for her favourites and thoughtless in her policy, but proud and full of energy; a thorough woman in her winsome ways and tenderness of heart..." Marie-Antoinette died a heroine and a lady. One does not have to be a monarchist to see that, obviously. The worst criticism that can be fairly levied against her is that, as a young woman, she was “a little frivolous, somewhat impulsive”. If such a criticism was the worst thing that one could have said against the leaders of the French Revolution, the world might have been a much happier place.
Posted by Gareth Russell at 19:06