The Queen and the Tsarina 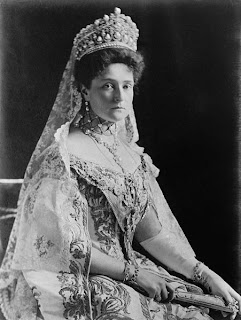 "Both women were vilified in ways that transcended all reality by their political enemies. In order to pull apart a family, destroy the image of the mother; in order to bring a nation into revolution, then destroy the reputation/ image of the queen/ empress, who was the mother figure of the people. If they could convince the people that the queen/empress was evil and that the king/tsar was an idiot, then it meant the children were no good and the entire family should be gotten rid of. It was a deliberate ploy. Antoinette and Alexandra are tragic because no matter what they did it played into the hands of their enemies.  The Great Catherine outwardly had lovers and no one held it against her and she was loved by the people. Napoleon's Josephine spent more money on clothes in one year than Marie-Antoinette did in her entire life and yet Josephine was popular with the French people. "

Via the blog The Sword and the Sea comes a report of a recent online debate on the Alexander Palace Forum debating who was more maligned - Marie-Antoinette, Queen of France (1755 - 1793) or the Empress Alexandra of Russia (1872 - 1918.) American novelist, Elena Maria Vidal, herself the author of two novels based on the lives of Marie-Antoinette's family, offers a judiciously even-handed comparison of both women.

The Tsarina's demonisation by the opponents of the Russian monarchy is tragic, as is the breakdown of her own health in the years after 1905. However, in terms of picking who was the more unfairly traduced, my own sympathies would probably lie on the side of Marie-Antoinette. One gains the impression that she was certainly the "nicer" of the two women - if you had to pick which one to have dinner with, I'm sure Marie-Antoinette would top most people's list. However, the fact that Alexandra was a difficult personality is in itself part of the tragedy of her life and death. Alexandra's determination and struggle to remain devoted to her marriage and her belief in absolute monarchy, even as she faced her own health concerns, the terrible tragedy of her only son's life-threatening illness and her inability to like the glittering, high society glamour of life in Saint Petersburg, is truly admirable. That she was eventually consumed by paranoic fantasies of conspiracy theories is tragic, but perhaps unsurprising.

Interestingly, during her first official State Visit as Empress of Russia, Alexandra visited Paris with her husband, Tsar Nicholas II, and stayed in the apartments at Versailles once occupied by Marie-Antoinette. Like many Victorians, Alexandra was genuinely fascinated by the tragedy of Marie-Antoinette and she kept a large portrait of the dead Queen of France in her own apartments at Tsarskoe Selo.
Posted by Gareth Russell at 03:47